the bigger the stage, the better robert griffin III gets 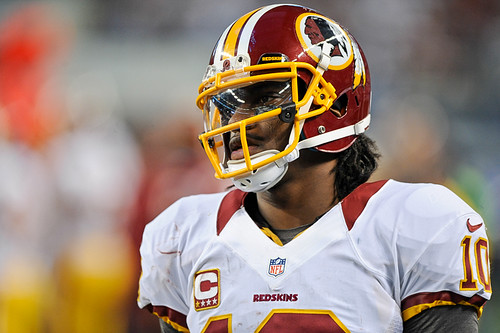 For most of the last 20 years, the Washington Redskins haven’t been very good at football.

For much of the last decade or so, they’ve been one of the doormat of the NFL — thanks to a dismal record and a knack for failing to show up in games with a heightened importance.

Anyone who has been a fan of this franchise for more than a few months should be able to close their eyes and instantly recall half a dozen or so disappointments — including letdown games seemingly whenever the Redskins found themselves in the national spotlight.

Simply put — no one outside the beltway ever had any reason to care about this team because whenever they saw them play, Washington usually found a way to lose.

Mercifully, it appears those dark days are over, thanks to a rookie quarterback by the name of Robert Griffin III.

This past Thursday, Griffin did something no other Redskins quarterback had ever done before — he beat the Cowboys in Dallas on Thanksgiving day.

With an entire nation watching, the face of the franchise completed 20 of 28 passes for 311 yards with four touchdowns, one interception and a passer rating of 132.6. While most Redskins players would have wilted in the spotlight, Griffin has already shown he’s not like most Redskins players.

Griffin III is the first player in NFL history to have four 60-yard passing touchdowns and a 60-yard rushing touchdown in a season.

Griffin torched the Cowboys when they sent five or more pass rushers, completing 6-of-7 passes for 131 yards and two touchdowns.

The former Heisman Trophy winner came into the league with unreasonable hype and expectations placed upon him, after the Redskins traded away a stockpile of high draft picks to land him, and yet, he’s still managed to impress.

Aside from suffering a concussion because he failed to get down quickly against Atlanta, Griffin has given critics and skeptics zero ammunition this season. Even when his team looks bad this year, he’s still managed to be Washington’s lone bright spot — like, for example, when his receivers dropped 10 passes in Pittsburgh.

Playing behind a mediocre offensive line, with a so-so receiving corps and a rookie running back, RGIII has already done the unimaginable — he’s made the Washington Redskins relevant once again.

Even though most casual sports fans were already tired of RGIII before he ever took his first NFL snap, thanks to endorsements of seemingly every product imaginable, Griffin  has managed to convert even the biggest Redskins haters into believers.

“I really have got to give kudos to the Redskins, Coach Shanahan, RGIII. That was as hot a hand in that first half, those plays that he made, the way that he played quarterback out there,” said Cowboys owner Jerry Jones. “I do want to give them a lot of credit. And anybody that watched that can see that RGIII was a huge difference-maker out there. That’s not an excuse; we just didn’t play well enough in light of how he played.”

This comes, of course, just one month after the entire New York Giants roster lined up to praise Griffin … even after they beat him.

“I’m pretty mad at the football gods for putting him in the NFC East,” he said. “A quarterback like that, he’s different from the Eli [Manning] and those guys. He presents … it’s just hard to gameplan that guy. He takes away from your enthusiasm for the game a little bit when you play a play perfectly and he still has 4.3 speed to outrun guys and make plays. I don’t think there’s anybody in the league just like him.”

Griffin’s numbers against NFC East opponents show just why so many rivals have so many positive things to say about the rookie quarterback.

Against New York, Philadelphia and Dallas, Griffin has completed 54 of 71 passes (76 percent) for 769 yards with 10 touchdowns and two interceptions with a 138.4 quarterback rating. With inspired play like that from football’s most important position, it’s only a matter of time before the Redskins are no longer a doormat in the division.

“You know, he’s kind of like Cool Hand Luke,” Shanahan said. “He doesn’t get too upset about anything. He just handles himself, and goes about his business, and works extremely hard to prepare for a game. And he knows how to avoid distractions, because he focuses on his job, and doesn’t seem to let anything bother him. And that’s why he has the success that he has, because he is very disciplined, and very determined, and he works at it.”

Even with Griffin running the show, Washington still went into the bye week a frustrating 3-6 record. Thanks to a combination of injuries, ineffectiveness and a defense that struggled to stop anyone, Shanahan and friends already appeared to be throwing in the towel.

And then word came out that — even though he’s only a rookie — Griffin had been voted a team captain. Forget the fact that in most NFL locker rooms, rookies are told to speak only when spoken to. Once again, RGIII isn’t like most rookies.

He also takes something as simple as being a team captain seriously. Since then, he’s thrown for 511 yards with eight touchdowns and one interception. Hell, he’s got eight touchdowns compared to just nine incomplete passes over the last two games and now the 5-6 Redskins are inexplicably one game out of a playoff spot.

How is that even possible?

“Every week it’s like you’re watching your boys playing a game of Madden,” said tight end Logan Paulsen. “Five touchdowns later, you’re like, ‘Well, it’s Madden. It’s not real life.’ That’s kind of how I feel when I watch him play.

Realistically, Washington’s chance of actually claiming a playoff spot this season are slim. But simply having Griffin involved at least gives the franchise a chance. And that’s all local sports fans have ever wanted — a chance to watch meaningful football.