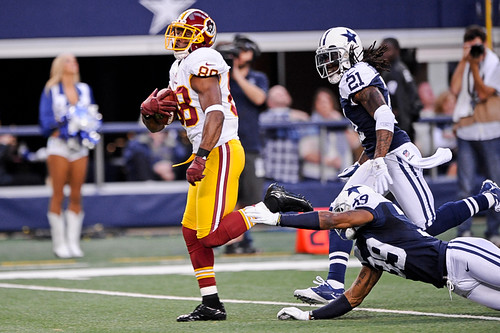 1. “How It Starts” by The Features

While many local sports fans felt good after the Washington Redskins 31-6 beatdown of the hapless Philadelphia Eagles one week ago, there was a lot less reason for optimism heading into their Week 12 match-up.

The Redskins had never beaten the Dallas Cowboys on Thanksgiving day (0-6). They had yet to earn a victory at the new state-of-the-art Cowboys Stadium (0-3). Quarterback Tony Romo had never lost at home during the month of November (14-0). Oh, and the last time the Redskins actually won on Thanksgiving was back in 1973.

Thankfully, the league decided to go ahead and play the game anyway.

And what a game it was for the burgundy and gold, who finally put together a respectable performance while playing in front of a national audience as they earned an impressive 38-31 victory over their most hated rival.

All it took was one quarter of action to show that, as long quarterback Robert Griffin III is involved, anything is possible. For the second game in a row, RGIII could do no wrong — completing 20 of 28 passes for four touchdowns, one interception and a QB rating of 132.6.

Everything you thought you knew about the Redskins needs to be reconsidered. All of the tired storylines that have saddled this franchise in recent history (can’t win primetime games, can’t beat rookie quarterbacks, etc.) are slowly being washed away for good.

This kid represents the dawn of a new day in D.C. and even though the Redskins currently have a losing record (5-6), they’re quickly becoming a team no one wants to play.

“Easy to see why they moved up in the draft to get him,” said Cowboys head coach Jason Garrett. “I think that everybody was really impressed with him in college; he was such a dynamic player at Baylor to win the Heisman Trophy. I think he’s been able to carry that same skill set to the NFL. Again, they use him well, they do those things that he did in college and he’s very effective at that. But he’s also shown he’s effective at doing other things. And he makes everybody else better.”

2. “Blessed To Be A Witness” by Ben Harper

As I mentioned earlier, Griffin and friends put together a 15-minute stretch that was so action packed, so enjoyable, that it almost made up for having to suffer through the John Beck era. Almost.

The Redskins had four possessions in the second quarter. All four ended with a different Redskins player celebrating in the end zone.

The party started with a 68-yard bomb to speedy wideout Aldrick Robinson. That was followed up by a 1-yard score by running back Alfred Morris. The third touchdown was a beautiful 59-yard catch-and-run by receiver Pierre Garcon that showcased the oft-injured 26-year-old’s breakaway speed. The final blow came courtesy of the “Cowboy killer” himself, veteran Santana Moss, who hauled in a 6-yard score that required pinpoint precision to catch the football while spinning and get both feet inbounds with no room for error.

As everyone headed to the locker room for halftime, Dallas was suddenly down 28-3 even though they held the Redskins scoreless in the first quarter. How was that even possible?

Griffin finished the frame with the following stats: eight completions on eight attempts for 178 yards with three touchdowns, no interceptions and a perfect passer rating of 158.3.

Those four drives accounted for 246 yards of total offense, but more importantly, they sent a message to the rest of the league that these aren’t your typical Redskins.

Griffin became the first rookie in NFL history and the first player in Redskins history to throw four touchdowns in back-to-back games. Each touchdown came courtesy of a different player. Some weeks, Griffin moves the chains with his legs. On days like this, he’s happy to stand tall in the pocket and pick defenses apart through the air.

Basically, he’s already reached a point where he’s letting the opposition pick their poison. That’s great news for ‘Skins fans. Not so much for the rest of the NFL.

3. “The Freshman” by The Verve Pipe

While he might not be as flashy as his quarterback, Alfred Morris continues to quietly put together a very respectable rookie campaign of his own.

Against Dallas, Morris carried the ball 24 times for 113 yards and a touchdown, but that’s only half of the story. The Cowboys’ defense did a good job up front — pressuring RGIII on passing plays and getting to Morris early on running plays. But the Florida Atlantic product simply lowered his shoulder and fought for every extra yard he could.

During post-game interviews, Morris sounded exhausted. More than once, he stopped mid-sentence, looked at the television cameras and assembled reporters and apologized because he was struggling to keep his train of thought after such a physical game against a defense that truly made him work for everything he got.

“I’m tired now,” he admitted. “But it’s a credit to the offensive line. They did a great job blocking and opening holes for me. Those were some tough yards out there. DeMarcus Ware caused a lot of problems for us with his penetration, and getting outside — which is our offense — wasn’t really happening. But we were able to get 100 yards on them, so big ups to us.”

Morris has now rushed for 100 yards or more four times this season. He’s gained at least 75 yards in a game nine times on the year, which ties him with Minnesota’s Adrian Peterson and Seattle’s Marshawn Lynch for tops in the NFC.

So while much of the attention is focused on RGIII, Redskins fans should also be thankful for the top 5 running back that head coach Mike Shanahan uncovered in the sixth round of the 2012 NFL Draft. Having such a dependable workhorse in the backfield to help carry the load has definitely helped take some of the burden off of Griffin’s shoulders.

For the second-straight game, the much-maligned defense was able to create turnovers and basically take away the opposition’s ground game. Not only that, but if you’re willing to only look at an incredibly small sample size, it appears the Redskins actually have a pretty impressive defensive unit these days.

Through the Eagles game and the first half against the Cowboys, Washington’s defense didn’t allow a single touchdown — which is insane to think about considering how bad this defense has been for much of the season. Amazingly, the Redskins outscored their opponents 59-9 during those six quarters of play.

Sure, they did everything they could to fall apart and give the game away in the second half, but at least there was half a game’s worth of excitement worth enjoying.

Entering the bye week, the Redskins were done. With a 3-6 record, they were dead in the water and most reasonable sports fans had to admit the lone reason to tune in for Washington’s final seven games was to watch the rookie quarterback continue to grow and develop with an eye toward the future.

Thanks to two impressive wins against NFC East opponents, the Redskins now have a very realistic chance to play for first place in the division when they host the New York Giants on Monday Night Football next week.

That’s what happens when you put up a combined 69 points in two must-win games. Suddenly, even though the Redskins are just 5-6, people are beginning to believe that — as long as Griffin is healthy — anything is possible.

If the Giants lose to Green Bay this weekend and the Redskins are able to win a third-straight win over a rival, Washington will actually be in first place in the NFC East during the month of December. Think about that for a second.