marines provide redskins fans a reason to give thanks 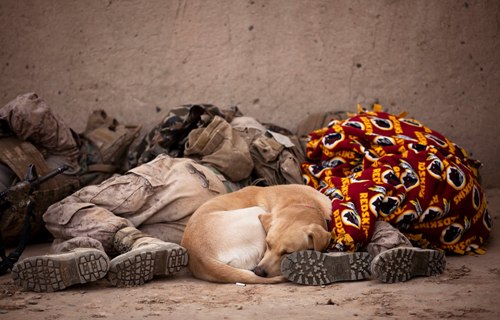 Every once in a while, you stumble across something that makes you stop and truly give thanks for everything you have in life.

This beautiful photo of two deployed Marines and their working dog catching some sleep in Afghanistan did just that for me. Via The Unknown Soldiers blog, here’s a little background information:

According to Cpl. Lodder’s caption, the dog in the photo, Blue, detects improvised explosive devices. Blue is protecting his handler, Lance Cpl. Jarrett Hatley, 21, of Millingport, North Carolina, as he takes a quick nap (covered by a Washington Redskins blanket) after helping Afghan National Army soldiers clear compounds in the central Helmand River Valley, a volatile area rife with threats from insurgents and terrorists.

The other Marine resting in the photo is Lance Cpl. Matthew Scofield, 19, of Syracuse, New York. Both Marines are assigned to 3rd Platoon, Lima Company, 3rd Battalion, 3rd Marine Regiment.

Now, I’m a veteran who happens to also be a fan of the Washington Redskins, so this image is obviously going to go over well with me. But even if I wasn’t, this photo would still have a strong impact on me because it represents just how much the brave men and women of our armed forces are willing to sacrifice to keep the rest of us safe.

So please, keep them in your thoughts and prayers as you sit down with loved ones this Thanksgiving.