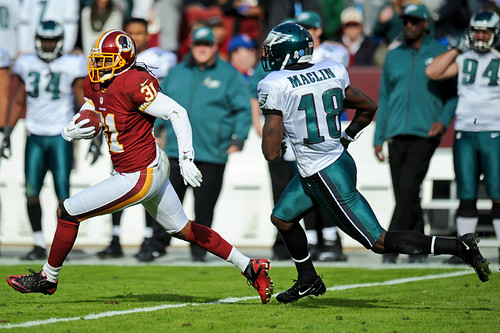 By now you’ve no doubt heard the news that Washington Redskins safety Brandon Meriweather has been lost for the year after suffering a season-ending torn ACL against the Philadelphia Eagles Sunday.

This, of course, is a blow to Washington’s defense that barely had time to get used to Meriweather in the lineup. That’s because the two-time Pro Bowler was finally making his debut for the Redskins after missing the first nine games of the season after injuring ligaments in his other knee during the preseason.

The 28-year-old was close to playing earlier this season, but knocked himself out of the lineup after a freak collision with teammate Aldrick Robinson during pre-game warm-ups in Tampa Bay.

After suffering that setback, Meriweather finally got cleared to return to action and played with a purpose against the Eagles — racking up seven tackles, two passes defended and an interception in one half of action.

“It felt great. It felt great to be back out there with the guys,” he said. “You know, you went through the rain and the pain with them. The knee felt good. It felt real good. I was able to run out there and cut, and just to be in a competitive environment was actually better for it than anything.”

And then his knee buckled in the early stages of the third quarter and, just like that, he was once again sidelined.

“He played great,” Shanahan said. “You can’t ask a guy to play any better than he played. Thirty-seven plays, the tackles, pass breakups, the interception; he’s just a football player. Unfortunately, it’s the first time he’s ever been hurt. He’s never been hurt in the past. He’s has a couple shoulder sprains here and there, but every once and a while these things do happen. It was the right knee. He has never had any problem with the right knee before.”

If you’re keeping score at home, the Redskins got to enjoy their preferred secondary for exactly two quarters of football in 2012.*

*And that’s not counting safety Tanard Jackson, who was suspended indefinitely for violating the NFL’s substance abuse policy.

As most of you know, I’m taking photos on the sidelines during Redskins games. Well, shortly after he came out of the game, Meriweather could be seen testing his right knee as he sprinted up and down the sideline.

Honestly, I thought the only reason he didn’t return to action was because the game was already in hand and the coaching staff felt it was better to be overly cautious and save him for future games rather than risk losing him in a game that was all but decided against the pitiful Eagles.

Even though his time in the lineup was brief, his teammates truly believed he was one of the main reasons the Redskins defense finally put together a respectable outing in 2012.

“It was a huge boost to get him back,” defensive end Stephen Bowen said. “Just having him out there gave us a lot of confidence and it seemed like everyone just played with a little more excitement.”

In fact, anywhere I went in the post-game locker room, it was apparent Meriweather’s teammates were thrilled to have him back in action.

“He got injured again, which is unfortunate, but for the two quarters he was out there he definitely gave us a lot of energy,” said middle linebacker Perry Riley. “I mean, he played great. He had a pick and a couple big tackles. He played great for us.”

Even head coach Mike Shanahan agreed the defense as a whole stepped up its game because of Meriweather’s presence.

“I think any time you have a guy looking forward to playing, and he’s played at a high level, it’s great to have those guys out there,” Shanahan said. “They add an air of confidence to your football team and more importantly, they make plays.”

For as bad as the Redskins secondary has been at times this season, it really was nice to see them finally make some plays. And it’s safe to say ‘Skins fans were eager to see if the dominating perform had more to do with Washington’s ideal secondary or if it was simply a product of a terrible Eagles’ offense that featured the worst offensive line in football and a rookie quarterback making his NFL debut.

“When those guys are healthy and they’re playing together, they’re as good as any secondary in the league if you ask me,” Riley said. “If we can get him back healthy, I think we can do good things the rest of the season.”

So much for that.

“He made some plays, as you could see,” said Shanahan. “He made some nice tackles, pass breakups and he adds a lot to our football team. Now we’ll have some guys step up and play well in his spot. I thought D.J. [Gomes] came in and did a good job. After Brandon went down, he came in and had a nice hit in there. I’m expecting these guys to step up and take his spot.”

Anyone who heard Meriweather’s post-game comments or saw how he was acting in the locker room had to believe the injury wasn’t serious. After all, he was cracking jokes and going out of his way to downplay the situation.

“I didn’t hurt nothing, man,” Meriweather said. “I’m going to be back out there the next time you see me.”

Unless that was his way of saying he’s going to vanish until the 2013 season, I guess it’s safe to say that’s not the case.