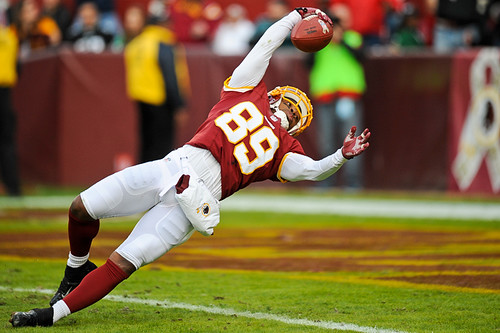 As the Washington Redskins prepared to take on the Philadelphia Eagles Sunday, there was plenty of reason to believe the season was already lost.

That because the Redskins stood at just 3-6 after pissing away victories against several beatable opponents during the first half of the 2012 season.

Well, that and the fact that they were an NFL-worst 5-15 at FedEx Field since 2010. And they’d somehow managed to lose a mind-boggling eight-straight games against rookie quarterbacks. Oh, and they were coming off a demoralizing defeat by a pitiful Carolina Panthers team that made even head coach Mike Shanahan have to change his stance about this season.

Thankfully, none of that mattered as the Redskins put together their most complete game of the season — crushing the Eagles from start to finish to cruise to an easy 31-6 victory.

For the first time in nearly a month, the offense didn’t have to settle for field goals. For the first time this season, the defense actually bothered to show up. And, in a welcome change, it was Washington that set the tone early by making a few big plays which then forced Philly to play from behind the rest of the day.

Anyone who has watched quarterback Robert Griffin III play a single college or pro game knows he’s the real deal.

That’s because the Heisman Trophy winner is a gifted passer with amazing athleticism who has already managed to exceed the ridiculously high expectations placed upon him because of just how much the Redskins were willing to trade away to land him.

But if ‘Skins fans have learned anything over the first nine games of the RGIII era, it’s that he can’t do it all by himself. While he’s a damn fine player, he’s still going to need help from his teammates if the Redskins are going to finally turn the corner towards respectability.

Mercifully, Griffin finally got some much-needed help, and surprisingly, it wasn’t from Pierre Garcon. Sure, the oft-injured receiver returned to the lineup for the first time since Week 5, but his impact was minimal (three catches for five yards).

Instead, it was seemingly ever other pass catcher on the roster who rose to the occasion against Philadelphia.

Thanks to great field position, the offense needed just two plays to find the endzone. Fullback Darrel Young caught a six-yard touchdown pass from Griffin less than two minutes into the game and the Redskins never looked back.

Washington’s first drive of the second quarter ended in spectacular fashion when receiver Aldrick Robinson caught a 49-yard touchdown. That type of game-changing touchdown hadn’t been seen since Week 1 and 2, but it was just to start on this day.

Next thing you know, veteran wide out Santana Moss made the play of the game — beating two Philadelphia defenders to the ball and then fighting through their attempts to tackle him for a hard-fought 61-yard score.

“Honestly, it was just time to make a play,” Moss said. “They called my number and a play was made. It kind of happened so quick I didn’t even realize the situation and what was going on around me. I just saw an opportunity and being that those opportunities don’t come as often as they used to, I try and make sure I capitalize off every one that comes my way.”

Griffin’s fourth and final touchdown pass of the day went to tight end Logan Paulsen, who dragged a defender the final seven yards of his 17-yard touchdown reception.

With so many people stepping up their games, it’s no wonder Griffin finished the day with such superb stats: completing 14 of 15 passes for 200 yards with four touchdowns, no interceptions and a perfect 158.3 quarterback rating. His 84 rushing yards were simply icing on the cake.

3. “When A Blind Man Cries” by Metallica

With apologies to the offense, which played its best game in a long, long time, the story of the game was the inspired play of the defense.

Defensive coordinator Jim Haslett and friends have been been the weak link all season long, as the Redskins’ secondary making even the most mediocre of quarterbacks appear to be Pro Bowlers. For one week though, the defense finally found a quarterback they could handle.

That was great news for the burgundy and gold. Not so much for rookie Nick Foles.

Sensing blood in the water, Washington’s defense was especially aggressive — sending extra blitzers early and often in hopes of rattling the first-time starter and it clearly worked.

The Redskins created three turnovers and added four sacks on the day while holding their opponent to just 257 yards on the day. Oh, and they held an opponent without a touchdown for the first time since Week 3 of the 2011 season.

All in all, it was the first dominant performance as we’ve seen from this unit this season, and it came at the perfect time.

“You have to play your best football in the second half of the season and, obviously, our backs were against the wall,” Shanahan said. “We had to come out with a win and play our best football – offense, defense and special teams. No game is perfect. We will learn from our mistakes, but I like where we’re at.”

Okay, I’ll admit I was more than a little bit skeptical when the Redskins signed safety Brandon Meriweather. To me, he just seemed like a poor man’s LaRon Landry because he’s solid against the run, suspect in coverage, but doesn’t possess the same upside as the former first rounder did when healthy.

Speaking of being healthy, that’s something Meriweather has lacked since coming to Washington. His only impact prior to the Eagles game was a literal one — when he collided with teammate Aldrick Robinson during pre-game warm-ups and caused both to miss the game against Tampa Bay back in September.

So forgive me for not exactly believing his debut would completely energize Washington’s defense.

For one week, at least, I’m happy to report I was wrong. Meriweather’s presence in the lineup energized his teammates and the safety was a force as he racked up seven tackles in about half a game’s worth of action. He also joined cornerback DeAngelo Hall and outside linebacker Ryan Kerrigan by collecting an interception in his Redskins debut.

If this is a sign of things to come, then the two-time Pro Bowler really could end up turning his career around in Washington.

So it sure did feel good to watch the Redskins do their part to bring Reid’s time in Philadelphia to an end.

These two teams will face off one more time during Reid’s farewell tour, and here’s hoping the Redskins monkey stomp the Eagles one more time.

Don’t do it for me. Do it for the Donovan McNabb trade.