logan paulsen blazes his own trail to NFL starter 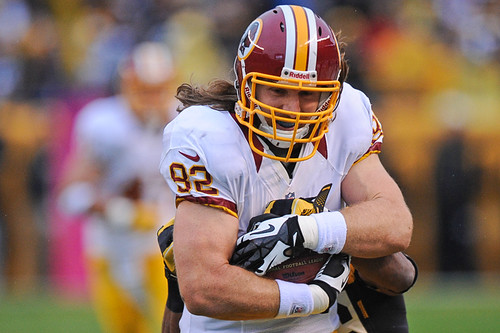 When Redskins tight end Fred Davis injured his Achilles tendon during the first quarter of Washington’s game against the New York Giants in Week Seven, it was a situation backup tight end Logan Paulsen was unfortunately all too familiar with.

Paulsen, who became the team’s starter after Davis was sidelined, knows exactly what it’s like to face a devastating injury that prematurely ends a season.

For Paulsen, it was the first game of his senior season at UCLA, when he broke his foot during the season opener against Tennessee. That experience, showed Paulsen just how tough a season-ending injury is both physically and emotionally.

“It’s very difficult,” Paulsen said. “The fact that your team is still going on without you when you were such a big part of it for such a long time – I was at UCLA four years, Fred’s been here for three years. It just seems like there’s a seamless transition without you there.

“I think that’s the hardest thing psychologically is you kind of lose yourself a little bit. You don’t really have a direction for a little bit of time.”

During his rehabilitation, Paulsen focused on recovering from the injury while also being mentally ready if and when his team needed him again. That same mindset and preparedness also helped the 25-year-old this season when it came time to step in for the injured Davis.

“Obviously, it’s extremely difficult when one of your friends or teammates gets hurt,” said Paulsen. “I’ve had some experience with that and I know how difficult it can be. For him, I feel really bad, but at the same time, I’m on the Redskins for this moment, for this situation. However dark it is, this is my opportunity and this is why I have a job. So I need to make sure I’m prepared to do my job to the best of my ability and be a pro. I think I’ve done that.”

Paulsen’s path to becoming the starting tight end for the Redskins has been an unlikely one. Growing up in Northridge, Calif., Paulsen was always interested in sports, but it was actually soccer, not football, that he devoted most of his time to as an adolescent.

Paulsen admits he didn’t really follow professional football until he got to middle school and began playing some flag football. Then, when he got to high school, football became a much larger part of his life. And eventually, he had to make a choice between the two sports, since he didn’t have time to play high school football and still be a part of his club soccer team.

“Inevitably, one of those things had to give. I guess, fortunately, it was the soccer,” said Paulsen.

Even as football became a larger part of his life, he still didn’t realize it would become his life – until recruiters showed interest in him.

“Honestly, I didn’t think anything was going to become of the football thing. Then, lo and behold, my junior year rolled around and I had a couple of scholarship offers. It just kind of all happened really seamlessly,” Paulsen admitted.