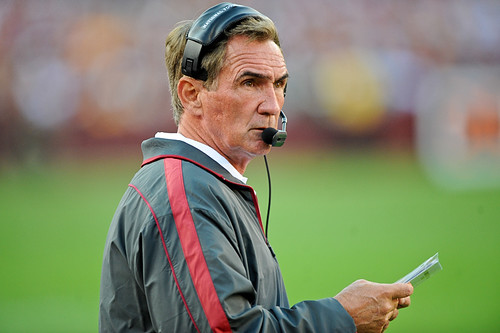 As most sports fans know by now, Mike Shanahan did not begin his coaching career with the Washington Redskins.

Of course, Shanahan won two Super Bowls with John Elway and the Broncos during his 18 seasons in Denver. But people often forget it was with the Los Angeles Raiders that Shanahan first became an NFL head coach.

The reason many sports fans either don’t know or don’t remember Shanahan’s time with the Raiders is because he lasted just 20 games under Al Davis. Well, clearly there was no love lost between Shanahan and Davis, as evident by this amusing story which is part of a promising book titled Coaching Confidential: Inside the Fraternity of NFL Coaches by Gary Myers.

Via Peter King’s weekly MMQB column, Shanahan admitted in Myers book to having Hall of Famer Steve Young throw a football at Davis during pregame warmups while he was the offensive coordinator in San Francisco. Apparently Davis was over on the 49ers’ sideline and this didn’t sit well with Shanahan and some of his players.

Here’s what happened next:

“Guys, we’ll win the game, don’t worry about it. Don’t let him bother you,” Shanahan said.

The end of the 49ers’ pregame drill took them back to their own 5-yard line. Davis was standing 35 yards away. “Hey, get him out of there,” the players said to Shanahan. Shanahan was pissed at Davis for disrupting his pregame routine. And surely he was still pissed at him for not paying him the $250,000. “Now I started thinking. Okay, so we got one more play left,” Shanahan said.

Shanahan is telling this story seated behind his desk at Redskins Park. It’s a quiet spring day, but suddenly he’s animated. On the sideline, Shanahan’s face gets red, and it looks like the veins are about to pop out of his neck when he gets mad. Off the field, you rarely see his emotional side. But he had no use for Davis. Davis had embarrassed him by firing him almost without giving him a chance, and during that pregame Shanahan wanted to put a scare into his nemesis. Shanahan came up with the idea of how to send Davis back to his side of the field and needed one of his quarterbacks to be his accomplice. Young said he was more than happy to oblige.

“Throw a go route,” Shanahan told Young. “If you happen to hit that guy in the white outfit with the ball, you won’t make me mad.” The receiver was Jerry Rice. He ran the go route. Shanahan didn’t really want to drill Davis. But if it happened, maybe he would never stand on the 49ers’ side of the field again. Of course, if he hit Davis, Shanahan would never get his $250,000. Young dropped back to pass. He threw the ball in Davis’ direction. Rice, whom Shanahan did not bring into the loop on this little bit of mischief, was running downfield, looking up for the ball. He was not looking at Davis. He didn’t see Davis. Shanahan saw the ball. He saw the receiver. He saw Davis. All three were about to occupy the same spot. Shanahan thought Davis saw the ball coming. He did not.

“Oh, my God,” Shanahan said. “I wanted to scare him. I didn’t want to kill him.” The ball and the receiver were closing in on Davis. “Al realizes that the ball and everybody is coming at him about five yards before there is going to be contact,” Shanahan said. “I think he’s going to be run over. And he dives; he actually dives out of the way. Well, half of our players see what happens, and they are all laughing.” Young drilled Davis in the leg.

It was not surprising that he found his target. Young completed 64.3 percent of his passes in his career. “Ten years after this happened, I was walking out of a stadium on a Monday night, and Al came up to me,” Young said. “He told me that he knew it was me.” Young told Davis that he was ashamed of himself, more so than with anything else he had ever done. He then sent him a letter of apology.

Shanahan is so fired up that he gets out of his seat to finish the story. He loves this story. It was revenge. He explains in great detail Davis diving on the grass at Candlestick Park, getting to his feet, his hair falling down in front of his face. Davis stared him down from 35 yards away and gave him the middle finger.

*Which seems relevant after last week’s heated exchange between Shanahan and the D.C. media. Clearly this means it’s only a matter of time before Shanahan directs one of his quarterbacks to throw a football at Mike Wise or David Elfin.

If the rest of the book is anything like this Shanahan story, I’m going to be picking it up in the very near future. For those who are interested in purchasing the book, here’s a link.