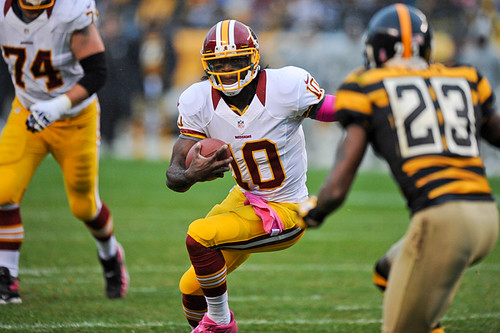 Even though the Washington Redskins had the weekend off, it was still a stressful Sunday for ‘Skins fans.

While Redskins fans have no love lost for any of those three franchises, the fact is quarterback Robert Griffin III has already missed time this season because of a concussion. And although the playoffs are certainly a long shot for Washington, the franchise’s long-term success hinges on a healthy RGIII.

For as ugly as things have been this season, at least the Redskins know they have a legitimate playmaker at the game’s most vital position.

Although he’s only played in nine NFL games, Griffin has shown enough during his limited time in the burgundy and gold to make some of the greatest names in franchise history gush over him. So much so that three receivers — Art Monk, Gary Clark and Ricky Sanders, affectionately known as “The Posse” — can’t help but think of what it would be like to play alongside the 22-year-old phenom.

“From my standpoint, we were very fortunate with the quarterbacks we had,” Clark said. “But I tell you what … you can’t say enough about this young man. I had the chance to meet his dad the other night and it’s clear he comes from a quality family. I can see where he gets it all from. His father is a great man and RGIII’s numbers on the field speak for themselves.

“He’s like the LeBron James of the NFL,” Clark continued. “He came in at such a young age, he’s so composed, he knows exactly what to say and what not to say. To me, he’s the perfect player.”

Because LeBron James is such a polarizing player off the court who revolutionized the game on it, I asked Clark to further explain exactly what he meant.

Was this Clark’s way of warning the nation’s capital that it’s only a matter of time before RGIII rips our collective heart out and “takes his talents to South Beach” or was he actually saying it as a compliment?

“What I really mean is he’s already beyond his years,” said Clark. “A lot of young guys and you put a camera in front of them or a microphone in front of them, what comes out of their mouth is not necessarily what the coaches or the team wants them to say. But they’re young and just don’t know any better. He’s not that what whatsoever. You’re not going to trick him into saying something he doesn’t want to say. He’s never going to say anything to diminish his teammates. Even if he thinks it, he’s not going to say anything about it. He’s always going to stand up there and say,  ‘It’s my fault. This is my team and I need to do better. We win together and we lose together.’ I admire that about him.”

Okay, with that cleared up, it was time to let some of the other receivers in on the action.

“During our time, we didn’t have mobile quarterbacks,” Monk said. “But we were so diverse in our offense that we were able to make big plays and make things happen. But in this situation, when you have a quarterback who can stand there and deliver a perfect pass in the pocket, while also being such a threat running the ball, it can really open things up for your offense.”

Which is why, if Sanders had his way, the Redskins would sign him to a new contract today.

“Just to reiterate what Gary was saying, we had some great quarterbacks in Doug Williams, Jay Schroeder and Mark Rypien,” said Sanders. “But this young man, all I can say in ‘Wow.’ I’d like to go put a uniform on today and I’m 50-something years old. There’s just not enough I can say about him. He’s already a great player. Give him another year or two and I wouldn’t be surprised if he’s playing in the Super Bowl.”

Call me a cynic, but at this point, I’d be happy if the team finished a season with a winning record. That being said, it’s understandable why the last group of players to win anything noteworthy for this franchise are so high on Griffin.

“What I like about him is he’s able to have three or four different throws as a quarterback,” Clark said. “He recognizes his personnel — who catches the ball really well, who catch the ball good and who has trouble catching the ball. With each one of those different types of receiver, he throws a different ball. If I’m a person whose hands are a little bit suspect,* he throws a ball that’s easier to catch as opposed to someone who has great hands. With them he can put it in there at 100 miles per hour and know they’re gonna catch it. To be able to recognize all of that and still see everything else out on the field, it’s very, very impressive.”

Did you guys honestly believe Griffin was going to be this good this quickly though?

“The great ones do,” Clark said. “That’s why they’re great, because they always rise to the top. A typical rookie won’t, but the great players — which he’s already showing he is — this is what’s expected of them. Quite honestly, it’s expected of RGIII.”

With all three members of “The Posse” saying so many good things about Griffin, I thought it was only fair to give Rypien a chance to join the conversation. After all, he’s already got the hardware RGIII is hoping to one day earn.

Be honest, when you watch Griffin play, it’s pretty much like seeing yourself in a mirror, right? Same game, just a different jersey number, right?

“Oh god no,” he said with a laugh. “Not unless I’m dreaming. This kid’s got more talent in one pinkie than a lot of us do in our whole bodies. Plus he’s humble and very grounded. All of the accolades he got in college were well deserved and he’s starting to portray some of those same qualities here in his pro career. He’s fun to watch and I think once they figure this whole thing out and guys start catching the football for him, I think he’s got a pretty good opportunity to be really good. And I think they’ve got an opportunity to be pretty good too.”