when it comes to halloween, alfred morris is super 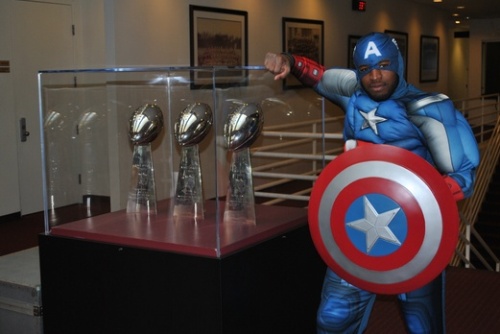 I have yet to meet a single person who has anything negative to say about Washington Redskins running back Alfred Morris.

Maybe it’s because he’s made it know he grew up rooting for the burgundy and gold. Maybe it’s because, through hard work and determination, he was able to go from unheralded sixth round pick to one of the most productive backs in football seemingly overnight. Or maybe it’s because he’s willing to do things like let fans vote on what ridiculous Halloween costume he’d wear for a Pediatric Halloween Party at Georgetown University Hospital.

Either way, it’s clear that the 23-year-old is quickly becoming a fan favorite in our nation’s capital.

‘Skins fans were given four choices — Popeye, Angry Bird, Batman and Captain America — and, as you can see from the highly-entertaining photo at the top of this post, Captain America emerged victorious. Even though Morris told me his vote probably would have gone towards Batman, it appears he had no trouble embracing this slightly different superhero role.

Here’s hoping the Redskins use the bye week to remember just how productive Morris has been thus far, so he’s able to do more than protect the old Lombardi Trophies during the second half of the season.

[Editor’s note: The photo is borrowed with love from the team’s official Pinterest page, whatever that is.]