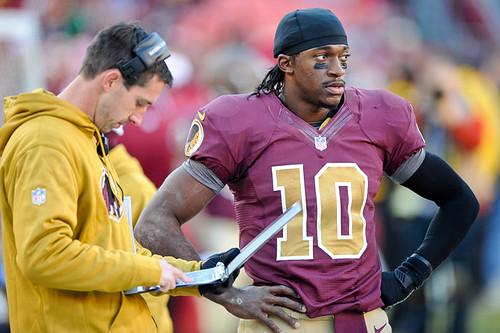 In the days leading up to the game against the Carolina Panthers, countless members of the Washington Redskins — including head coach Mike Shanahan — were emphatic about the heightened importance of this match-up.

Not only was this Washington’s last game before the bye week, but it was, on the surface, the easiest game on the 2012 schedule. If the Redskins couldn’t muster a win over a 1-6 Carolina team that had lost five straight games and struggled to do anything well, then what does that say about them?

Well, as long-time fans know by now, nothing is easy with this franchise.

The Redskins are simply unwilling or unable to take the easy route, so naturally they were defeated by a doormat in a “must-win” game. Thanks to this disheartening 21-13 loss, all of the joy that surrounded this team just two months ago when Robert Griffin III stepped onto the field for the first time as a pro, is dead and gone.

Even Shanahan is willing to conceit that losing this game changes everything for the rest of the season.

“Obviously we’re not out of it statistically,” he said. “Must-win games give you a chance to play for a playoff spot when you’re 3-5. And it’s got to be a must win to get in the hunt.

“Now you’re playing to see who is going to be on your football team for years to come,” Shanahan continued. “And now we get a chance to evaluate players and see where we’re at.”

Against Pittsburgh, Griffin and friends struggled to generate much in the way of offense. Because the Redskins got behind so quickly, they had to get away from their bread and butter — one of the best ground attacks in football — and the offense stalled because receivers couldn’t catch the damn ball.

Well, for a second-straight week, the Redskins offense looked out of sync and struggled to put points on the board. The difference though, was this time around they were able to move up and down the field, the offense just came unraveled in the red zone.

Consider this: Washington’s first two possessions of the day were a 12-play, 68-yard drive and a 16-play, 78-yard drive that ate up a total of 16 minutes and 56 seconds of clock. And yet, the Redskins trailed the Panthers 14-3 at the half.

Of course, part of the problem is this team seems to outsmart itself on a weekly basis. Why anyone would think it’s a good idea to put the ball in the tiny hands of a receiver like Brandon Banks on 3rd down in the red zone is beyond me. The guy is 150 lbs. soaking wet, so it’s not like he’s going to break a tackle.

Speaking of outsmarting yourself, can someone explain to me what happened to Alfred Morris? The guy is among the league leaders in rushing this season, and yet, he had just three carries the entire second half — none of which came in the fourth quarter. It’s worth nothing that those three carries picked up 22 yards, so I ask again — where was Morris?

Was he hurt? Did the coaching staff simply turn to Evan Royster (who has been completely average all season long) because they wanted to abandon the run and they think he’s better in pass protection?

These are topics that Shanahan should probably spend some time evaluation as well.

Over the last two games, Washington’s defense has been remarkably consistent.

Aside from an 82-yard catch and run by someone allegedly named Armanti Edwards, they’ve done a better job of eliminating big plays by opposing offenses. Of course, they still struggle to get off the field, can’t generate any pressure on opposing quarterbacks and no longer create turnovers, so keeping teams from picking up 40 or 50 yards in a single play is a pretty hallow victory.

Washington has lost three-consecutive games and in each of those contests, it’s clear that teams are content to pick apart the Redskins’ awful defense through the air. They can either target one of the softest  secondaries in the NFL or — and this is the most troubling development of 2012 — just throw to whoever middle linebacker London Fletcher is attempting to cover.

Whether we’re talking about Eli Manning, Ben Roethlisberger and Cam Newton, all of them simply dropped back, looked for the players Fletcher was assigned to cover and then loft it over his head for an easy gain.

I know he’s older and in less than 100 percent, but there’s no way around it — London Fletcher has become a liability in the middle of this defense.

At the beginning of the season, the offense looked unstoppable — scoring 30 points a game against whatever team was foolish enough to show up that weekend. Now though, the team looks completely lost whenever it has the ball, which explains why they’ve scored just 25 points over the last two games combined.

On defense, the team no longer gets sacks or turnovers and on special teams, they screw up even the most routine of events, like extra points.

Oh, and here’s a fun fact: the Redskins lead the league in penalties. Simply put, this team has regressed in every single area of the game.

“Everybody’s disappointed in what happened today,” Shanahan said. “You’re looking for guys to step up offensively, defensively and on special teams. Obviously, I’ve got to do a better job because we didn’t do that today.

“I take full responsibility for that.”

5. “The President” by Snow Patrol

This loss marks the sixth-straight time the Redskins have lost their final home game before a presidential election.

Dating back to ’92, Washington’s football team has failed to emerged victorious, which makes sense on some level since the franchise is in a constant state of disarray, so why wouldn’t that carry over during “Redskins Rule” games?

So while history suggests Barack Obama might want to begin packing up his belongings and planning the next phase of his life, I can’t help but think another (more stable) franchise should volunteer to step up and take over the election game responsibilities.

So even if this franchise never gets it’s act together, the country still might have a chance of a brighter future.