clinton portis: ‘I used to play with him on tecmo bowl’ 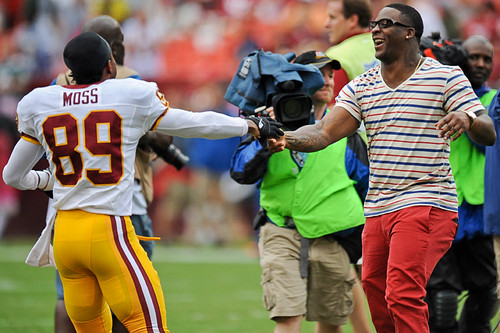 There will never be another player quite like Washington Redskins running back Clinton Portis.

On the field, he was a model teammate who will be remembered, not only as one of the most productive running backs in franchise history, but also as one of the best pass blocking backs in the history of the game.

Off the field, he was a lightning rod for criticism, thanks to questionable practice habits, a fierce radio feud with a former player and a buddy-buddy relationship with the owner.

But whether you loved him or hated him, you had to respect Portis for, at times, throwing the entire team on his back and willing the Redskins to victory. When Hall of Famer Joe Gibbs came back to town, he said he needed a workhorse to center his offense around.

For seven seasons, he was Washington’s offense. When he was on his game, the Redskins usually won. If he had an off game, so too did the burgundy and gold.

Now, with his playing days over, the 31-year-old looks back fondly on his time in Washington. Even though he was already honored earlier this year when he officially retired, Portis said he was more than happy to come back to town to participate in the team’s homecoming weekend.

I had the chance to chat with Portis on the sidelines before the Redskins hosted the Carolina Panthers and, as always, enjoyed listening to one of the quirkiest athletes I’ve ever been around. Here’s what we had to say:

Okay, you officially hung up your cleats back in August. How’s retirement treating you?

“You know, retirement is actually great,” he said. “I feel like I’m busier now than I was when I had a set schedule from playing football. I’m always on the go and there really aren’t any set guidelines, so you’ve got to get structure in life. That’s what I’m working on. It’s like, every morning you’ve got an opportunity to go somewhere. They want you in Chicago or you can be in L.A. or there’s something going on in Atlanta, so you’ve got to balance it out and still find family time, still find me time and then get business handled.”

Fortunately for everyone involved, you were able to free up your schedule to be part of this weekend’s festivities. What does it mean to you to be considered one of the best to ever play for the Redskins?

“It’s great just to have this opportunity,” he said. “To think, not too long ago I was playing. Now, I can look back and say I’m an alumni. You see all of these guys who created the tradition and helped make the Redskins organization as special as it is. To be out here with those guys, and for them to come up to me and tell me they appreciate my work means a lot to me.

“I had a conversation with Mark Rypien Saturday night and I’m thinking, ‘Wow, I used to watch this man when I was growing up and used to play with him on Tecmo Bowl,” Portis continued. “Just to have this opportunity is great. I really feel like I’m not supposed to be here.”

I’m sure you felt one way while you were still playing, but I’m wondering — does an event like this give you a different perspective on the Washington Redskins organization?

“It does. I honestly didn’t even know all of these people played here for the Redskins,” he said. “Just to meet some of these guys and to have the opportunity to be a part of this weekend with them is exciting.”

Obviously, you had a very productive career in Washington. What are some of your favorite memories during your time with this franchise?

“There are so many memories, there’s not really one that I can pinpoint,” Portis said. “When I think about it, I think of throwing blocks down the field or the Jacksonville game.* I think of making plays as a team. Looking back, when someone brings up a play and you can remember exactly how that play went — like the 38-yard run against the Cowboys to beat them — there’s a lot of situations to think of and reflect on.”

*This game — a thrilling 36-30 overtime win over the Jacksonville Jaguars in ’06 — is my favorite Redskins game no one talks about and was easily one of the most exciting games I’ve had the opportunity to cover.

The highlight of the weekend for many ‘Skins fans was seeing the more than 150 former players who attended the game. What’s been your favorite part of this weekend?

“To be standing there for a picture next to Art Monk and Darrell Green,” Portis said. “I’m just standing there thinking the whole time, ‘Are you kidding me?’ When you think of the Redskins organization, to me, those were the guys who were legendary. Now I’m standing in a picture and they’re putting their hands around me. That’s when I was like, ‘Well, I guess I fit in.'”

Not only are you being honored as one of the 80 Greatest Redskins in franchise history, but the organization is also recognizing Sean Taylor as well. Does that make this moment even more special for you, considering how close the two of you were?

“That’s probably the best part of all of this — having the opportunity to go in with Sean, who was so legendary to me and was someone that I always keep involved in my life,” Portis said. “He was someone who helped me out tremendously, so to have his father here and to see his family here is special. I was the biggest supporter of the Redskins getting Sean and bringing Sean into this organization. For them to actually listen to my word and for him to be honored today as well, it all means a lot.”