alfred morris: panthers game is a ‘must win’ 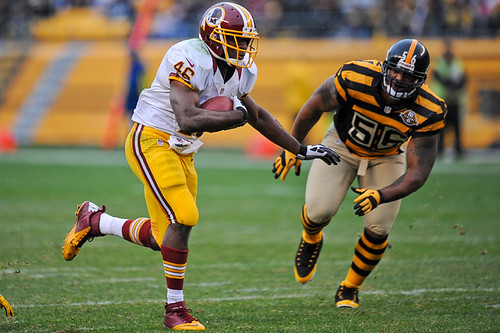 For seven weeks, the Washington Redskins knew exactly who and what they were — especially on the offensive side of the ball.

Boasting the league’s best ground game (averaging 177 yards per contest), the Redskins happily marched up and down the field thanks to quarterback Robert Griffin III and running back Alfred Morris.

The team had a clear identity and even though opposing defenses knew what was coming, they seemed unable to stop it.

Until Washington traveled to Pittsburgh to face the Steelers.

Because the Redskins came out flat in all three phases of the game, the Steelers jumped out to an early lead, forcing RGIII and friends to get away from the rushing attack.

With the defense still unable to stop anyone and receivers seemingly uninterested in catching the football when it was thrown their way, the game got out of hand in a hurry. At that point, the ground game was an afterthought and the Redskins became one-dimensional.

In related news, Pittsburgh cruised to an easy 27-12 victory.

“Once you get down by a couple scores, it’s kind of hard to do what we do — and that’s run the ball,” said Trent Williams. “Pittsburgh played a great game, you can’t take that away from them. They made the plays and we didn’t.”

And yet, even after complimenting the Steelers, Williams still couldn’t help but feel this loss had more to do with what his squad didn’t do, rather than what the opponent did do.

“We definitely did what was necessary to beat ourselves,” he said. “Pittsburgh just capitalized off of our mistakes. You come in to Heinz Field and you want to win, you probably have to play at your highest level. We didn’t do that. Flat out.”

Because the Redskins’ rushing attack has been such a consistent weapon this season, it was disheartening to see Morris become a bystander — rushing just 13 times for 59 yards. Given the choice between seeing him drag defenders or watching Santana Moss drop yet another pass, I think it’s safe to say most ‘Skins fans would have rather seen the rookie running back more involved.

“I don’t even know if we gave this one away,” Morris said. “We just couldn’t get going and they just beat us. They just flat out beat us. We’ve just got to suck it up and take it like a man. We’ll watch film and learn from it. We’ll grow from it and hopefully get better next week.”

How did this game get out of hand so quickly? Did Pittsburgh do something special to disrupt the team’s well-oiled offense or, like Williams said, was this a case of the Redskins being their own worst enemy?

“It definitely felt like everybody had an off day at the same time,” said Morris. “We’ve got something special here, and offensively we went out there and showed the exact opposite. It’s a long season and we’ve got lots of work to do. We’ve just got to learn from this and grow from this. We just can’t let it happen again.”

Knowing that, how tough was it for him to watch the game get out of hand while being unable to help?

“It was, but at the same time, I don’t really care if I’m running the ball,” he said. “I was able to get a lot of pass blocking in, which is something I definitely wanted to work on. Taking a positive out of this game, I was able to work on pass blocking and route running. My biggest thing is just winning and we didn’t do that, so that’s why I’m not in a good mood. We didn’t win. We just let them beat us.”

What’s the mindset when a team has such a poor performance in all three phases of the game? Do you spend extra time breaking down film to see what went wrong or do you just chalk it up to a bad outing and move on as quickly as possible?

“You can’t dwell on it. I mean, it’s easier said than done, but you’ve got to move on,” Morris said. “There’s an opportunity for growth and you’ve got to take it and, like I said, get better.”

After this disappointing loss, the Redskins now sit at 3-5 at the midpoint of the 2012 season. With four of the next five games at home, the time is now if this year’s squad is going to make any sort of run.

Considering the 1-6 Panthers are one of only two teams in the NFC with a worse record than Washington, it’s easy to see where Morris is coming from. If this team loses to a doormat like Carolina, it’s officially time to say the season is over.

If they are able to defeat Cam Newton and friends though, they’ll have two weeks to prepare for a mediocre Philadelphia Eagles team counting down the days until they can fire Andy Reid and replace Mike Vick. But let’s not get ahead of ourselves here.