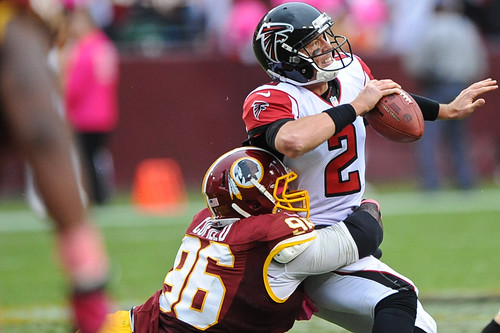 In his second NFL season, defensive lineman Barry Cofield experienced the moment every player dreams of – he won a Super Bowl. His team, against the odds, was able to fight their way through the playoffs and win on the biggest stage of all. It was an amazing experience for him.

Once he was acquired by head coach Mike Shanahan last year though, Cofield immediately began dreaming of what it would be like to win it all for a championship-hungry city like Washington.

“I can only imagine with how starved the fans are around here, the type of reception we’d get if we were able to pull it off here,” Cofield said. “It would be magical.”

Growing up in Cleveland Heights, Ohio as a fan of the Cleveland Browns, Cavaliers and Indians, Cofield understands what it’s like to agonize over a franchise’s losses and to desperately want your team to win. In fact, he relishes those fan expectations.

Cofield has always been athletically gifted, if perhaps a little too gifted for his age. Being bigger than most other kids, he couldn’t begin his football career until sixth grade because he exceeded the maximum weight limit imposed on kids in the local rec football league.

By high school, he lettered in four sports in high school – football, baseball, basketball and track and field.

Cofield bounced around various positions in his youth. He played everything from tight end to linebacker to running back and fullback. It wasn’t until his senior year in high school that his coach moved him from outside linebacker to the defensive line.

He had a number of prestigious football programs recruiting him his senior year, but for Cofield it was about more than the experience on the gridiron.

“Grades were always a big deal in my family too, which is how I ended up picking Northwestern,” Cofield said.

Northwestern head coach Randy Walker was also from Ohio, which helped in the recruiting process. It was that Ohio connection and what the school could offer academically that ultimately sold Cofield on the school.

“It was the combination of Big 10 football with an Ivy League-type degree. I just felt like that was an opportunity that I couldn’t pass up,” said Cofield.

At Northwestern, Cofield pursued a communications degree with a sociology concentration. He wasn’t sure exactly what he wanted to do for a living, but knew he didn’t want to work in a cubicle. He was particularly interested in working with children.

It wasn’t until his junior year of college that he actually believed he had a shot of making it to the NFL.

“Luis Castillo was a year older than me, and he was my roommate on road trips,” Cofield explained. “Just hearing him go through it and end up getting drafted the year before my senior year; it wasn’t until then I thought, ‘I play next to this guy. He’s good enough to go in the first round.’

“So I felt like I’m good enough to at least play.”

Cofield remembers his NFL pre-draft experience as “nerve wracking.” The NFL Scouting Combine was particularly frustrating, as he watched players’ stock rise and fall on a daily basis.

The defensive lineman was realistic about his prospects in the draft. Cofield thought he might go as high as the third round, but believed it was just as likely that he wouldn’t get drafted at all.

He didn’t plan a big, flashy party to celebrate. Instead, he watched the draft quietly at home with his family—at least part of the draft.

When he was finally selected in the fourth round of the 2006 NFL Draft, Cofield wasn’t actually following the proceedings on television.

“I was watching the movie Saving Silverman at the time they called my name,” he said.

Forgoing a flashy draft day celebration for a simple gathering at home befits Cofield’s blue-collar work ethic. A down-to-earth guy who embraces hard work, his determination has gotten him pretty far in his football career.

“It wasn’t my birthright. It’s something I had to work for every single day.”

His talent and work ethic attracted the attention of the Redskins’ front office last offseason, who targeted Cofield as a 3-4 nose tackle, despite having never played there in the pros.