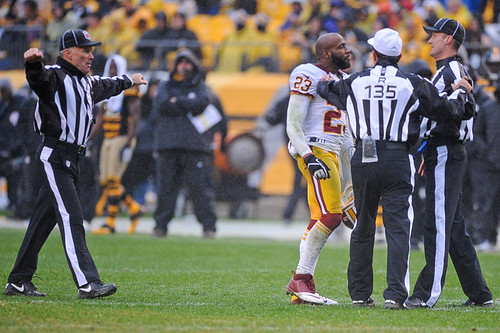 1. “Tell Me Where It Hurts” by Halestorm

Coming into Week 8, the Washington Redskins had not beaten the Pittsburgh Steelers since 1991. To put that in perspective, current franchise quarterback Robert Griffin III hadn’t even had his second birthday yet the last time Mark Rypien and the burgundy and gold emerged victorious over the Steelers.

When one team dominates over another for that long of a period, it’s safe to say it takes an extraordinary effort to turn the tide.

Unfortunately for Washington, that extraordinary effort was nowhere to be seen this weekend, and the results were predictable — with Pittsburgh cruising to an easy 27-12 victory over the Redskins.

Where did things go wrong for the burgundy and gold this week? Glad you asked.

2. “The Pit” by Silversun Pickups

They were so bad against Pittsburgh, that the Steelers honestly took it easy on them. Everyone knows the secondary is putrid. They’re so bad, teams don’t even need their quarterback to be involved to throw bombs for touchdowns (see: Bengals, Cincinnati).

But Ben Roethlisberger and friends had such an easy time moving the chains against the Redskins “defense,” that they didn’t even feel the need to try and stretch the field or waste their big plays.

They happily alternated between runs by someone allegedly named Jonathan Dwyer and dink-and-dunk passes from Roethlisberger and were still able to march up and down the field with ease.

Washington’s defense was unable to sack Big Ben. They  failed to create any turnovers. Honestly, I can’t think of a single thing they did well on Sunday.

I mean, technically one could argue they held Roethlisberger to just 222 passing yards (easily the lowest total by an opposing quarterback this season), but he still threw for three touchdowns. Plus, Dwyer became the first back to gain 100 yards or more against Washington this season, so they don’t even have that moral victory to cling to anymore.

And then there was DeAngelo Hall.

As you can see from the photo at the top of this page, he wasn’t too pleased with the officiating in Pittsburgh on Sunday. He chose to voice that frustration at the worst possible time in the worst possible way — melting down in a obscenity-laced tirade that resulted in 30 yards worth of penalties and an early trip to the showers for the cornerback.

It’s kind of hard to get the ball back and try to mount a comeback when one of your supposed team leaders is giving away chunk of free yards to the opposing squad. Maybe if he was a rookie, you could chalk it up to inexperience. But Hall is a 28-year-old veteran who should know better.

No one has ever won a pissing contest with an official. No one.

Even if you’re right and they’re wrong, there’s nothing you’re going to say in the heat of the moment that is going to change their mind. Only bad things come from that type of meltdown, so keep your helmet on and keep your thoughts to yourself.

Of course, even if Hall didn’t lose it, there’s zero reason to believe the offense was capable of clawing their way back into the game. That’s because seemingly every pass catcher who Griffin targeted managed to drop the football.

Leonard Hankerson couldn’t catch it a gimme. Dezmon Briscoe wasn’t any better. Santana Moss hauled in his third touchdown catch in two games, and yet, no one has anything positive to say about him because every other time the ball comes his way he dropped it. In short, without Pierre Garcon and Fred Davis in the lineup, RGIII has had to look for new players to throw the ball to and no one — and I mean no one — has been able to step up and show they can make a play.

The defense played so poorly so quickly that Washington’s offense was forced to abandon  the league-best ground game early on in this contest, which would have been fine if anyone could catch a pass. But the Redskins had at least 10 drops against the Steelers, which is an easy way to ensure your team struggles to put points on the board against a top-ranked defense.

And then there was the special teams unit, which continues to find creative and new ways to torture ‘Skins fans.

In addition to muffing a punt and struggling to have kickoffs reach the endzone, they somehow managed to botch an extra point.

Seriously, extra points are so ridiculously easy to convert that there are actually people out there who believe the NFL should just do away with them.

The only other team to miss an extra point this season is Minnesota. Every other team out there converts them in their sleep.

And yet, once again, the Redskins special teams unit is unable to do the most basic of tasks.

Here’s a radical concept for head coach Mike Shanahan — from now on, how about you don’t defer on the coin toss, okay?

See, your defense is really, really bad, so even though you’ve got some stats sitting on your desk that say team that defer have a better chance at winning games, you need to take into consideration just how often you’re forcing your rookie quarterback to have to play from behind because your defense blows.

Give Griffin and the offense the ball first and pray he can work his magic. Since the opposing offense hasn’t stepped onto the field, your defense won’t have let you down yet. If RGIII and friends can score early, then you’re actually putting pressure on the other team to try and keep up with you rather than what’s been going on lately.