photos from the sidelines: week 8 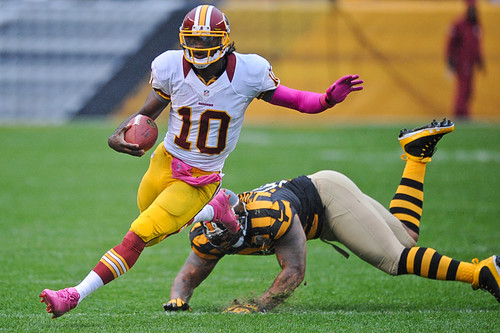 The Washington Redskins picked a fine time to suffer a team-wide collapse — failing to play competent football in any of the three phases of the game against the Pittsburgh Steelers Sunday.

No one on the offense appeared capable of catching the football. No one on defense seemed interested in slowing down a running back allegedly named Jonathan Dwyer. And the special teams unit — which has been laughable all season long — managed to screw up an extra point.

So once again, it seemed like Redskins rookie quarterback Robert Griffin III was on his own out there. As best I can tell, no one else in a burgundy and gold uniform bothered to make the trip to Pittsburgh.

That, of course, would have been good information to know beforehand. Then, maybe I could have taken the day off as well as stayed much, much dryer.

But since that wasn’t the case and I braved the elements just for you guys, please take a moment to check out my favorite photos I was able to capture from the sidelines this week. If nothing else, you can see pictures of Griffin doing great things and be happy he’s on the roster.

Seriously, this game was miserable as it was — I don’t even want to consider how much uglier it would have been without RGIII involved.