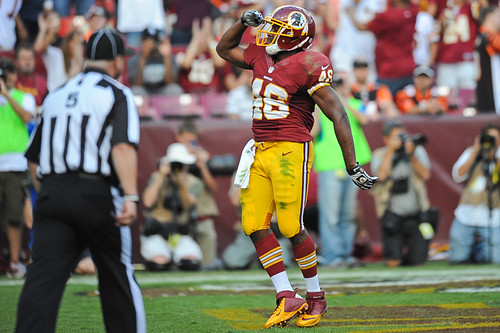 Heading into their Week 8 match-up against the Pittsburgh Steelers, the Washington Redskins boast the top ground game in football — averaging an impressive 177.7 yards per game.

While much of the attention continues to focus on quarterback Robert Griffin III, the dynamic playmaker who continues to find ways to elevate his game on a seemingly weekly basis, the fact is running back Alfred Morris is having a pretty incredible rookie campaign as well.

Through seven games, Morris trails only Minnesota’s Adrian Peterson* and Houston’s Arian Foster in the league’s rushing race with 658 yards and five touchdowns.

*Peterson has already played his Week 8 game — rushing for 123 yards and a touchdown against Tampa Bay. Coming into that game though, Peterson had also rushed for less yards than Morris on the season.

I cannot say enough about how impressive Morris has been thus far — especially, when you consider the fact that the Redskins essentially planned to come into the season with Roy Helu Jr., Evan Royster and Tim Hightower as their top three backs while Morris was pretty much an afterthought.

But all three of those players were banged up enough to create an opening for Morris, and he’s obviously made the most of it. And while he started the season strong, the 23-year-old has only gotten more impressive as he’s gained experience. Case in point, Morris has rushed 77 times for 395 yards and two touchdowns in his last four games (5.13 yards per carry).

Not too shabby for a sixth-round draft pick.

Spend five minutes talking with Morris and it’s impossible to not be impressed. He’s a youngster who is so respectful that he still says “yes sir” and “no sir” to his coaches. Because he came from a lesser-known school like Florida Atlantic, he’s the perfect combination of hungry and humble. Oh, and he’s proven to be a damn fine running back as well.

So how in the world does such a standout guy — someone who is so likeable on and off the field — not get selected until the sixth round?

According to this fascinating read by Dan Pompei of the National Football Post, this sounds like a case of lazy scouts not doing nearly enough homework on a hidden gem.

His initial grades didn’t excite anyone. He came to Florida Atlantic as a fullback, and he had the stigma of having the athleticism of a fullback. One of the scouting services had him weighing 203 pounds with 4.80 speed prior to his senior season. So scouts weren’t exactly beating down the doors at Florida Atlantic to get a good look at him, despite the fact that he was the team’s best player for three years and the coaches there loved him. And Florida Atlantic is not a stop on many top scouts’ itineraries.

Florida Atlantic is not a stop on many top scouts’ itineraries? Why the hell not? Any moron with a clipboard and a stopwatch can tune in to Alabama or LSU and find a dozen NFL ready players, but to be a top scout, shouldn’t you be willing and able to dig a little bit deeper?

Players like Ben Roethlisberger, Victor Cruz, Morris and countless others come from unheralded football programs. If you don’t know that by now, how can you be considered a top scout. But it doesn’t stop there. Once Morris finally got a chance to show scouts what he could do, they still found a way to blow it.

“Our biggest problem with Alfred Morris is he couldn’t run,” one executive said. “It shows you how unimportant the 40 yard dash is. Even though his 40 was not very good, he had a 10 yard burst. He had a 1.56 10—which is pretty good, not great. Maybe he can’t sustain it over 40 yards, but he knows how to run with pads on.”

This brings up one of my biggest pet peeves about the NFL draft process. Football isn’t played in your underwear. Players don’t just run in a straight line for 40 yards at a time. With apologies to the late Al Davis, a player’s 40-yard dash time is one of the most useless pieces of information imaginable.

Morris might not be able to shine in a meat market like the NFL combine, but he sure as hell has value in a zone blocking ground game. He has great vision and runs hard. Because he used to play linebacker, he isn’t afraid of contact. Most impressively, the first defender to get to him almost never brings him down.

And yet, because scouts thought he was a fullback (which half the league doesn’t even really use anymore), he couldn’t run a 4.4 40-yard dash and he came from a lesser-publicized school, most of the league didn’t even have Morris on their radar.

Morris was a reputed fumbler. At Florida Atlantic, he fumbled 16 times. That’s enough to make a lot of coaches completely disinterested. He also fumbled in Sunday against the Giants.

It’s that last line that really rubs me the wrong way — “he also fumbled Sunday against the Giants.” Yes, Morris turned the ball over against New York last week. But reading that sentence, you’d think he was as careless with the football as Rex Grossman or John Beck, and that’s simply not the case.

These are the facts: Morris has carried the ball 138 times and is on pace for more than 1,500 yards rushing this season. He has one fumble. That paints a pretty different picture than the reputed fumbler the lazy scouts wrote off, huh?

And because he’s such a high-character guy, it should come as no surprise that Morris was clearly unhappy with himself after committing his first NFL turnover.

“I fumbled, and if I have anything to say about it, I’ll never fumble again,” he said. “When I got the ball, I never really secured it all the way. It was kind of in my lap and I was trying to pick it back up. I tried to make a move while I was trying to put the ball under my arm and I ended up dropping it. I wish it didn’t, but it did.”

Maybe I should be happy that so many other teams are run by narrow-minded individuals. Maybe I should do my best to avoid drawing attention to the type of low-risk, high-reward players this regime places a premium on. But at the end of the day, I can’t help but be agitated that such an outstanding young man was  almost an NFL afterthought because so many of the “so-called experts” continue to do such a piss poor job of identifying young talent.

Thankfully, that doesn’t appear to be the case here in Washington.