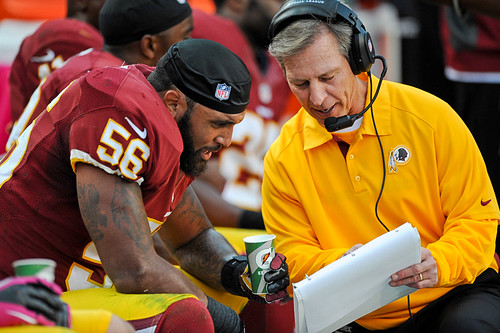 Washington Redskins middle linebacker Perry Riley grew up just outside of Atlanta, Georgia, in what he calls a “regular, close-knit family.”

Everyone got along, everyone enjoyed spending time together and, most importantly, everyone loved playing sports.

It should come as no surprise Riley started playing football as soon as he was old enough, and from day one, he admits he was hooked.

“If I wasn’t at football practice, I was playing football in the neighborhood with my friends,” he said. “That was all I wanted to do.”

That’s probably because his father, Perry Riley Sr., was an experienced football player as well.

“He was a huge football fan and he played college ball in Virginia,” Riley said. “I can remember watching football with him and learning the game in my living room. Once I started playing, I was actually pretty good at it. People couldn’t really tackle me and I was pretty good at tackling other people, so I stuck with it.”

Naturally, when Riley was ready to begin his football career, his father was once again right there with him.

“My dad has been my football coach since I was five years old,” he said. “He coached me all the way to high school, and he wanted to come out and help the coaches at my high school, but they told him he couldn’t.”

It’s noble for a parent to want to be so involved in his child’s life, but just how good was Riley’s father as a football player?

Two Perry Rileys — one on offense, one on defense. If Riley the running back had the ball with a chance to win the game and the only defender standing between him and victory was Riley the linebacker, who makes the play to decide the outcome of the game?

“If you ask him, he’d probably say I couldn’t tackle him,” he said with a laugh. “But if you ask me, I think I could get that tackle.”

When it was time to select a college to attend, Riley had plenty to choose from. He was considered one of the top linebacker prospects in the state of Georgia, which is why most of the SEC and ACC schools were knocking on his door.

Although his father pushed for him to go to nearby University of Georgia, Riley kept an open mind during the recruiting process. And at the end of the day, he felt a connection with the Louisiana State University coaching staff.

“Everything just clicked,” he said. “LSU was just a perfect fit. During my visits with the coaches and again when they came to my house, I felt a better vibe with them than anyone else. It kind of broke my dad’s heart at first, but it ended up working out great.”

“It’s hard to explain what it’s like to win a national championship. It really is one of those things you have to experience to truly understand,” he said. “It’s a great feeling because you work so hard for it. Football doesn’t just start in August when the games begin. Every year you’re faced with a long, grueling offseason and you put a lot of time and hard work into one goal – winning a championship.

“When you finally accomplish it, it’s the best feeling in the world,” Riley continued. “It’s surreal. It’s so hard to explain, but your body just kind of goes numb. When the clock hits zero and you start to see the confetti and then you’re holding that crystal football, your body just goes numb. It was amazing.”

The following season, LSU blew out Georgia Tech in the 2008 Chick-fil-A Bowl, 38-3. Riley was named the defensive MVP in that game and finished the season as a finalist for the Butkus Award, which is awarded to the top linebacker in the country.

By the time his collegiate career was over, Riley had become a consistent performer on one of the top defenses in the country. But he still wasn’t sure how things would play out with the NFL Draft.