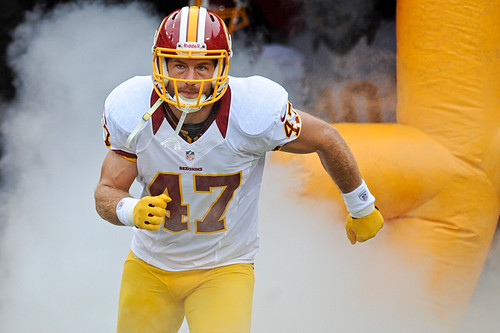 Seemingly every time a football fan wants to talk to me about the Washington Redskins this season, the conversation centers around one of three individuals.

Unsurprisingly, all Redskins talks this year begin and end with franchise quarterback Robert Griffin III. Regardless of whether the person roots for the Redskins or not, the most dynamic player in the NFL today is all anyone wants to focus on.

Of course, that’s because week after week he continues to find creative new ways to elevate his game. Whether he’s racing 76 yards for a game-winning score against the Minnesota Vikings or conducting a “Chinese fire drill” in the backfield on 4th-and-10 against the New York Giants, he continually finds way to deliver in key situations.

Sadly, the second most talked about member of the franchise is defensive coordinator Jim Haslett.

That’s because, for as good as RGIII has been since he stepped onto an NFL field for the first time, Washington is still just 3-4 because Haslett’s defense seems utterly incapable of stopping anyone.

Six out of seven opposing quarterbacks have thrown for 300 or more yards against the Redskins this season. The seventh — Tampa Bay’s Josh Freeman — was “held” to 299 passing yards.

‘Skins fans see how Griffin has brought new life into a once-pitiful offense and wonder how the defense, which for years was the strength of this team, became so terrible so abruptly.

It wasn’t Haslett who allowed Giants receiver Victor Cruz to blow by him as soon as the ball was hiked (that was cornerback Josh Wilson) or to get behind him (safety Madieu Williams) for a backbreaking 77-yard touchdown, but he’s the guy in charge of the guys who can’t do anything right these days.

Washington’s defense, which has received the bulk of the team’s resources since head coach Mike Shanahan came to town, has already blown a fourth quarter lead three times in seven games this season, which is why more than a few local fans go to sleep at night dreaming of the day Haslett is relieved of his duties.

The third name brought up most often this season was a guy who, until this week, wasn’t even on the roster anymore. Fan favorite Chris Cooley was let go during the offseason because the team felt they had more than enough depth at tight end to survive the loss of the Pro Bowler.

Shanahan felt like the trio of Fred Davis, Niles Paul and Logan Paulsen was solid enough to fill the void created by the release of the best tight end in Redskins’ history, which might have been the case if Paul could actually catch a pass that’s thrown to him every so often.

But with Davis lost for the year due to an Achilles injury, Shanahan wisely believed he needed more than just Paul and Paulsen on the roster, so welcome back, Captain Chaos.

“Any time you lose a guy like Fred, it’s always tough,” said Shanahan. “Fred had a heck of an offseason. I was really pleased with how he handled the OTAs and summer camp. He was having a heck of a year. Fred is really disappointed. He was excited about himself, his play, and we were excited about him. Like all injuries, guys have to step up and play at a high level. I thought Logan played well and Niles played well. I’ll have Chris come in knowing the system and we expect him to play at the level he has played at in the past. Now guys have more of an opportunity to show us what they can do.”

So just how long did it take Shanahan to reach out to Cooley?

And just how excited was Cooley to get that phone call from his previous employer?

“I went to bed about 3:30,” Cooley said during TV interview. “I went to bed, but I just didn’t sleep in bed because I was so excited to come back to work. I talked to coach for 20 minutes, and he said, ‘We’re gonna count on you. We need you to step up and play.’ I’m not sure what the role will be week one, or week two as I transition into it. I got prove to them that I should be on the field. And I gotta prove it right away, and that’s what I’m gonna do. I have the chance, I think, to make the most of a great opportunity this year, and I’m looking forward to that.”

I think it’s safe to say that, as happy as Cooley is to be back in the burgundy and gold, ‘Skins fans are even more thrilled. Like he said, it might take a week or two for him to get back into playing shape, but it’s not tough to envision the roar of the crowd at FedEx Field if/when Cooley takes the field during pregame introductions.

He’s the most productive tight end in franchise history and a player who has never tried to hide just how much he loves being a member of the Washington Redskins. Most players happily go wherever the biggest pay day is available, but Cooley is on the record as saying he’d rather retire than ever play for another franchise.

And when the team let him go, he remains true to his word — opting to sit out rather than playing for anyone else.

Now, with Davis lost for the year, the Redskins need him once again. Paul has yet to make a single play on offense to convince anyone he’s capable of being an NFL starter and Paulsen might be one of the few players in town Cooley can beat in a foot race.

I’ve got a feeling that sooner rather than later, Cooley will be catching passes in traffic from Griffin and contributing to this offense in no time. And when that happens, it’s a safe bet ‘Skins fans will react accordingly.

Now, if only Cooley could also play defensive back …