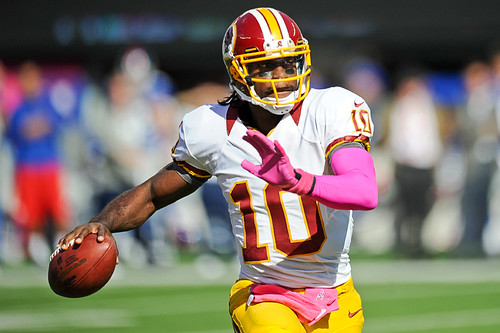 With a chance to send a message to the rest of the NFC East, the Washington Redskins were uncharacteristically careless with the football Sunday — turning the ball over four times in a disappointing 27-23 loss to the New York Giants.

So rather than moving into a tie for first place, the Redskins are now once again in last place in the division and, for better or worse, have no one to blame but themselves.

Not only did they turn the football over four times during a six-possession span in the second half, but Washington also failed to score touchdowns on two trips to the red zone.

That’s not exactly the best approach to defeating the defending Super Bowl champions.

The saddest part is, the Redskins picked up 248 rushing yards against New York — which was the team’s best day on the ground since ’07. Thanks to the dynamic duo of Griffin and running back Alfred Morris, the Redskins were able to march up and down the field against the Giants for much of the afternoon, but when you’re settling for field goals rather than touchdowns, it’s only a matter of time before it comes back to bite you.

Washington controlled the time of possession throughout the first half and kept a very-talented Giants offense off the field for long stretches of the game, and yet, the score was still tied at 13-13 during the intermission.

Griffin completed 20 of 28 passes for 258 yards with two touchdowns, one interception and a quarterback rating of 108.9. He spread the ball around to eight different receivers and also picked up 89 rushing yards on nine carries. But one play in particular stood out for RGIII on Sunday.

On 4th-and-10 from the Redskins’ 23-yard line, Griffin made a play that I can’t honestly say I’ve never seen a member of the Washington Redskins make before in my lifetime.

Basically, the Heisman Trophy winner caught the snap, felt pressure by two different New York defenders, rolled out of the pocket, felt the pressure once again closing in and then ran around like a chicken with his head cut off … until he was able to find tight end Logan Paulsen at the absolute last minute for a huge 19-yard gain to keep the drive alive.

It was a wonderful display of RGIII’s improvisation skills and freakish athleticism. And for as awesome as all of that was, the most impressive part of the play might be that Griffin had enough arm strength to actually get the ball downfield to his intended target even though he had to throw the ball off-balanced while still on the run.

And I wasn’t the only one who walked away impressed after that play.

“That guy is flat out unbelievable, man,” said Giants defensive end Osi Umenyiora. “I’m not going to lie. That’s the best quarterback we’ve played this year for sure. And it’s unfortunate that he’s a rookie because he’s going to be around forever doing stuff like that, and that’s crazy.”

“I think he’s going to change the league,” said defensive end Justin Tuck. “If he continues to do what he’s doing, he’s going to be good for a long time.

“I’m pretty mad at the football gods for putting him in the NFC East,” Tuck added. “To face that guy twice a year is going to be a headache.”

Consider this was the same team that said Griffin needed to earn his nickname at the NFL level before they would refer to him as “RGIII,” I think it’s safe to say he’s won them over.

On a day when Washington’s offense racked up a season-high 480 yards, two seldom used pass catchers played a big role in keeping the offense on the field. Veteran receiver Santana Moss has been a consistent performer since the day he came to town, but for whatever reason, the ball just hasn’t come his way much this season.

Tight end Logan Paulsen is a solid special teams player, works hard and provides depth at a valuable position, but he’s never going to be a focal point of this offense. Well, those two players came up big against the Giants.

Moss finished the game with three catches for 67 yards and two touchdowns while Paulsen set career highs in catches (four) and receiving yards (76). Considering receiver Pierre Garcon has quite possibly the slowest healing foot in the history of modern medicine and tight end Fred Davis is done for the year, it would be nice if these two guys were given another opportunity or two to show they can handle the additional workload.

The Redskins have now rushed for 1,244 yards this season, the most the team has ever rushed for in the first seven games of a season since the 1970 AFL-NFL merger, and the team is still only 3-4. How is that even possible?

The answer, of course, is that the defense suffers mental lapses at the worst-possible times.

This week, Washington’s secondary played a pretty solid game for most of the afternoon … until they allowed a backbreaking 77-yard touchdown reception by Giants receiver Victor Cruz in the final two minutes of regulation. Best of all, Cruz was actually supposed to be double covered on the play, but they still couldn’t stop him from gashing the heart of the defense when the game was on the line.

Oh, and it should also be noted that the defense once again struggled mightily on 3rd downs (allowing New York to convert eight of 12 for the game) and failed to consistently pressure Giants quarterback Eli Manning, who was sacked once and hit just six times on 40 passing attempts.

Considering how good this offense is and how impressive the rookie quarterback has been, it’s a damn shame this defense is unable to make a play when called upon.

5. “This Is Gonna Hurt” Hoobastank

Tight end Fred Davis is now lost for the year with a torn Achilles. Middle linebacker London Fletcher left the game with a hamstring injury and missed a good chunk of the action. Garcon gets onto the field about as often as I do these days. Linebacker Brian Orakpo and defensive end Adam Carriker are out of action. Safety Brandon Merriweather couldn’t make it through warm-ups without hurting himself once again and offensive lineman Jammal Brown might as well be on a milk carton at this point.

I understand injuries are a part of the game, but damn — enough is enough.