photos from the sidelines: week 7 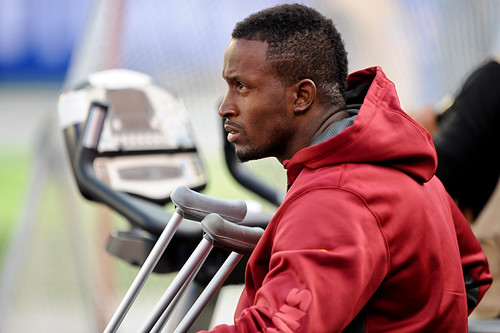 How is it that an image can say so much with so little action taking place in it? Unfortunately for Washington Redskins tight end fred Davis, this shot that was captured Sunday speaks volumes, as the 26-year-old  can only look on in disappointment after suffering a torn Achilles injury that will abruptly end his season.

After missing the last four game of the 2011 season because of a suspension for violating the NFL’s substance abuse policy, Davis felt he had something to prove in his fifth season in Washington. While he was off to a solid start, the USC standout failed to finish a game with 100 yards and had yet to find the end zone this season.

And just like that he’s done for the year.

Redskins fans have definitely got to feel bad for Davis, who has been a dependable target for whoever has lined up at quarterback during his time in Washington. Now the team has one less weapon on offense and Davis has a long rehab ahead of him.

If you would be so kind, please take a moment to check out my favorite photos I was able to capture from the sidelines this past weekend. If nothing else, I can assure you that not all of them are as much of a downer as this image. Don’t do it for me. Do it for Davis.