how clutch is robert griffin III? 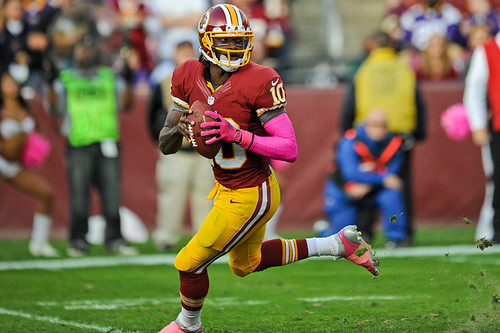 Obviously the Washington Redskins believed Baylor quarterback Robert Griffin III was a once-in-a-generation talent when they traded away a stack of future first-round draft picks for the chance to land him. But I honestly don’t believe that in their wildest dreams, the decision makers at Redskins Park could have envisioned the Heisman Trophy winner was going to be this good this quickly.

Since his first game in New Orleans, Griffin has been the talk of the entire NFL — dazzling players, coaches and fans with his ridiculous speed, amazing athleticism and pinpoint accuracy.

While the Redskins are just 3-3 through six games, there’s no doubt that RGIII has given his team a chance to win each and every time they’ve taken the field this season. And the craziest part of it all is that — for as good as he’s been — he still finds ways to elevate his game in key moments.

For example, as this NFL Films video suggests, Griffin excels at catching a defense off guard when it matters most this season. The Redskins have scored a touchdown on 13 of 14 attempts inside the 10-yard line this season. Four of those touchdowns came courtesy of quarterback draws from RGIII.

If a defense over commits in those situations in an effort to try and stop Griffin from keeping the ball and running it into the end zone, then he calmly drops back and finds an open receiver — like he did during the second quarter against Minnesota last week on a six-yard touchdown pass to fullback Darrel Young.

Griffin isn’t picky. Leave a man open and the NFL’s most accurate passer will hit him in stride for an easy completion. Drop back in coverage and he’ll tuck the ball and happily take it to the house himself. For a team that has struggled to score points consistently for much of the last decade, it’s been a welcome sight. For opposing defenses, it’s been a nightmare.

And that’s not the only time RGIII has elevated his game this season. Griffin continues to deliver when his team needs him most — not only in the red zone, but also during the fourth quarter of close games.

Just look at the last two fourth quarters Griffin has played in — against the Vikings and the Tampa Bay Buccaneers, the 22-year-old has seemingly single-handedly ensured his team left those game victorious.

With his team trailing Tampa Bay by a score of 22-21 with 1:42 left in regulation, Griffin calmly orchestrated a seven-play, 56-yard drive that gave kicker Billy Cundiff a chance to kick a game-winning field goal.

Two weeks later, with Washington clinging to a 31-26 lead with roughly three minutes left to play, Griffin found a sliver of space in Minnesota’s defense and exploited it for a 76-yard touchdown run that sealed the victory in dramatic fashion.

“I was ecstatic. That was as good of a play as I’ve been a part of,” said offensive coordinator Kyle Shanahan. “It was real fun to watch – not something that I’ve seen too much from a quarterback. Right when he broke the pocket, I knew he had a chance to get the first down. Right when he got it, I started to really get excited because I knew we had a chance to run the clock out then. Then when I saw him square his shoulders up, I was like, ‘Holy cow, he’s going to go the distance.’ It was fun to watch.”

Anyone who has followed this team for any significant length of time knew that if the Redskins offense gave the ball back to the Vikings, they were a lock to march down the field and win the game. That’s because that’s how most close games have played out over the last two decades. For years, the Redskins played just well enough to lose respectably.

And then this kid shows up and all of the sudden, the Redskins are no longer an easy win for any halfway respectable opponent. Everyone involved hoped Griffin’s jaw-dropping talent at the college level would eventually translate into him becoming an above-average player in the pros, but even his head coach admits Griffin’s fast start has been a bit of a welcome surprise.

“Everything kind of surprises you a little bit because you don’t know what to expect going in,” Mike Shanahan said. “You like the guy, you’ve seen what he has done in his collegiate career, being a Heisman trophy winner and a nice guy, and you really don’t know exactly the makeup of somebody until you put them under pressure. How does he do in a third or fourth quarter? How does he do after a loss? How does he handle situations after a win? I just liked the way Robert has handled himself from day one. He’s cool, calm, and collected and nothing seems to bother him and he always seems to say the right thing and the right time; not many rookies do that.”

Not only has RGIII been clutch in the red zone and at the end of games, but he’s even found a way to step up his game in other key situations. Take, for example, this blog post by Washington Post writer Mike Jones, which details how the more players a defense sends to pressure Griffin, the more likely he is to make them pay.

How many Redskins quarterbacks over the last two decades honestly got better the more opposing teams blitzed them? Seriously, I can’t think of anyone other than Griffin who could make that claim.

“Just throwing everything when I’m supposed to throw it, and getting to my check-downs when I’m supposed to get to my check-downs,” said Griffin. “I think I’m doing a better job of managing that part of the offense. But that comes through hard work, through game-time reps, just knowing where to go with the ball. Everything’s clearing up. Every game that goes by, things are clearing up, and that’s something I’m excited about for the future.”

The statistics show that defenses are better off rushing three guys rather than four or five against RGIII, but if you sit back and take away his options in the passing game, he’s still more than capable of moving the chains with his feet. It’s almost not even fair how good the new face of the franchise is already.

“Just being patient,” Griffin said. “Taking what the defenses are giving us and just taking each game as its own. We’re doing different things every game. We’ve got to see how different teams respond to that. So for us, it’s about making sure we execute what we went to the field to do. We’ve done a good job of that in our other games, even though we haven’t won all of them. I think we’ve grown as a team and that’s good.”

There’s still plenty of football left to be played this season, but one thing is clear — as long as Griffin remains healthy, he’s a force to be reckoned with. And the closer the game is and the higher the pressure situation, the more likely he is to rise to the occasion.