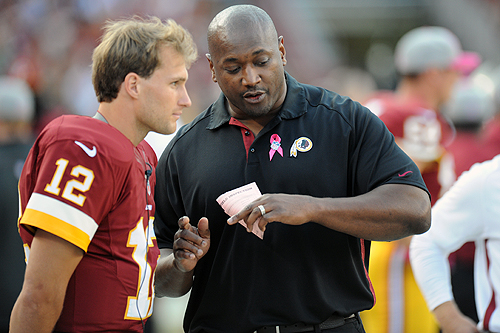 [Editor’s note: This season, the Washington Redskins have asked my brother, Joel Murphy, and I to occasionally write feature stories for the team’s official website. This article, which was written by Joel, is our latest contribution, so please check it out.]

After spending the last seven of his 15 NFL seasons with the Washington Redskins, many D.C. sports fans were sad to see defensive lineman Phillip Daniels name left off of the active roster at the end of last season. Luckily, he didn’t go too far.

The team signed Daniels on as their director of player development, an important front office job that Daniels hopes will be the first step to becoming a NFL coach.

Daniels sees his new job largely as a mentor role. He also helps players with logistics, like finding housing, hiring a nanny or doing background checks on potential employees. Daniels also makes himself available to talk to guys about football, life or anything else that’s on their minds. And on game days, he helps enforce the league’s uniform code and acts as a liaison between the referees and players.

One of the key aspects of his job is helping rookies transition to life in the NFL. Over the summer, Daniels took the Redskins rookie class to the league’s symposium in Canton, Ohio. He ate breakfast and lunch with the nine rookies and spent most of the day with them, getting to know each of them and offering advice.

“My whole rookie class, I wouldn’t trade them for the world,” said Daniels.

As part of the Rookie Success Program, the rookies meet with Daniels every Monday morning. He offers them advice for life on and off the field and tries to help them avoid the stumbling blocks college athletes potentially face when transitioning to the pros.

While the rookie class isn’t much older than his son DaVaris, who is currently a sophomore at Notre Dame, Daniels still remembers what it was like when he was starting out in the league.

One thing that’s changed since Daniels was a rookie is the emergence of social media. Daniels cautions players about sharing too much information online – like, for example, posting where they are going or when they will be at a particular location on Facebook or Twitter.

Ultimately though, Daniels realizes that all he can do is offer suggestions and hope the players listen.

Luckily, so far things have run fairly smoothly for the director of player development.

“We have a good group of guys,” Daniels said. “We haven’t had any problems. I hope it stays that way.” 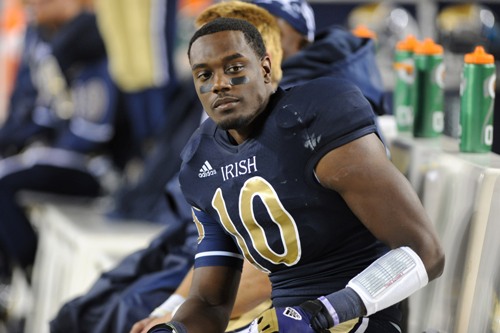 In fact, perhaps the biggest bone of contention the players have with Daniels is his habit of wearing Notre Dame gear around the office. Every Friday, in support of his son DaVaris, who plays wide receiver for the Fighting Irish, Daniels wears Notre Dame apparel.

“Nobody likes Notre Dame for some reason because I guess they get everything they want, they’re on national TV every week, they’re always talked about,” Daniels said. “They’ve got a lot of haters; I’m going to tell you that right now. A lot of them in our own locker room and our own training room.”

While not all Redskins fans may be Notre Dame fans, they will be happy to hear that DaVaris has already made it known he’d love to one day don the burgundy and gold.

“I didn’t realize how big a Redskins fan he was until recently,” Daniels said. “I thought he was cheering for them because I was on the team.”

Even though his father is no longer on the gameday roster, there is still one player in particular that the young wide receiver enjoys watching play.

“He loves RGIII,” said Daniels. “He said he’d love to catch passes from him one day. He talks about him all the time.”

By the time DaVaris reaches the NFL, Phillip hopes to be coaching.

“I love what I do, but I think I’m ready to coach. I’m ready to be on the field coaching a position,” Daniels admitted. “When defensive coordinators come up to you and tell you you need to get into coaching, that means something.”

Daniels got his first opportunity to coach during the offseason. For this year’s NFLPA Collegiate Bowl game, he was in charge of the defensive line for the American squad. Daniels really enjoyed the experience.

“I had fun with it. I was at home. My team played well. You know you’ve done a great job when you only have three days to work with guys and they come up and tell you they learned more in three days than they learned in most of their whole college career,” Daniels said.

His biggest lesson to players – both as a coach and as the director of player development – is simple: “Do everything right when nobody’s looking.”

It’s that attitude that served him well in his 15 year career with the league. And it will continue to serve him well as he eventually ventures into his second career as a coach.