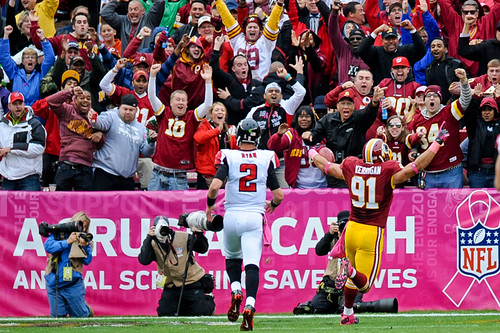 From that first season when he was just a fifth grader all the way through his highly-productive college career at Purdue, Kerrigan had never intercepted a pass.

Of course, in his very first game as an NFL player, the 24-year-old picked off New York Giants quarterback Eli Manning and rumbled nine yards for the eventual game-winning score. This was obviously a monumental moment for Kerrigan — who celebrated the occasion by jumping up and down like a four-year-old on Christmas while his teammates mobbed him.

It was a joyous occasion for everyone involved — well, except for me because I almost got trampled by Kerrigan in the process.

One year later, and the former All-American was at it again — this time victimizing Atlanta Falcons quarterback Matt Ryan.

The second-year pro anticipated a Ryan dump-off to the running back, got in between the quarterback and his intended target and then was ready to make a play once the football came his way.

“I saw the offensive tackle give me a little free ride, like most tackles do when it’s a screen pass and I saw the back scatting and I also tried to trail him a little bit,” Kerrigan said. “Fortunately, I was right in the throwing lane and I was able to make the play.”

Once Kerrigan secured the ball, he outraced Ryan 28 yards for the second touchdown of his young career. This time though, the Muncie, Indiana native opted to share the moment with Redskins fans as he performed a “Landover Leap” and jumped into the waiting arms of Redskins fans sitting behind the end zone.

“The first thing I saw when I got into the end zone was the fans,” Kerrigan said. “I’ve always wanted to go into the stands after a score, and when the opportunity presented itself, I jumped at it.”

It was a great moment for the burgundy and gold and the highpoint for the Redskins on a day that saw franchise quarterback Robert Griffin III knocked out of action due to a concussion. Speaking of Griffin, he joined in on Kerrigan’s fun one week later, capping off a 76-yard touchdown run with a “Landover Leap” of his own.

“The jump was fun,” Griffin said. “I actually tried to leave and they held me down. Fans, gotta love them. I just sat there and enjoyed the moment for a little bit. I didn’t want us to get a penalty so I was trying to get down. At the end of the day I think the refs and everyone understood how big of a moment that was. They didn’t throw any flags or anything like that. But to come back after last week, getting knocked out of the game and personally, myself, feeling like I let a lot of people down …

“The players were telling me that I didn’t let them down,” he continued. “The coaches were saying the same thing, but as a competitor, as a player and as their teammate, I felt like I did. So to come back and play the way that we did as a group and then to have the outcome that we had, for me to be such a big part of it, was huge for me to show them that I’m going to come out, I’m going to play smart, I’m going to help us win and then I will always be there for you in the end.”

After eight-straight home losses, it’s clear that the FedEx Field faithful are starting to get spoiled with all of this love and attention. In back-to-back weeks, ‘Skins fans have had a key offensive and defensive player head into the stands to join in the fun, so I was curious to hear what Kerrigan thought of RGIII’s “Landover Leap.”

What was his reaction to seeing Griffin replicate his celebration?

“I just put my hands in the air and was just smiling,” Kerrigan said. “It was an unbelievable play, and when you’ve got a guy like that, I’m just glad he’s on our team.”

As for the execution of the “Landover Leap,” Kerrigan gives the nod to RGIII.

“He had a higher wall to jump on, so he actually had to leap,” he said. “Mine was more of a ‘Landover sitdown’ because the wall only came up to the bottom of my butt. Mine wasn’t so much of a leap, but his was great.”

These two plays are easily the two most exciting moments of the Mike Shanahan era, and the fact that they came courtesy of the team’s last two first-round draft picks has got to make the local fanbase feel good. Well, if it’s up to one of Washington’s team captains, these two plays are only the beginning of something special.

“What we want to create is an environment when teams come in here and they know it’s going to be a long day,” said middle linebacker London Fletcher. “I still would like the crowd to be louder. I think teams can get comfortable with the crowd. I would like our stadium to be even more hyped up. When you come in here, let’s be loud. Let’s get some false starts on the opponent’s offense.

“From that standpoint, I would like our fans to be louder, especially on third down situations,” Fletcher continued. “When we go on the road, that’s what happens. Be louder, fans, and we’ll play better. I want them as loud as they were when Robert scored that touchdown. That’s how I want our fans to be.”

As long as the players keep making these type of game-winning plays on the field, I think it’s safe to say the fans will have plenty of reason to cheer.