photos from the sidelines: week 6 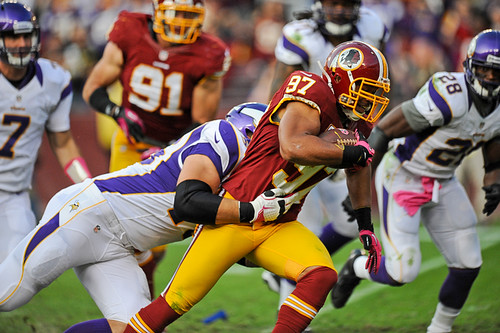 It took 392 days, but the Washington Redskins finally rewarded the FedEx Field faithful with a much-needed victory.

After losing eight-straight games at home — which was by far the longest home losing streak in the NFL — the Redskins got their act together with a convincing 38-26 victory over a Minnesota Vikings squad that came into the game with an impressive 4-1 record.

That’s not the only bad streak that Washington managed to snap Sunday. They also managed to finally win a game in which their defense scored a touchdown, after having gone 0-3 in such games earlier this season. And best of all, the defense actually pressured the quarterback consistently, caused turnovers and didn’t give up big plays.

So yeah, it was definitely a memorable afternoon for the burgundy and gold. So please take a moment to check out my favorite photos I was able to capture from the sidelines as the Redskins finally found a way to win at home. Who knows when it might happen again?