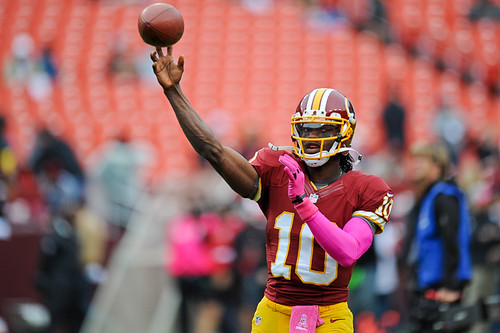 Although the Washington Redskins were defeated by the undefeated Atlanta Falcons 24-17 and lost their starting quarterback in the process, the game shouldn’t strictly be viewed as a negative.

If anything, the game film from this Week 5 match-up should be played on a continuous loop at Redskins Park this week in an effort to drive home some key points to a few central characters.

Each of the three quarterbacks on Washington’s roster — Robert Griffin III, Kirk Cousins and Rex Grossman — should use the lessons learned from this defeat to make them better players moving forward.

For Griffin, the lesson is simple — pick your battles, bro.

Through the first four games of the season, RGIII was electric. Every time he had the ball in his hands, teammates, fans and even opposing players knew the Heisman Trophy winner was capable of something special.

Whether he was picking apart defenses with his pinpoint accuracy or racing past defenders to move the chains with his legs, Griffin has absolutely been as good as advertised.

That being said, more than a few ‘Skins fans worried that his coaching staff wasn’t doing enough to protect the new face of the franchise and many became skeptical that he could survive a 16-game season unless something changed.

That’s because head coach Mike Shanahan and friends allowed Griffin to carry the ball 41 times in the first four games. Now, let’s conservatively say that Griffin got hit during passing plays five times a game and factor in the nine times he was sacked during the first four games and he was hit/tackled/roughed up 70 times through four games.

I don’t think there’s a reasonable person out there who believes any quarterback could sustain his health over the course of a season taking that level of punishment on a weekly basis, and it appears the coaching staff got the message.

During the Falcons game, Griffin was used differently than in previous weeks. Sure, he still did a fair share of roll outs and bootlegs, but he was only asked to run the ball once and, best of all, Griffin was only hit three times on 18 passing plays.

The message was clear — this kid gives us a chance to win each and every Sunday, so let’s do our best to keep him healthy. And yet, this was the game when the worst-case scenario came to life, as RGIII was knocked out of action thanks to a devastating hit delivered by Falcons linebacker Sean Weatherspoon.

His coaching staff finally understood where concerned fans were coming from and seemingly did everything they could to keep him healthy.

So naturally, Griffin tries to extend a play and ends up with a concussion. Had he been able to cut his losses earlier in the play and either step out of bounds or get down to the ground sooner, everyone would be feeling a whole lot better about things at the moment.

“I think with anybody, every game you want to learn from your experiences,” Shanahan said. “The main thing with this is that he needs to know that he helps the team more if he gets up for the next play as our quarterback.”

The team says Griffin has been cleared to return to practice and he’s still the player who gives this team the best chance to win every time they take the field, so there’s no reason to think he won’t learn from this.

Sure, he’s competitive and he knows football is a contact sport, but he’s also got to understand just how big the drop off is on this offense without him running it.

For Cousins, the lesson is pretty cut and dry — know your limitations.

Rather than trying to win a game on a single throw, the Michigan State standout should learn to take what a defense gives him. He should also realize that opposing defenses at this level are entirely too talented to let a rookie quarterback get away with staring down or locking in on a receiver.

“Fred Davis was who I was trying to throw to on the first one and I just tried to pull him away from his defender and I did it too much,” Cousins said. “I needed to come to the running back over the middle — that was the proper throw, and didn’t do it obviously.

“The second one, I was just trying to do too much. I was trying to get it all back on one play,” he added.

Cousins is a bright young man with an equally bright future ahead of him. This obviously wasn’t the outcome he wanted — throwing interceptions on the final two drives of the day — but he has the right mindset to learn from his mistakes quickly.

“It wasn’t the result that I wanted in the end, but there were good things I can take away from it,” he said. “There are other things I need to learn from and I will certainly do that.”

For Grossman, the lesson couldn’t be clear — you’re never seeing the field again, if they can help it.

And honestly, I’m okay with it.