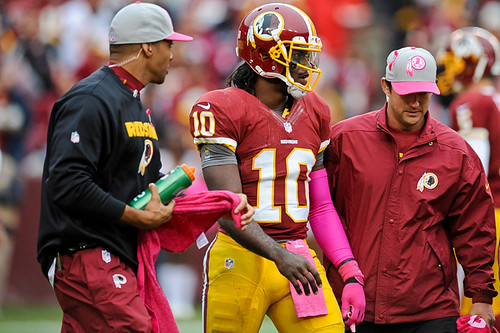 Over the last two decades, the Washington Redskins have lost plenty of games and honestly, since FedEx Field opened in 1997, they’ve lost more than their fair share of home games as well.

So there’s nothing particularly newsworthy about the Redskins falling to 2-3 after losing to the undefeated Atlanta Falcons, 24-17.

But when quarterback Robert Griffin III gets knocked out of the game with a concussion, it’s officially time for ‘Skins fans to panic. Or drink heavily.

The official stat sheet shows that Griffin carried the ball just once on the day — a seven-yard gain. But on the team’s second drive of the third quarter, Griffin opted to roll out to his right, wasn’t happy with what he saw downfield and headed toward the sidelines.

Unfortunately for everyone involved, RGIII didn’t step out of bounds once he got to the sideline. Instead he tried to gain an extra yard or two by waiting until the last minute to slide and was drilled by Falcons linebacker Sean Witherspoon.

Griffin’s head slammed back into the turf and, just like that, his day was over.

“He wasn’t sure what quarter it was in the third quarter,” said head coach Mike Shanahan. “At that time, when he wasn’t really sure what the score was or what quarter it was, we knew he had a mild concussion – at least according to the doctors. He feels good right now – a lot better right now. But that was the situation, why he didn’t go back into the game.”

2. “Some Day You Will Be Loved” by Death Cab For Cutie

The Redskins held a narrow 10-7 lead when Kirk Cousins stepped onto the field for the first time as an NFL quarterback.

The team’s first drive under the Michigan State standout was anything but memorable — three plays for three yards and then a Sav Rocca punt. And Cousins’ second drive wasn’t looking much better … until he connected with receiver Santana Moss for a 77-yard touchdown on 3rd-and-9.

Clearly someone in the Atlanta secondary blew their assignment, because Moss was completely open almost immediately. And yet, Cousins took a deep breath, and then calmly lofted a pass into the wide open arms of Moss for his first-career touchdown pass.

That was the moment more than a few local fans thought to themselves, “This kid just might be able to finish what Griffin started.” Cousins, though, knew there was still plenty of work to be done if the Redskins were going to beat one of the NFL’s top teams.

“I understand that it was a long game and I kept saying to guys we have to finish,” he said. “We have probably two or three more possessions left. Nobody was getting too high or starting to pat ourselves on the back. We knew we still had a lot of work still to be done in little time. The Falcons’ offense and what they had, we didn’t start to sit back and relax. Certainly it was a good play and we need to be able to make more of those going forward.”

And then Cousins threw interceptions on Washington’s final two drives of the game.

“It’s difficult, but you don’t sign up to play this game not expecting it to be difficult,” Cousins said. “Bottom line is I didn’t get it done the way I wanted to today. But what I have to look at, the perspective I am taking, is that I have to learn from it and get better. I am going to pick up things that are invaluable for going forward. ”

3. “Kiss With A Fist” By Florence + The Machine

No sense in sugar coating it — Washington’s defense has been atrocious all season long. They’ve allowed every quarterback who lines up against them to march his team up and down the field with ease. They’ve been unable to stop any talented pass catchers that bothered to show up against them and they’ve given up more big plays than anyone else in football.

The Falcons, of course, have been a juggernaut so far this season. Quarterback Matt Ryan has played as well as anyone and his talented receivers — Roddy White and Julio Jones — are a lethal combination. Add in a solid running back in Michael Turner and a future Hall of Fame tight end in Tony Gonzalez and this was a nightmare matchup for the Redskins porous defense.

Somehow, some way, the Redskins defense outplayed and nearly outscored Atlanta’s potent offense in the first half — thanks largely to linebacker Ryan Kerrigan’s 28-yard interception return for a touchdown.

Whether the Falcons made some halftime adjustments or the Redskins as a whole suffered a letdown once Griffin left the game, is tough to say, but Atlanta’s offense came alive in the fourth quarter — scoring 17 points in the final frame to remain undefeated.

“We did some good things, we did some bad things. Not enough good things,” said middle linebacker London Fletcher, who finished the game with 20 tackles. “I think we did some things in the first half when we were going more coverage-wise and three-man rush, stuff like that. Matt Ryan had a lot more time to hold the football and we were looking more from a coverage standpoint. Third down, they were able to convert a couple times even with our four-man rushes, so those are things that were disappointing. I thought we stopped the run pretty well. [We] came away with two turnovers and Ryan [Kerrigan] scored a touchdown. We did some good things, but not enough to win the game.”

Random stat that makes no damn sense: the Redskins defense has scored touchdowns in three games this season. Amazingly, Washington has lost all three of those games.

4. “Exit Strategy Of A Wrecking Ball” by Diablo Swing Orchestra

When it comes to rookie running back Alfred Morris, I really should just cut and paste the same message each and every week.

He runs hard. He loves running over defenders. The first guy to get to him rarely ever brings him down. He gets better each and every week.

For the second week in a row, Morris picked up 100 yards on the ground. He carried the ball just 18 times for 115 yards (6.4 yards per carry) and also contributed a 20-yard reception on the day.

Seriously, what else can you say about the guy? He’s good.

“I’ve said that from day one – he’s got all the things that you look for in a running back,” Shanahan said. “He’s tough, he’s hard-nosed. He’s a first-, second-, third-down back. He doesn’t seem to get tired. He’ll make the first person miss and just keeps on getting better and better.”

I really hope Redskins kicker Billy Cundiff is only renting his place in Ashburn. The way dude keeps missing chip-shot attempts it’s clear he’s not going to be around much longer.