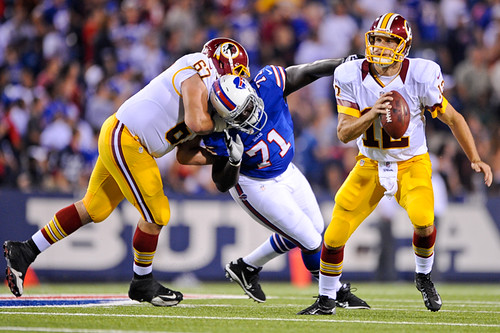 [Editor’s note: This season, the Washington Redskins have asked my brother, Joel Murphy, and I to occasionally write feature stories for the team’s official website, Redskins.com. This article, which was written by Joel is our first contribution, so please check it out.]

For most NFL rookies, draft day is both an exciting and nerve-racking experience. But for Redskins rookie Josh LeRibeus, it was also a confusing one.

There he was on day two of this year’s draft, hoping to get picked up by a team and worried no one would select him until the third and final day. Then, during the third round, the phone rings, answering his prayers. His wait is over, and he’s going to be drafted earlier than he expected. The voice on the other end tells him: “Josh, just hang on the phone, we’re going to have coach talk to you.”

There was just one problem – he didn’t know which coach. In all of the excitement and confusion, he didn’t actually know what team was drafting him.

“I look right up as I answer the phone and the Buffalo Bills, they have their pick coming up,” said LeRibeus. “It just switched to Buffalo. I’m like, ‘Oh [shoot]!’”

Outside of being a big fan of Buffalo wings, LeRibeus didn’t know much about that part of the country. However, having grown up a Denver Broncos fan, he was thrilled to learn he’d been selected by Mike Shanahan. Prior to that phone call, LeRibeus didn’t even know Washington was interested in him, though he would later find out they had talked to his coach at Southern Methodist the day before the draft.

In his excitement over getting drafted, the rookie dropped some colorful language twice in a televised interview. And even though he dropped more language in this interview recounting his draft day experience, swearing is something he’s trying to stop doing since that infamous interview.

“I’ve caught myself for the most part,” said LeRibeus. “The ‘Sugar Honey Ice Tea’ word comes out now and then. I try to refrain from the f-bomb. I catch myself with the f-bomb almost every time now.”

You can forgive LeRibeus for getting a little overexcited. After all, even though he’s played football all his life and he weighed in at a robust 50 pounds on his second birthday, he didn’t think he’d end up in the NFL.

Growing up in Clute, Texas, the “mosquito capital of the world,” football was always a big part of LeRibeus’ life, but he didn’t think he’d make it to the highest level. Even when he was recruited by SMU and other noteworthy programs like Baylor, Boston College and Stanford showed interest, he still thought he’d graduate college with a degree in sociology and would go on to coach high school football somewhere in Texas.

“I knew I had some talent. To be honest with you, it never sunk in until my senior year of college at SMU,” LeRibeus said.