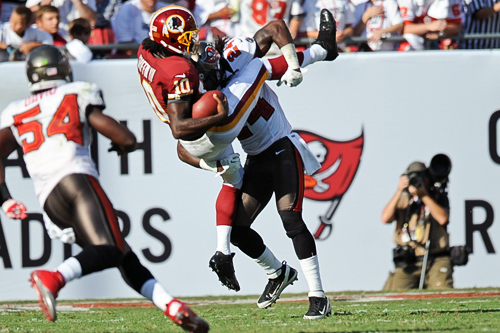 Something occurred to me as I was shooting photos on the sidelines during the Washington Redskins game against the Tampa Bay Buccaneers.

It happened right around the time Tampa Bay safety Mark Barron tried to go all WWE on quarterback Robert Griffin III during Washington’s first offensive play of the second quarter and then again one quarter later when the Buccaneers defense was whistled for roughing the passer after Griffin threw an incomplete pass on 3rd-and-19 from his own 1-yard line.

That’s when I realized that RGIII has officially arrived — as in, the officials have taken notice.

Keep in mind that, thanks to the salary dispute between the NFL and the game officials, this was the first game of the season the Redskins have not had to deal with replacement referees. After the St. Louis game, Griffin let it be known that he wasn’t exactly thrilled with how some of the Rams players carried themselves during the game.

“They were doing a lot of dirty things,” he said. “I still think they have an extremely good team. That doesn’t take anything away from them. But the game was unprofessional. Who am I to talk? I’ve barely been a pro for very long, but from what I experienced against the Saints to that game, it was definitely unprofessional, and it does need to be cleaned up.”

Griffin even suggested some of the Rams players were telling him they were specifically targeting him.

“They made it a point, obviously all week, to hit me,” he said. “Some of the shots were cheap and of that nature. It’s nothing I could control. Teams are going to try to hit me because they don’t think I can take a hit. I think I proved that over my career that I can, so it’s football. I remember one play, after the play, the guy said: ‘We’re going to hit you every play.’ I said, ‘Isn’t this football?’ It’s nothing that I’m not used to. It was extremely weird the way they went about it, though.”

Fast forward just two weeks and, with the replacement referees no longer in the picture, it was crystal clear that the qualified game officials view the Heisman Trophy winner differently. These two calls against the Buccaneers defense showed me that, even though he’s only been a professional football player for a month now, Griffin is already being given the Tom Brady treatment.

The league clearly feels like they have a star with RGIII, so they’re wisely going to protect their asset from future cheapshots and shenanigans. They’re not going to let things get out of control like they did in St. Louis. They recognize what they have in Griffin and apparently have no issue giving him the star treatment.

Coming into the season I would have thought the league — referees included — would have made Griffin pay his dues a little bit before elevating him to that stature, but if it’s already happening, who am I to complain?