what defensive players think about griffin 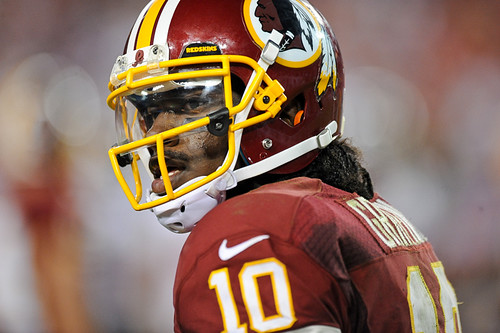 Even though the Washington Redskins’ defense made things much tougher than they needed to by blowing a 21-3 lead against the Tampa Bay Buccaneers, there is a bit of a silver lining to their latest collapse.

Thanks to the failings of the team’s underwhelming secondary, ‘Skins fans were treated to the first come-from-behind victory by rookie quarterback Robert Griffin III, who led the Redskins on a seven-play, 61-yard drive in just 102 seconds to set up the game-winning field goal.

For better or worse, their inability to close out a vulnerable opponent paved the way to what very well might be the first of many “Did you just see that?” moments involving the new face of the franchise and enabled the youngster to do something in a burgundy and gold jersey that hadn’t been done in quite some time.

Consider this: the last time the Redskins scored to come from behind and win a game in the last 10 seconds of a game was on Oct. 3, 1999. It’s also worth noting that the fourth-quarter comeback was the Redskins’ first by a rookie quarterback since Jason Campbell against the Carolina Panthers back on Nov. 26, 2006.

So while it would have been much more enjoyable to watch Washington cruise to an easy victory over a rebuilding franchise, it was nice to see Griffin rise to the occasion when the game was on the line.

“First off, I thought he played his best game of the year,” said head coach Mike Shanahan. “I thought he handled himself extremely well. [He] made some plays that you always want a quarterback to make. A lot of times, they can’t make those plays this early in their career. I’m talking about the two-minute drive, some play action passes, quarterback keeps that I thought were exceptional.”

As if that wasn’t good enough, then word comes out that Griffin’s headset wasn’t working during the team’s final drive of the game. Just when you think the kid can’t get any more impressive, he’s forced to call his own plays during the most pivotal portion of just his fourth-career start.

“We kind of end practice on Fridays with Robert taking the team down in a two-minute drill,” Shanahan said. “We’ve done it in camp. But to actually [have it] happen in a game and keep your poise, especially as young as he is, is really a credit to Robert. We can signal in most of the plays. There was the second time, or the second play, Robert called a play on his own. Then, we came back and we signaled in a play. That’s when he scrambled out. That play was covered and he made a big play on the sideline.”

Guys like Aaron Rodgers and Mike Vick have the uncanny ability to extend plays to by receivers extra time to get open or to keep defenses on their heels because they’re capable of moving the chains through the air or on the ground.

This, of course, is what stands out most while watching Griffin in action through his first month of NFL games. Not only is he completing 69.4 percent of his passes, but he’s also willing and able to tuck the ball and run when the situation calls for it.

That’s why it’s entirely possible that Griffin could throw for 4,000 yards and rush for 1,000 yards in his rookie campaign. If his target gets open — like Santana Moss and Fred Davis were able to do on the first two plays of the two-minute drill against Tampa — he has no problem hitting them in stride. If no one is open, RGIII simply tucks the ball and runs with his world-class sprinter speed.

“There were guys open seemingly all over the field,” linebacker Ryan Kerrigan said of Washington’s game-winning drive. “It was awesome to see. It was such a thrill to see. Any time a quarterback can run, it’s a nightmare for a defense. I can only imagine what the Buccaneers were thinking when they have to drop back and cover all of our really good receivers and then No. 10 takes off running again. He presents a great challenge for defenses.”

Think about it from the opposing defense’s point of view. You’re top priority is making sure Washington can’t beat you with a deep ball and you’re also trying to protect the sidelines to keep whoever has the ball from being able to get out of bounds and stop the clock. The Redskins snap the ball, you’ve got everyone covered and then Griffin uses his amazing speed and athleticism to gash the heart of your defense for a huge 15-yard gain.

“It’s one of the most difficult things to defend against,” said middle linebacker Perry Riley. “The quarterback is the extra man. He’s not accounted for. You have safeties over the top in zones or when you’re playing Cover-2, but you can’t really do that when you play against a running quarterback. You have to have a spy or you risk giving up long runs. It definitely takes a man out of coverage when you play against a running quarterback.”

It’s got to be absolutely demoralizing to do everything you can and still not be able to prevent a rookie quarterback from moving the chains at will.

“He’s athletic, he can move and he’s very accurate, so there’s a lot of stuff you have to account for,” said defensive end Stephen Bowen. “It’s such an advantage for us because there are so many things you have to worry about with Griffin. I’m just glad he’s on our side.”

That’s the same sentiment his offensive teammates say they feel when they take the field with Griffin with the game on the line.

“We have a lot of faith in him, man,” said tight end Fred Davis. “He’s a guy with character. He’s out there getting hit with these tough hits and he’s still out there running around and making plays.

That final game-winning drive showed a side of football that is rarely associated with Redskins football — a pick your poison mentality. If you leave a receiver open, Griffin will pick you apart. If you cover everyone and leave him just a sliver of open space, he’ll take off and pick up the first down with his feet.

Out of everything that’s transpired over the first month of the season, that’s what is most encouraging about the long-term prospects of this franchise. As long as Griffin is healthy, this team appears like it’s going to have a chance to win each and every Sunday.