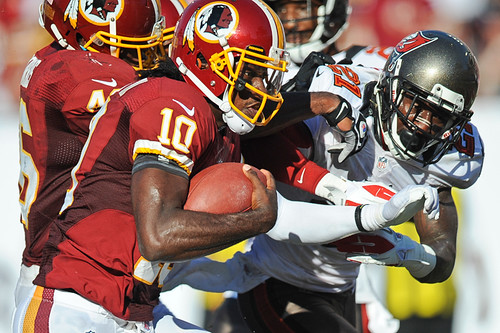 Since the day the Washington Redskins traded away multiple draft picks to the St. Louis Rams for the chance to select Heisman Trophy winner Robert Griffin III, expectations have been sky high for the rookie quarterback.

It’s been so long since a worthwhile quarterback donned the burgundy and gold that, fair or unfair, anything less than restoring glory to a once-proud franchise has to be considered a failure when it comes to Griffin’s role in Washington.

And yet, the more he’s asked to do, the more RGIII continues to deliver.

This week, Griffin was asked to put the entire team on his back and snatch victory back from the jaws of defeat as he took the field with just 102 seconds remaining.

Even though his headset went out, which meant he had to call his own plays with the game on the line, Griffin looked to be in complete control as he dropped back and found receiver Santana Moss for a 15-yard gain to get the drive going. Before the Buccaneers recovered, RGIII found tight end Fred Davis for another 20-yard gain.

When everyone was covered two plays later, Griffin simply tucked the ball and scrambled for another 15 yards. After quickly spiking the ball to stop the clock, Griffin strolled off the field with just seconds left on the clock after having orchestrated a clinical seven-play, 56-yard drive that put kicker Billy Cundiff in position to kick a game-winning 41-yard field goal to give Washington a thrilling 24-22 victory.

For the game, Griffin completed 26 of 35 passes for 323 yards with a rushing touchdown and a quarterback rating of 102.4. Oh, and he also established career highs in pass completions, pass attempts and passing yardage.

Not bad for a rookie making only his fourth career start.

Of course, none of Griffin’s final-drive heroics would have been necessary had Cundiff been able to convert any of his first three attempts.

Cundiff, who prior to joining the Redskins was last seen missing a 37-yard field goal that ultimately cost the Baltimore Ravens a chance to go to the Super Bowl last season, failed to convert from 57, 41 and 31 yards against Tampa Bay.

And yet, his teammates still remained convinced the veteran would deliver when it counted most.

That’s probably because, if he did miss it, Cundiff would have likely been cut before he even had the chance to board the team’s flight back to Washington. Fortunately for everyone involved, it didn’t have to come to that.

Of course, Cundiff’s failed field goal attempts wouldn’t have been such an issue had the defense put together a full 60-minute effort for the first time in 2012.

Week after week, Griffin and the rest of Redskins offense put points on the board with ease and week after week, the defense finds new and creative ways to utterly collapse at the worst possible time.

With Washington leading comfortably by a score of 21-6 midway through the third quarter, the Redskins defense once again fell asleep at the wheel and let Tampa’s terrible offense believe they were capable of competing.

Even though the Buccaneers had become completely one dimensional after abandoning the ground game, the Redskins were still unable to close out what should have been an easy game against a rebuilding franchise.

But then Tampa quarterback Josh Freeman connected on a 65-yard bomb to receiver Mike Williams and, all of the sudden, the Buccaneers pitiful offense came to life. Williams finished the game with four catches for 115 yards and fellow wideout Vincent Jackson contributed six catches for 100 yards and a touchdown.

That’s noteworthy because the last time Tampa Bay had two wideouts finish a game with at least 100 receiving yards was back in 1992. And in addition to Williams’ 65-yard reception, Jackson added a 54-yard reception — both of which represent the two biggest plays the Buccaneers offense has produced this season.

Over the final quarter and a half, Freeman had little trouble picking apart Washington’s awful secondary — completing nine of 12 passes for 184 yards with a touchdown as Tampa Bay erased a 15-point deficit and took a 22-21 lead with less than two minutes remaining in regulation.

4. “Dog Days Are Over” by Florence + The Machine

The Buccaneers entered the game with the league’s best rushing defense, having surrendered an average of just 47.3 yards per game through the first three weeks of the season.

And then they met Alfred Morris, who posted a career day at Raymond James Stadium.

Playing in front of many of his friends and family members who made the trip from Pensicola, Florida to see the rookie running back, Morris rushed 21 times for a career-best 113 yards and a touchdown to further solidify his role as the team’s primary back.

Thanks largely to Morris’ impressive 39-yard touchdown run, the Redskins ground attack finished the day with 160 rushing yards, which means the team has racked up at least 150 yards on the ground every game this season.

So while it must be killing head coach Mike Shanahan to not be able to torment fantasy football players by shuffling his running backs on a weekly basis, it appears that Morris is going to continue to carry the load in Washington for the foreseeable future.

While it was incredibly satisfying to see Griffin and friends actually put together a two-minute drill with such efficiency, that methodical drive did rob ‘Skins fans of one highly-anticipated moment.

Because of the way the game ended, there was no chance to see if Bucs coach Greg Schiano was once again going to send his attack dogs out to try and start a fight as the opposing team lined up in a victory formation.

Sure, this ending ensured RGIII left the field without further chance of injury, but the first-year coach’s desire to piss on conventional NFL coaching wisdom is amusing. Missing out on that drama is about the only sad part to the day’s otherwise happy ending.