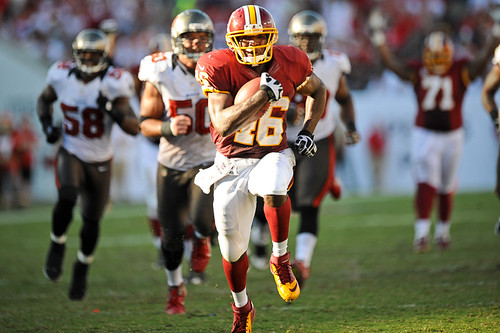 Nothing is ever easy for the Washington Redskins.

How else do you explain two players — receiver Aldrick Robinson and safety Brandon Meriweather — being lost for the game thanks to a freak collision during warmups?

Things only got more bizarre once the actual game started, as the Redskins raced out to a commanding 21-3 lead over the Tampa Bay Buccaneers, only to watch that lead evaporate as the defense once again forgot how to stop anyone.

And let’s not forget the improbable hero of the game, kicker Billy Cundiff, who missed three field goals during the course of the game before nailing the game winner with three seconds left in the game.

It was thrilling. It was maddening. But most of all, it was Redskins football.

So please take a moment to savior the team’s come-from-behind-after-blowing-the-lead victory by checking out my favorite photos I was able to capture from the sidelines of Raymond James Stadium.