just how bad is the redskins defense? 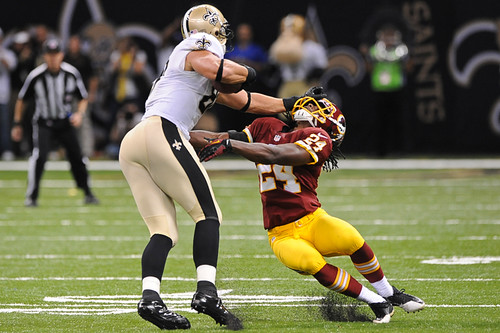 Even though we’re only three weeks in, it’s already safe to say the 2012 season has been an interesting one for the Washington Redskins.

Before the season began, most of the so-called experts thought the Redskins defense would be the strength of the team while the offense was more likely to take some time to get their act together.

They also suggested Washington would lose to a motivated New Orleans Saints squad in the season opener, before rebounding with wins over the rebuilding St. Louis Rams and good, but not great Cincinnati Bengals.

So basically, everything they thought they knew about this franchise heading into the season has already been proven dead wrong.

Washington’s revamped offense has been electric from the first time rookie quarterback Robert Griffin III took the field down in the Big Easy and the defense has been a huge liability. And, of course, the high-powered Redskins rolled past the Saints and then fell flat against the Rams and Bengals.

Through three games, the offense has scored 99 points. Even though the offensive line has struggled at times to protect the new face of the franchise and the team’s top receiver has played in just one out of 12 quarters this season, the Redskins continue to march up and down the field with ease.

But it’s the defense that is truly the cause of concern these days — specifically Washington’s inability to stop or even slow down an opposing team’s aerial assault that is the most alarming development of ’12.

That works out to 977 passing yards with nine touchdowns and four interceptions or to put it another way, here’s what an average day against the Redskins defense works out to:

Whoever lines up at quarterback against Washington completes 23 of 38 attempts (60 percent) for 325 yards with three touchdowns and one interception for a 99.9 quarterback rating.

*Keep in mind, this doesn’t even count the 73-yard touchdown thrown by Bengals receiver Mohamed Sanu. When I went to add in that touchdown as well, I began to sob uncontrollably.

Taking a deeper look, here’s what the opposition has been able to do against this pitiful secondary:

The New Orleans Saints had 10 plays of 17 yards or more — all of which came via the passing game. Six of those plays were for 20 yards or more — including touchdowns of 33 and 20 yards.

The St. Louis Rams had 10 plays of 15 yards or more — with nine of the 10 plays coming via the passing game. Again, six of those plays were for 20 yards or more — including a 34-yard touchdown pass.

The saddest part is, teams are basically saying “we know you’re not capable of stopping us, so we’re just going to do the same thing over and over,” and it’s working. Consider this:

New Orleans’ top receiver was Lance Moore, who had six catches for 120 yards and a touchdown.

St. Louis’ top receiver was Danny Amendola, who had 15 catches for 160 yards and a touchdown.

Cincinnati’s top receiver was A.J. Green, who had nine catches for 183 yards and a touchdown.

Honestly, why waste trick plays against Washington’s substandard secondary when you can just go vanilla and still score 30 points with ease? Since head coach Mike Shanahan came to town, the bulk of the franchise’s resources have been directly at the defense.

Whether by free agency or in the draft, the team has aggressively sought to stockpile talent on the defensive side of the ball, and yet, they look completely lost on Sundays. Even if they’re only rumors right now, it’s only a matter of time before defensive coorinator Jim Haslett is put on notice.

“I’m disappointed in the pass game because we are giving up too many yards,” Haslett said. “I think we’ve just got to clean up what we’re doing in the back end. We’ll get better in that area. These guys take pride in what they’re doing. They’ll be better. If we have to, we can go to a different type of format.”

The Redskins currently have the 28th-ranked defense overall and the 29th-ranked pass defense, but those numbers are deceiving. Baltimore and Cleveland both rank below Washington, but they’ve already played their Week 4 game. Basically, the defense is terrible and the pass defense is even worse.

“We’ve got to play with better technique, number one. It’d be good to get guys healthy, get some guys back. But the main thing is to just play with technique,” Haslett said. “We gave up three big plays against Cincinnati. One on the Wildcat, we didn’t get lined up right and the receiver is covered and [we] missed a tackle and the young guy who gets beat down the middle of the field is covered, too, which is something we talked about.”

Sure, it’s nice to go to sleep at night telling yourself that all this defense is missing is a healthy Brandon Merriweather at safety, but the last time I checked, he was the same guy who couldn’t cut it in New England or Chicago. He might be an upgrade over a youngster like DeJon Gomes, but he’s far from perfect.

Regardless of whether Merriweather plays this weekend or not, even Haslett admits Washington’s defense needs to get back to basics.