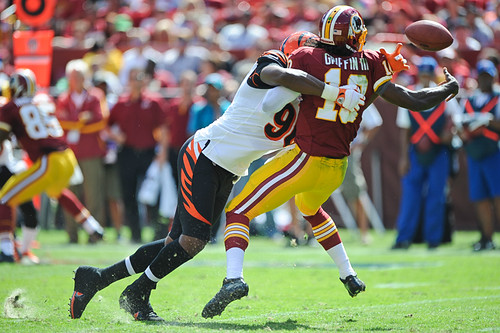 These are strange times for the Washington Redskins.

For years, the defense has been asked to shoulder the load and keep the team in games while the offense struggled to put points on the board consistently.

This year though, everything about the burgundy and gold is radically different.

The offense, for the first time under Mike Shanahan, has the ability to move the ball on the ground or in the air and finishes drives with touchdowns rather than lengthy field goal attempts, while the defense just can’t seem to get the job done on a weekly basis.

Through three games, the Redskins have amassed 99 points — to put that in proper perspective, that’s three more points than Washington scored in their first five games on 2011.

With Robert Griffin III behind center, the Redskins finally have a dynamic offense with the ability to score more than 16 points a game for the first time in recent history. Not only that, but they have the second-best ground game (averaging 180.7 yards per game) and the sixth-best offense in football (404.3 yards per game).

Unfortunately though, not everything on the offensive side of the ball is perfect these days.

Anyone who watched the Bengals game this past weekend has to be concerned with the number of times the opposition was able to dish out punishing hits on RGIII.

Unofficially, Cincinnati hit Griffin a stunning 28 times during Washington’s 74 offensive snaps. In other words, 37 percent of the time the Redskins ran a play, the opposition hit their starting quarterback.

I’m not an expert, but I feel like if the opposing team is able to hit your most important player once every three plays you run, you’re probably doing it wrong.

“If guys get a chance to hit your quarterback – whoever the quarterback is – they’re going to,” said Kyle Shanahan. “When a guy has that ball in his hands a little bit more and he’s running a little bit more, they’re going to take some shots. Guys are going to always try to get as good of a shot as they can. It’s a good thing he has the athletic ability to get out of the way most the time.”

It doesn’t matter who a team has playing quarterback, no one can survive that many hits on a weekly basis.

“One is too many, to be honest,” said Griffin. “I’m not trying to be funny. As a quarterback, you’re a stationary target most of the time. Even when you’re a mobile QB, the teams are still going to come after you even more because they feel like if they get a sack on a mobile quarterback, it counts as more. That’s just their mindset when they go into the game. Like I said, one is too many, but the one thing I won’t do personally is quit or play scared. I’ve never played scared in my life so it doesn’t matter how many times I get hit. I’m going to continue to get back up. Even if they have to cart me off the field, I’m going to get off that cart and walk away.”

For the year, Griffin has been sacked nine times in three games, including six against the Bengals last week. Here’s a deeper look at how the offensive line has fared thus far:

During the season opener in New Orleans, the offensive line gave up two sacks and eight pressures. One week later, Washington only gave up one sack, but the Rams still did a good job of getting to Griffin on a consistent basis thanks to right tackle Tyler Polumbus, who gave up a mind-numbing seven hurries against St. Louis.

And then things went from bad to worse against Cincinnati. Washington’s offensive line has one elite player — left tackle Trent Williams. Once he left the game with a knee injury though, the Redskins offensive line struggled to give Griffin time to make a play.

Williams’ replacement, Jordan Black — who I’m not sure is good enough to be on an NFL roster — gave up two sacks and three more knockdowns in just 39 pass blocking snaps. And for the second week in a row, Polumbus failed to get the job done — surrendering two knockdowns and four more pressures.

It goes without saying that a team with under-performing tackles on both sides of the line is playing with fire, which is why everyone involved better hope and pray that Williams’ bone bruise doesn’t keep him out of the lineup very long.

“That’s my guy. I’ve only been here for a little bit, but Trent is my guy and I don’t want any of my guys to get hurt,” Griffin said. “So it is very unfortunate and sad. He actually came back out on the field and played a little bit for us, which shows you how tough he is. We don’t know what the injury is. Hopefully it is nothing too serious. It’s the National Football League, there’s a lot of guys out there that can play, but you can’t replace Trent Williams.”

Of course, if we’re talking about injuries, then we have to mention right tackle Jammal Brown, who apparently has the right hip of a senior citizen.

In 2009, Brown had surgery to repair a torn labrum in his right hip, and yet, he’s still never fully recovered from that injury.

This season, Brown has been a ghost. Even though he received multiple cortizone injections, he still wasn’t able to participate in training camp or preseason and he currently resides on the team’s physically unable to perform list — which at this point could probably be renamed in his honor.

Brown can’t come off the PUP list until after the team’s first six games of the season. Will he actually be ready to go by then? Honestly, I don’t even think he knows at this point.

With a healthy Brown and Williams at tackle, the coaching staff can feel pretty confident about keeping Griffin’s jersey clean. Without them though, the chances of the new face of the franchise actually having to be carted off the field greatly increases.

Much like the debate involving the Washington Nationals’ decision to shut down phenom Stephen Strasburg, everyone’s got an opinion on just how much punishment the coaching staff is letting Griffin take. Reasonable human beings can’t help but think it’s only a matter of time before RGIII takes a hit he can’t recover from. And yet, the coaching staff doesn’t seem overly concerned.

“I don’t think you count it by numbers,” said Kyle Shanahan. “I think quarterbacks take the worst hits usually when they’re in the pocket waiting to throw the ball. I think at least when he’s running with it, he has an idea of where it’s coming from. His eyes are on people. Not all quarterbacks have the ability to get out of the way, but he does. I think he’s done a good job of not taking too many big hits. I think that’s a week-to-week basis. You have to keep him healthy. It’s how he feels and what he can handle. He’s done a great job with it so far.”

Okay, quarterbacks on teams playing catchup take more hits than teams with the lead. That makes sense. But Griffin is taking those hits (because his defense is pitiful) and he’s also getting knocked around on running plays because Washington is currently running an option offense.

Griffin has more rushing attempts than any other quarterback in football. Do they have an idea of how many carries is too many for him?

“I don’t know. This is our first time going through it, too,” Kyle Shanahan said. “We’re kind of learning as we go also. You never go into a game planning for him to carry the ball all the time. Usually, when the defense covers everyone else, he has to be a threat and pull it away and go run with it. You hope you’re not calling too many plays where he’s running it versus every single look. You just hope he’s only running it versus premier looks. When you do it that way, he usually has a chance to get some yards before he can go down. He’s not just running power up in there by himself, just butting heads with everybody – usually just trying to race people to the sidelines.”

The Redskins trailed the Bengals 24-7 before Griffin was able to get things going able eventually tie the game up at 24-24. Through the air and on the ground, RGIII showed just how talented he was as he willed his team back into a game that they probably should have been blown out of — judging by how poorly the team performed on both sides of the ball in the first half.

“He made some big plays at the end that a lot of people can’t make,” said head coach Mike Shanahan. “He’s going to keep on getting better and better as time goes on. To see his competitiveness and getting knocked down and getting back up and competing, that’s what you want to see. That’s what the great ones do. I was really proud of the way he handled himself.”

Yes, Griffin is going to get better as time goes on and he continues to get more comfortable in this system, but that only happens if he remains healthy.

Ideally, the Redskins would have both of their preferred starting tackles available each and every week. But if that’s not possible, then it falls on the coaches to scheme up better ways to keep defenses from teeing off on their franchise player. Otherwise, it’s only a matter of time before Griffin isn’t able to get back up after taking one too many hits.