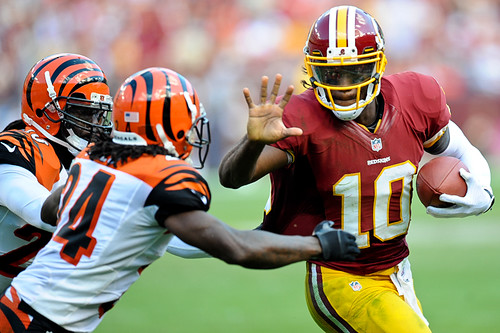 1. “Guilty Pleasure” by Gone For Days

It’s hard to describe just how excited fans of the Washington Redskins were in the hours leading up to the home debut of rookie quarterback Robert Griffin III.

The parking lots at the stadium were buzzing with anticipation as giddy burgundy and gold-clad fans counted down the minutes until the doors opened and they were able to see their franchise quarterback take the field for the first regular season game at FedEx Field.

The stadium was electric when Griffin’s name was called during pre-game introductions and the new face of the franchise took the field. It was as if 20 years of pitiful quarterback play in our nation’s capital was forgotten in an instant.

For the first time in a long, long time, the Redskins truly have an elite talent — someone opposing teams losing sleep over.

It’s only been three games, but Griffin continues to show he can move the chains with ease with his arm or his feet. His supporting cast is still very much a work in progress, but that hasn’t stopped RGIII from putting points on the board on a regular basis.

Through three games, Washington’s offense is averaging 33 points and 404 yards per game — which is a stark contrast to just last season when Rex Grossman and John Beck were prominently involved.

Even when the Redskins find themselves down by 17, as they were during the second quarter against Cincinnati, this offense is still potent enough to mount a comeback in no time.

With 3:13 left in the first half, Bengals running back BenJarvus Green-Ellis scored on a one-yard touchdown run to give his team a 24-7 lead.

And yet, the Redskins tied the game 24-24 with 3:26 left in the third quarter, thanks to Griffin’s three-yard touchdown pass to receiver Santana Moss.

Even if Washington’s comeback bid ultimately fell short, as they dropped to 1-2 on the year after losing to the Bengals 38-31, Griffin has given ‘Skins fans plenty of reason for excitement.

2. “Under The Gun” by Electric Guest

Cincinnati sacked RGIII six times and hurried him countless others, in hopes of limiting the rookie’s impact. Well, it worked.

Bengals defensive end Michael Johnson had the first three-sack game of his career, thanks to Washington’s awful showing on the offensive line. He spent so much time harassing RGIII in the backfield that his teammates joked it might have a lasting impact on Griffin.

“When he goes to the bathroom tonight, he’s going to see Mike Johnson right behind him,” said Bengals defensive end Carlos Dunlap.

For as great as Griffin has been thus far, the question continues to be how long can he survive if he take this level of punishment on a weekly basis.

“One is too many, to be honest,” Griffin said. “I’m not trying to be funny. As a quarterback, you’re a stationary target most of the time. Even when you’re a mobile QB, the teams are still going to come after you even more because they feel like if they get a sack on a mobile quarterback, it counts as more. That’s just their mindset when they go into the game. Like I said, one is too many, but the one thing I won’t do personally is quit or play scared. I’ve never played scared in my life so it doesn’t matter how many times I get hit. I’m going to continue to get back up. Even if they have to cart me off the field, I’m going to get off that cart and walk away.”

3. “Every Day Is Exactly The Same” by Nine Inch Nails

There’s no denying it — the Redskins defense is atrocious. And it took exactly one play — a 73-yard touchdown pass from receiver Mohamed Sanu to wide out A.J. Green — for the Bengals to take advantage of Washington’s porous defense.

From that point on, Cincinnati (with good reason) believed they could gash the Redskins defense for large chunks at a time. In related news, Washington’s defense surrendered seven plays of 20 yards or more — including touchdowns of 73, 59 and 48 yards.

It’s amazing when you stop and think about it — last week, defensive coordinator Jim Haslett’s unit had three turnovers, two sacks and a defensive touchdown and no one cared because they got torched by the decidedly-mediocre St. Louis Rams for 31 points and 452 yards of total offense.

One week later, it was more of the same as the Redskins created two turnovers, registered two sacks and scored yet another defensive touchdown and once again, it doesn’t matter because the Bengals racked up 38 points and 478 yards of total offense.

Through three games this season, the Redskins defense 1,288 yards and 101 points, which averages out to 429 yards and 33 points allowed per contest.

And it’s not like this came out of nowhere. In fact, the Redskins defense has allowed 30 points or more in seven of the last eight games (dating back to last season).

Since last December, Washington’s defense has given up 246 points over what works out to a half of an NFL season. Double that and you’re looking at 492 points (which is only two points less than Tampa Bay’s 32nd ranked defense allowed in ’11).

In other words, over the last eight games, the Redskins defense has been as bad as any unit in football. It’s not going to matter how much better RGIII and the offense are, if the defense can’t find a way to slow down the opposition.

“It’s disappointing,” Shanahan said. “I thought the defense was going to be the strength of our football team.”

Every team deals with injuries during the course of an NFL season, but it sure seems like the Redskins have already been dealt more than their fair share.

On the defensive side of the ball, they are without the services of outside linebacker Brian Orakpo (left pectoral), defensive end Adam Carriker (quadriceps), safety Brandon Meriweather (knee), safety Tanard Jackson (suspension) and cornerback Cedric Griffin (hamstring).

On offense, they’ve been without right tackle Jammal Brown (hip) since the season started and now left tackle Trent Williams (knee) might be out of action for a while. Needless to say, this season could get even uglier if other players don’t step up and fill the void with so many regular contributors out of action.

5. “At Home” by Crystal Fighters

The Redskins have now lost an amazing seven-straight home games and are just 4-13 at FedEx Field under Shanahan. In case you were wondering, that’s the longest current home losing streak in the NFL.

Seriously, at what point should we petition the league to let the team play their home games anywhere other than FedEx Field?