photos from the sidelines: week 3 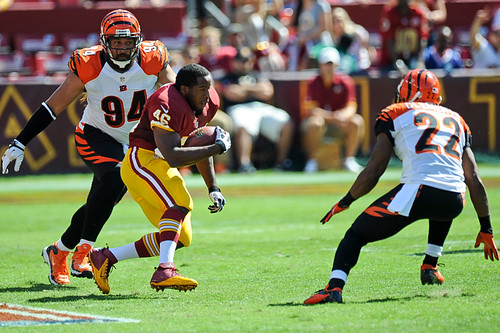 After years of the Washington Redskins defense being asked to carry the load while the offense struggled with consistency, this is definitely the dawn of a new day on both sides of the ball.

By simply adding competent quarterback play, the offense magically appears to have learned that NFL teams are allowed to score more than 16 points per game. Meanwhile, the usually-stout defense doesn’t appear capable of stopping anyone from marching up and down the field.

The Redskins suspected they were getting a franchise quarterback in Heisman trophy winner Robert Griffin III, but Washington’s defense has been so pitiful so far that it looks as though RGIII brought the Baylor defense with him to the pros.

That, my friends, is how the Redskins can score 99 points in three games and still be in last place in the NFC East with a 1-2 record. But before you purge Sunday’s disappointing home opener completely from your memory bank, please take a minute to check out my favorite photos I was able to capture from the sidelines.

Don’t do it for me. Do it for running back Alfred Morris, who wanted to impress you so badly that he gave up on wearing a helmet just to see if you were paying attention.