just how bad are the special teams? 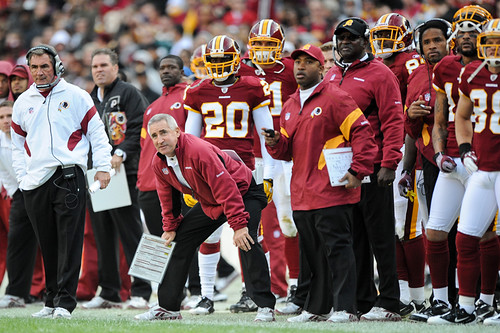 For years now, the talented folks over at Football Outsiders have taken number crunching to another level.

Rather than simply looking at someone’s quarterback rating or how many yards per carry a running back gets over the course of a season, they dig deeper into every aspect of football to truly give fans a real indication of what areas a team excels in and where teams struggle.

Their go-to advanced statistic is something they call DVOA, or defense-adjusted value over average. As their website explains, DVOA is a method of evaluating teams, units, or players. It takes every single play during the NFL season and compares each one to a league-average baseline based on situation.

That’s what DVOA is all about.

The reason I bring all of this up is to help give proper context when looking at Washington’s special teams unit. Sure, ‘Skins fans are understandably frustrated after seeing Washington punts blocked in back-to-back weeks, but I wanted to know just how concerned the local fanbase should be moving forward.

When it comes to this particular aspect of the game, the Football Outsiders analyze how many points, compared to league average, each team receives from the five elements of special teams: field goals/extra points, kickoffs, kick returns, punts, punt returns. The total is then converted into a DVOA percentage so that it can be added in to offense and defense to create total team DVOA.

Since this Smith’s ninth season in Washington, I wanted to go back and see how his special teams units have fared during that time frame. Here’s a look at where the Redskins special teams have ranked in weighted DVOA since 2004:

To recap, advanced stats show us that Smith’s area of expertise has ranked in the top 10 just once since he came to Washington, but have ranked 22nd or worse four times (including each of the past three seasons).

Through two games this season, the Redskins have had two punts blocked. Mind you, only nine total punts were blocked league-wide in 2011 and no team had more than one blocked all of last season.

Oh, and return specialist Brandon Banks has fumbled a kick or punt return an astounding 10 times in his last 15 games. Even if he’s been able to recover the ball in most instances when he puts the ball on the ground, shouldn’t someone duck tape a football to Banks’ tiny hands until he learns one of the basic principles of football? Or better yet, shouldn’t a player’s roster spot be in jeopardy when he continues to play with fire each and every time he steps onto the field?

Look, I don’t want to pile on, but when it comes to special teams, it doesn’t appear to matter what area you focus on or what tools you choose to utilize, the Redskins just haven’t been very good under Smith.

Now, through the miracle of the NFL Game Rewind, here’s a screen capture I was able to take of exactly where an otherwise routine punt went horribly wrong. Please notice linebacker Perry Riley, who I’ve highlighted below. 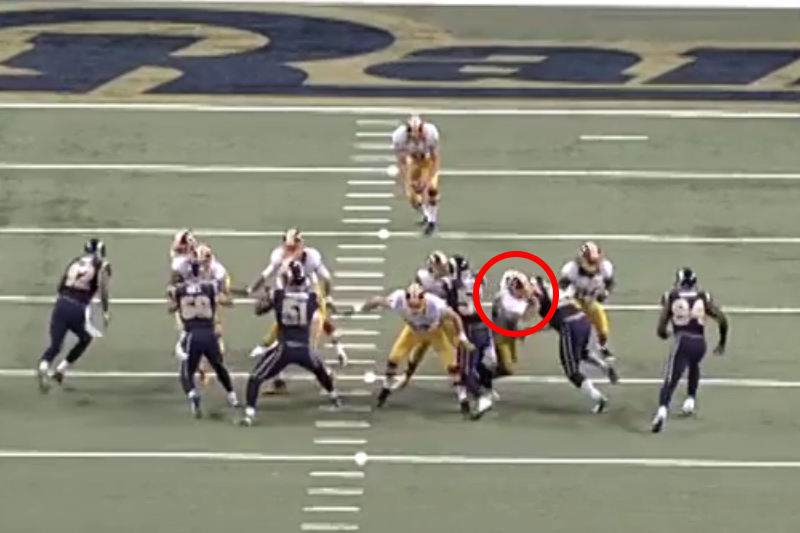 Rather than simply blocking his man so Sav Rocca can punt the ball away safely, Riley seems much more interested in blowing by the opposing player to get downfield. He’s supposed to be the one engaging with the opposition, and yet — for reasons that remain unclear — he’s the one who appears to be fighting through the block.

Of course, the Rams player is more than happy to let Riley sidestep past him because it means he no longer has anyone standing between him and Rocca.

When a team suffers breakdowns and mental lapses on a weekly basis, I tend to believe that’s an indictment on the coach. At least one key special teams player disagrees.

“It’s not a coaching issue,” said linebacker Lorenzo Alexander. “It’s accountability on the players. It’s not executing. It’s just like anything else: If [quarterback] Robert [Griffin III] goes out there and throws an interception, do you blame [offensive coordinator] Kyle [Shanahan] because he threw the interception? If someone goes out there on special teams, misses a block, and he’s being coached, being taught [correctly], do you blame Danny? No.

“Special teams is one of those nuances that people really don’t understand,” he continued. “They just see people flying around. Until you get the nitty-gritty of it and understand everything about special teams, you really can’t appreciate what Danny Smith brings to the table as a coach and a person.”

It’s fair to say ‘Skins fans don’t know every subtle nuance that goes into special teams. Alexander, who is a special teams standout, swears Smith is a quality coach and that should count for something.

But at the end of the day, I can’t help at look at the numbers — both advanced and traditional — and wonder if the Redskins would be better off with someone new calling the shots in this area. With the offense still a work in progress and the defense already decimated by injuries, I just don’t think this team has any margin for error.

For far too long now, when Washington’s special teams unit comes into the spotlight, it’s for all the wrong reasons. I like Smith as a person and wouldn’t be surprised if the team let him go and he succeeded elsewhere. But his body of work over the last eight plus seasons shows me little reason why he should remain prominently involved with such an underwhelming aspect of this rebuilding franchise.