can redskins defense survive the injuries? 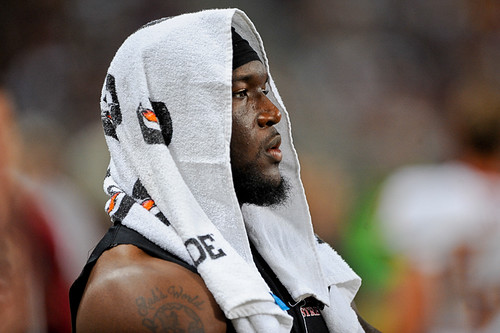 Once upon a time, the Washington Redskins’ defense was considered to be the absolute strength of this franchise. While the offense struggled to consistently put points on the board for much of the last decade, the Redskins defense has typically kept the team in games.

Unfortunately for the guys in burgundy and gold, if the first two games of the 2012 campaign are any indication, this might be a long and painful season for defensive coordinator Jim Haslett’s crew.

Not only were they dealt a humbling 31-28 defeat at the hands of the St. Louis Rams Sunday, but they also suffered season-long injuries to two vital members of the front seven.

Redskins outside linebacker Brian Orakpo tore the pectoral muscle near his left shoulder and defensive end Adam Carriker tore the quad tendon in his right knee against St. Louis, and now both are done for the year.

And now what was once considered the deepest part of this roster is suddenly an area of concern moving forward.

Orakpo is a rarity — he’s a Vinny Cerrato draft pick that actually turned out to be a smart selection. Since coming to Washington with the 13th overall pick in the 2009 draft, Orakpo has picked up 29.5 career sacks.

How good is that? The two-time Pro Bowler trails only Packers linebacker Clay Matthews in that category among players who entered the NFL since ’09.

“He’s a guy that can do it all — he can cover, he can rush, he can play the run, he’s very physical, very smart, he’s a team player — all of the things you look for in a Pro Bowl player,” said head coach Mike Shanahan of Orakpo. “Obviously, we’ll miss him.”

Because Orakpo is such a talented pass rusher, he’s usually the player opposing teams spend the majority of their time game planning for. Even if he doesn’t get a hand on the opposing quarterback, he’s still a factor because of the number of times offensive linemen are whistled for holding calls while trying to slow the University of Texas standout down.

And let’s not forget that with so much attention being focused on Orakpo, that frees up guys like Ryan Kerrigan to make plays on the other side of the field. Now, without Orakpo in the lineup, the Redskins must turn to the unheralded duo of Rob Jackson and Chris Wilson to try and fill the void. 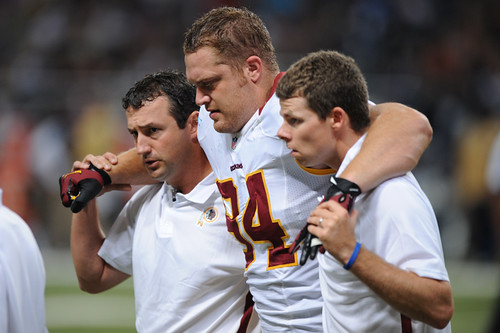 Like Orakpo, Carriker too is a bit of a rarity. While the Redskins are notorious for trading away high draft picks for over-the-hill players who fail to produce, he’s the exact opposite.

Washington landed the 28-year-old in a low-risk, high-reward deal with the Rams that didn’t even cost the team a draft pick. The Redskins acquired Carriker by agreeing to drop down 28 spots in the fifth round of the ’10 draft and he’s been a steal ever since.

While this particular 3-4 scheme is designed to free up linebackers to make plays, Carriker continually found ways to be productive in 2011. Not only is he above average against the run, but Carriker also contributed 5.5 sacks last season.

That’s why the Redskins and Carriker agreed to a four-year, $20-million deal during the offseason. Even though there are half a dozen players on the defensive side of the ball who garner more attention, this coaching staff realized just how much Carriker brings to the table.

Now though, the team must count on defensive end Jarvis Jenkins to step into a larger role. The second-year player looked great during training camp in ’11, but missed all of last season after tearing his ACL during the preseason.

In a perfect world, the Redskins could gradually increase the workload Jenkins takes on this season, as he gets his conditioning back to where it was prior to the injury. Even though he’s cleared to return to action, you know it’s going to take a while to get that strength and explosiveness back in his game, so why try to throw too much on his plate to quickly?

But with Carriker sidelined for the season, that cautious approach is no longer very realistic. Unless I’m mistaken, the 24-year-old will now see his workload increase dramatically and the team can only hope his surgically repaired knee is up to the task.

Regardless of how much Jenkins plays though, this defense is going to need to find a way to save this sinking ship sooner rather than later. Through two games, the Redskins’ defense has allowed 810 yards and 63 points. That places them 28th in yards allowed and 27th in points allowed, respectively.

Without Orakpo and Carriker this past weekend, Washington’s defense seemed incapable of stopping the Rams. Against Detroit in their season opener, the Rams had just 14 points and 250 total yards. Against the Redskins though, they exploded for 31 and 452 yards.

It was so jarring to see such a mediocre offense steamroll a supposed top 10 defense that I actually began to wonder if Kurt Warner and Marshall Faulk had both suited back up for St. Louis. Sure, Sam Bradford was considered the best in the country when he was still in college, but those days have been few and far between since he came to the pro level.

And yet, the Rams had more than 400 yards of offense before the fourth quarter was even underway. Without the benefit of big-name talent (or the services of injured running back Steven Jackson), the Rams had their way with Haslett’s defense.

I’ve said all along that the secondary is an area of concern with this year’s team. During Week 1, the front seven was able to pressure Drew Brees often enough to keep the Saints offense at bay. But against St. Louis — especially once Orakpo and Carriker left the game — Washington rarely made Bradford uncomfortable.

With all the time in the world to make plays, he happily picked apart the team’s zone defense and exposed just how bad things might be if the pass rush isn’t there.

To their credit, the players who remain in the lineup aren’t crying about what could have been.

The home opener against Cincinnati this weekend will give Washington’s defense that first chance to see if anyone can step up and fill the void. If not, the defense better pray that Robert Griffin III and the offense can continue to carry the load. Otherwise, this is going to be a long, long season.