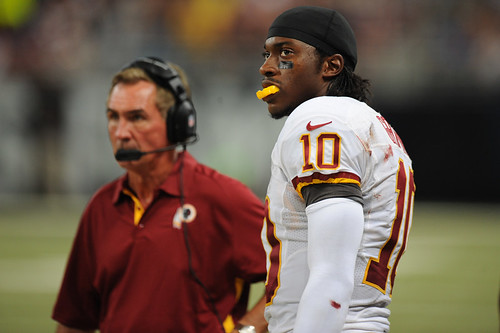 Nothing good comes from playing the St. Louis Rams.

For starters, they’ve been the worst team in football (by a lot) since 2007. If a team like the Washington Redskins defeats them, it’s not particularly newsworthy because the Rams are a doormat. It’s simply considered taking care of business.

But if a team like the Redskins loses to St. Louis, well … that’s just downright embarrassing. I know, because I’ve seen it happen far too often over the last few years.

Even though the Rams have gone just 13-64 against the rest of the NFL since ’07, they’re inexplicably 3-2 against Washington. Their 31-28 victory over the Redskins will not be remembered for anything special they did.

No, the lasting image from this contest will be receiver Joshua Morgan losing his cool at the worst-possible time, drawing a 15-yard penalty for unsportsmanlike conduct for throwing a football at an opponent that essentially ensured the home team won the game.

Even though everyone knows Redskins kicker Billy Cundiff shouldn’t be allowed to attempt field goals of 50 yards or more, Morgan’s foolish penalty forced head coach Mike Shanahan to send his kicker out to try a 63-yarder in hopes of forcing overtime.

Of course, Cundiff missed it badly and the Redskins once again squandered away the chance to build some momentum after a rare quality win.

On the first play of the day, Washington’s defense forced a fumble and scored a touchdown just 11 seconds into the game, thanks to cornerback Josh Wilson’s score.

If that’s not enough, the Redskins defense finished the day with two sacks and three turnovers forced (two fumbles, one interception). And yet, none of that matters because Washington’s defense was so atrociously awful against the Rams that they gave up more than 400 total yards … before the fourth quarter even started.

Last week, ‘Skins fans were willing to live with the 32 points and 358 yards allowed because the New Orleans Saints have been putting up those kind of numbers for years.

But it’s a completely different story when the Redskins defense gets steamrolled by Sty. Louis for 31 points and 452 total yards.

Washington’s defense was so bad, it made Rams quarterback Sam Bradford and someone allegedly named Daryl Richardson look like Kurt Warner and Marshall Faulk during the “greatest show on turf” era.

Through two games, the Redskins defense — which, mind you, was supposed to be the strength of this franchise as the offense slowly adjusted to having a competent quarterback for the first time in recent history — has allowed 63 points and 810 total yards.

So yeah, this might be a good time for defensive coordinator Jim Haslett to get his act together and show that he’s actually capable of coming up with a scheme that slows down opposing offenses. Otherwise, this is going to be a long, long season.

3. “You Ain’t Alone” by Alabama Shakes

In the season opener, Redskins quarterback Robert Griffin III had arguably the best debut in the history of football. He systematically picked apart the Saints and showed that — without a doubt — he’s a game changer at the pro level.

One week later, Griffin was still impressive — even though he played a completely different game against St. Louis. Without the benefit of dependable blocking for his offensive line, RGIII was forced to run for his life early and often Week 2.

Griffin responded by completing 20 of 29 passes for 206 yards with a touchdown and an interception. He also dazzled those in attendance by rushing for 82 yards and two touchdowns on the ground.

Sadly though, the Redskins received next to nothing from anyone else on offense.

Without Pierre Garcon in the lineup, Griffin didn’t have a go-to weapon to turn to. Even though Santana Moss and Fred Davis have been dependable options in the pass, they were both missing in action — combining for just 28 receiving yards on five catches for the game.

Morgan led the offense with five catches for 50 yards, which would have been fine, if not for his aforementioned temper tantrum at the end of the game. Leonard Hankerson had a 68-yard touchdown, but was nonexistent the rest of the game.

Basically, Griffin played his ass off and the rest of the offense was nowhere to be found. While it truly is enjoyable to see a rookie quarterback playing so well so quickly, he’s going to need other players to start contributing (and blocking) sooner rather than later — unless people are eager to start the Kirk Cousins era.

4. “The Pit” by Silversun Pickup

Can someone please tell me how special teams coach Danny Smith remains employed?

Seriously, how was he even able to board the team plane and catch a ride back to Ashburn after his unit allowed a punt to be blocked for the second-straight week?

This, of course, comes after his special teams unit missed 10 field goals attempts last season — with five of them being blocked.

Oh, and his go-to return specialist Brandon Banks — the guy who Smith allegedly stood on a table to keep on the roster — continues to put the football on the ground at least once a game.

Smith is, by all accounts, a swell guy. Those who spend time with him, always walk away impressed. But his unit has been a weak link on a team with very little room for error for far too long now.

There’s a new kicker. A new long snapper. And countless other new faces playing special teams these days. And yet, the results remain the same.

Only one thing left to do — dump Danny Smith.

Orakpo tried to come back into the game, but ultimately was unable to remain in the lineup.

If that’s not bad enough, defensive end Adam Carriker injured his right knee on the second play of the game and left the stadium on crutches.

Add in a mild concussion for Josh Wilson, and things are definitely getting dire for an already banged up defense having trouble stopping anyone. Wilson, thankfully, was able to return to the game, but concussions are still nothing to joke about.

Once upon a time the front seven of the defense was considered the deepest part of this roster.