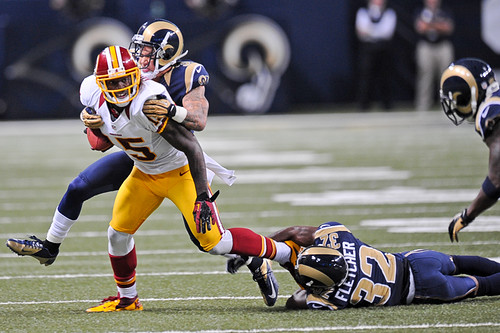 Okay, so the Washington Redskins aren’t exactly ready for prime time just yet.

While there were still a few positives to take away, the simple fact that the Redskins continue to find ways to lose to a St. Louis Rams squad that has trouble consistently beating anyone else is enough to put a damper on the excitement level Week 1 brought to the nation’s capital.

While quarterback Robert Griffin III continues to find new and creative ways to impress, too many of his teammates failed to match his intensity level against St. Louis.

The offense showed glimpses, but failed to put together time consuming drives that enable the season opening win at New Orleans. The defense created three turnovers, but struggled slowing down Sam Bradford and friends. And special teams … well … they sure are “special,” aren’t they?

But the beautiful thing about an NFL season is the Redskins could absolutely make it all better by winning next weekend against Cincinnati. Before you completely move on to next week’s game though, please take a minute to check out my favorite photos I was able to capture from the sidelines.