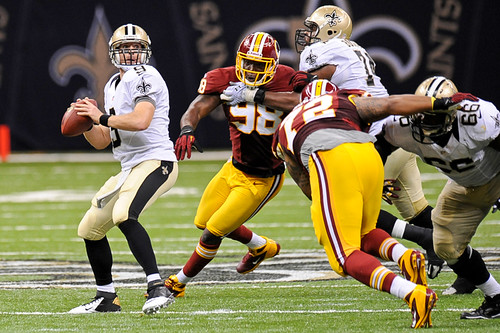 In 2011, New Orleans Saints quarterback Drew Brees completed an incredible 71.2 percent of the passes he threw — which was easily tops in the NFL.

Against the Washington Redskins in the 2012 season opener though, Brees wasn’t nearly as efficient — completing just 46.2 percent of his 52 pass attempts.

The last time the 33-year-old completed less than 50 percent of his passes in a game was in ’06, his first season with the Saints.

To put that in perspective, Brees has played in 96 games for New Orleans. During that time, only two teams have held him below 50 percent for an entire game and one of those performances came last Sunday.

In 2011, Brees and the Saints offense converted third downs a league-high 56 percent of the time. Against Washington, the Saints were able to convert just two of 11 third-down attempts (18 percent).

Which leads to an obvious question: how were the Redskins able to do such a masterful job of containing such a typically well-oiled machine?

The answer: by getting to Brees early and often, which then forced him to get rid of the ball quicker than he would have liked.

Another factor that worked in Washington’s favor was the fact that the Saints essentially gave up on running the football. For the game, New Orleans rushed the ball just 10 times for a total of 32 yards. Even though New Orleans only trailed 20-14 at the half, they opted to run the ball just twice in the second half.

“Going into the game, obviously the number-one goal was to stop the run and I thought we did a nice job at that,” said defensive coordinator Jim Haslett. “Then, we wanted somehow to disrupt the timing of the passing game whether it be to the rush, being aggressive with the coverage, putting pressure on the quarterback, hitting him, knocking balls down, and I thought [defensive end] Stephen [Bowen] batted a couple and [linebacker Brian] Orakpo batted a couple and [nose tackle] Barry [Cofield] was outstanding inside. I thought those guys did exactly what we needed to do to win the game.”

On the surface, Brees throwing for 339 yards with three touchdowns is a recipe for disaster for opposing defenses. But the Redskins will take those numbers because New Orleans became so on dimensional.

When a team only attempts to run the ball 10 times out of 64 offensive plays, it’s easy to figure out what’s coming next. That explains why six out of the 11 third downs the Saints faced in Week 1 were from 10 yards or more.

For the game, the Redskins capitalized on the situation by forcing New Orleans into three turnovers. Washington’s defense also picked up two sacks and battled down several pass attempts as well, which is why there is plenty to be encouraged about even though the defense allowed 25 points on the day.

Outside linebacker Ryan Kerrigan picked up where he left off last season — playing all 75 defensive snaps. One glance at the stat sheet shows why his coaches are content to never take the second-year pro out of the lineup. Kerrigan had a sack, drew two holding penalties and nearly intercepted a pass.

The team’s other top pass rusher was equally impressive. Orakpo had two tackles, two passes batted down and — if I’m being honest — he should have had his first-career interception. A Brees pass hit him in both hands, but Orakpo failed to haul it in.

“We’re used to rushing the passer, so sometimes when the ball gets to us we’re a little surprised,” said Kerrigan, who was obviously protecting his fellow outside linebacker.

Bowen also batted down two passes, and also played a large role in shutting down the New Orleans ground game. On one play in particular, Bowen was locked up with a Saints offensive lineman as Brees handed off the ball to Mark Ingram. Well, Bowen was somehow able to free up his left hand and, while still battling the lineman, stopped Ingram for no gain.

And then there was cornerback DeAngelo Hall, who had one of the most interesting games of his time with the Redskins. Hall has always been a polarizing player, with his high-risk, high-reward style of play. But it looks like this season he truly will be used in a completely different way than anything we’ve seen up to this point.

Hall blitzed Brees 10 times on Brees’ 53 dropbacks. He picked up the first sack of his nine-year career, and also had three hurries and a tackle for a loss on a Pierre Thomas run.

Think about this for a second — Hall had a sack while Orakpo and Kerrigan both had a chance to pick up interceptions. That’s not just a case of the Redskins winning a game in “bizarro world.” That’s Haslett and friends reaching deep into their bag of tricks to mix things up and keep the opposition guessing.

Brees throws for 5,000 yards a season in his sleep. In order to rattle him, you’ve got to really come up with some different looks and ideas. For one week, at least, the Redskins defense came up huge and picked up a much-needed win to help build some confidence moving forward.

“It was huge because with the first game of the year, you’ve played the preseason, but you’re still kind of wondering where you are,” Kerrigan said. “I think this is a huge step for our team to come out and get a win at the Saints. They’ve been one of the best teams in the NFL the last couple years, so this was huge for us.”

Looking forward, there’s no reason why the Redskins defense can’t be even more impressive this weekend. The “greatest show on turf” era has come and gone for St. Louis, and all that’s left is a team with 15 wins and 66 losses since 2007 (easily the worst in football during that time frame).

Last season, Rams quarterback Sam Bradford was sacked 36 times in just 10 games and St. Louis was just as bad in pass protection without Bradford in the lineup — surrendering a league-high 55 sacks in ’11.

Considering there’s a chance that three out of the Rams’ five starting offensive linemen will miss the game due to injury, this is definitely an opportunity to make Bradford more than a little uncomfortable.

Haslett did an excellent job of finding ways to put pressure on the opposition in New Orleans. If his defense is going to take a step forward this year and truly be considered among the league’s elite, they’re going to have to make life miserable for the lowly Rams.