why robert griffin III is the real deal 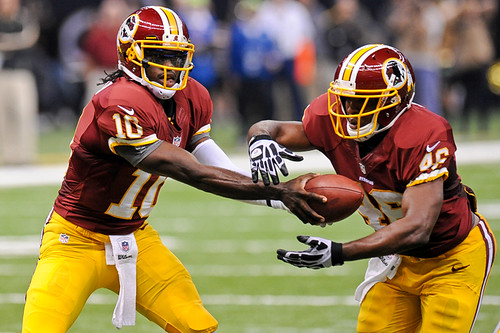 If Washington Redskins quarterback Robert Griffin III was nervous heading into his first NFL start, he did a masterful job of hiding it. During pregame warmups, Griffin could be seen practicing drop kicks, throwing passes left handed and even goofing around with the marching band that was scheduled to play during halftime.

Sure, there were skeptics who wondered whether RGIII’s skill set would translate from a “gimmicky” college system to the pros — especially after the rookie attempted just 31 passes during the entire preseason — but all it took was one quick look in the general direction of the league’s youngest starting quarterback to know Griffin was completely at ease with the situation.

And that’s fairly remarkable, when you stop and think about it.

Consider this: I’ve been fortunate enough to cover the NFL from the sidelines for eight seasons now. Until this past weekend, I was convinced the Seattle Seahawks played in the league’s loudest venue, but after spending a day in the Mercedes-Benz Superdome, I’ve changed my mind.

Everything about New Orleans is a nonstop party. The people are always in a festive mood and the Saints have been so good in recent years that everywhere you go you see passionate fans decked out in black and gold.

Plus, the high-powered Saints are really, really good at home — going undefeated in 2011 in the Superdome — so there’s always plenty for the locals to cheer for. And that’s before you even get to the part where a judge overturned the suspensions handed out by Roger Goodell to Jonathan Vilma, Will Smith and friends.

It didn’t even matter that Vilma was unable to play in Week 1 due to an injury. The mere sight of him on the sidelines just prior to kickoff was enough to send the entire building into a frenzy that was unlike anything I’d ever heard before in an NFL venue.

When Vilma led the crowd in a “Who Dat” chant just minutes before kickoff, the roar of the sellout crowd was enough to send chills down my spine. If this was the single loudest moment I’ve ever experienced in my eight seasons on the sidelines, I had to wonder how a rookie making his first start felt in that instant.

Amazingly, RGIII was completely unfazed by anything thrown at him in his debut. Whether it was the pregame festivities or the Saints defensive scheme, Griffin looked like a battle-tested veteran as he methodically marched his team up and down the field. When it was all said and done, RGIII completed 19 of 26 passes for 320 yards with two touchdowns and no interceptions.

How was Griffin so effective so quickly? How was he able to walk onto the field and put together arguably the best debut performance by any rookie in NFL history, you ask?

The simple truth is — Griffin was so good so quickly because Mike and Kyle Shanahan completely overhauled their system to fit their quarterback’s skill set. I’ll let the Wall Street Journal explain:

Last season, the Redskins ran out of the shotgun 33 percent of the time — just shy of the 41 percent average for all NFL teams. On Sunday, however, they ran it on 20 of the first 23 offensive snaps, something you hardly ever see outside college campuses.

There was no ill-advised attempt to fit a square peg into a round hole. This wasn’t an example of a head coach believing his system was better than his quarterback. No, this was Shanahan sending a message to not only Griffin — but the rest of the league — that he believes this kid is so good, he’s willing to rethink the way he wants his team to play the game.

“When you’ve got a guy like Robert who has the ability to really keep a defense off-balance with his ability to do a lot different things, then you’ve got to make decisions [on] what you think works best with his talents,” Shanahan said. “There are a lot of different directions we can go and we’ll experiment as the year goes on.”

You might recall that McNabb, Washington’s last high-profile quarterback, publicly stated back in March that he believed Griffin wasn’t going to be a good fit in Shanahan’s system.

“No, I say that because a lot of the time ego gets too involved with when you’re playing in Washington,” McNabb said. “Here’s a guy who’s coming out who’s very talented, mobile, strong arm, we’ve already heard he’s a very intelligent football mind. Are you going to cater the offense around his talent and what he’s able to do or are you going to bring the Houston offense with Matt Schaub over to him and have him be embedded in that whole thing.”

It was only one game, so it’s foolish to rush to judgment, but it’s pretty clear that Shanahan didn’t let his ego get involved in the decision to alter the offense, as McNabb suggested.

“I think you always tailor your offense to whoever your quarterback is, taking a look at what he can do,” said Shanahan. “I think, with Robert, the difference is you have a guy that can run under a 4.4 40 and then has the capabilities of really putting pressure on the defense. You only have to run the option or the option scheme one or two times a game. You may run it 10 times a game. But in the back of their mind, a defense knows you have the ability to do it.

“So you have a chance to keep them off-balance even if you don’t run it a lot, and you can run whatever kind of offensive system you want,” he continued. “So the fun part about being able to experiment with some of the things we’ve done is keeping the defense honest because it’s them not knowing how many times you’ll run the option.”

Those comments make it readily apparent that Shanahan has complete trust in Griffin. Even before the Redskins had officially drafted RGIII, Kyle Shanahan spent time with him down at Baylor to ensure that Griffin was more than ready by the time his first game rolled around.

Which is why the arrival of Griffin clearly signifies the dawn of a new day in Washington — not only for a once-proud franchise hoping to return to relevance, but also for a two-time Super Bowl winning coach hoping to prove once and for all that he’s capable of winning without the services of John Elway.

If this first game is any indication of how the Griffin era will play out, ‘Skins fans can take solace in the fact that their head coach is bending over backwards to put his franchise quarterback in the best position possible to succeed.

Which brings me to one surreal moment from inside the locker room. As I entered the room in search of post-game comments, I immediately noticed Redskins owner Daniel Snyder pulling Griffin aside. Because Snyder doesn’t exactly have a ton of love for the media, we don’t usually get to see him interacting with his players like this, so I was interested to see what happened next.

Well, the owner had one simple message for his new franchise quarterback, who was still wearing his uniform and holding onto the football he threw for his first-career touchdown:

Before turning and walking away, RGIII held out his hand and gave the owner a quick fist bump — something I can honestly say I had never seen the owner do before.

But like I said at the beginning, Griffin is clearly in control no matter what situation he finds himself in. Which is why I firmly believe that Griffin — unlike Heath Shuler, Patrick Ramsey and/or Jason Campbell — is more than capable of restoring glory to the once-proud Washington Redskins.