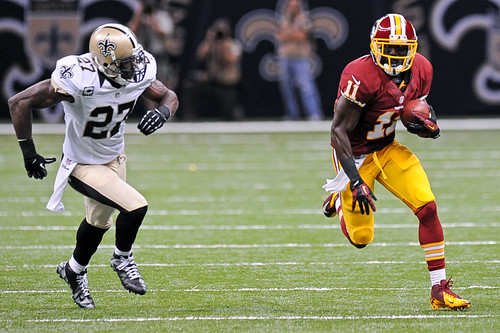 Griffin’s first pass of the team’s second drive also went to Garçon and was fairly memorable, as it resulted in an 88-yard touchdown that gave the Redskins an early 10-7 lead over the New Orleans Saints.

Unfortunately for Washington — and especially the rookie quarterback — Garçon was injured on the play and didn’t catch another pass after suffering a foot injury. Even though his day came to an abrupt halt, the 26-year-old had four passes thrown his way and he responded with four catches for 109 yards and a touchdown.

Anyone watching the early stages of this game (or the preseason or training camp) knows that Garçon has become Griffin’s go-to target, so needless to say, losing such a valuable weapon so early in a road game against one of the league’s top teams could have been a recipe for disaster.

Enter second-year receiver Aldrick Robinson, a speedy but undersized wideout from Southern Methodist who wasn’t even sure he was going to make the final 53-man roster one week ago.

While more attention has been given to pass catchers like Garçon, Santana Moss, Joshua Morgan, Leonard Hankerson and Fred Davis, Robinson has quietly carved out a role on this team with his ability to get open and his blazing speed.

Those two traits served the 23-year-old well on Sunday, as he filled the void created by Garçon’s injury with four catches for 52 yards and a touchdown.

Consider this: once Garçon left the game, no player had more receptions or more passes thrown his way than Robinson.

On Washington’s third drive of the game, with the team facing a 3rd-and-goal from the 5-yard line, Robinson lined up on the far right. Moss and Davis were both lined up on the right side as well, and as soon as the ball was hiked, Robinson took one step forward and then quickly slanted across the middle.

Because the Saints defense seemed more concerned with Moss and Davis, Robinson was able to get the inside track on the nearby defenders and Griffin hit him in stride for his first-career touchdown. That score gave the Redskins a 17-7 lead and they never looked back.

Garçon wasn’t the only wide out who walked away impressed with Robinson.

“He came in and did great,” said receiver Joshua Morgan. “Like Coach Shanahan said all throughout training camp and OTAs, if one of the starters goes down, the next guy has got to come in and play like a starter. There shouldn’t be a fall-off, and he came in and did just that. When you’ve got the type of talent on your team where you can do that — the sky is the limit for you and your team.”

The best thing I can say about Robinson’s performance was that he absolutely seized the opportunity. He was someone who spent a good chunk of his rookie season on the practice squad and it’s clear he wanted to make the most of his first chance to see the field.

“You always want to play and you definitely want to help your team out,” he said. “That’s what I’ve always said before, I want to do things out there to help the team this year. We looked really good out there. Robert executed the offensive gameplan just like the coaches wanted him to, and when you’ve got that at quarterback, it’s tough to stop it.”

As far as gameplans goes, the Redskins couldn’t have asked for a better start to this contest.Not only did Washington open the game with a lengthy drive that put points on the board (which has obviously been an issue with this team in the past), but then they followed it up with a statement play from Garçon.

“That was a big play by Pierre,” Robinson said. “He set the tone — and that’s what he always does, he sets the tone. It was just like in the preseason in Buffalo. He’s a playmaker.”

While Garçon’s 88-yard score was a quick strike, Robinson’s touchdown was the exact opposite — capping off a 12-play, 57-yard drive that methodically picked apart New Orlean’s defense and showed the Redskins meant business.

“It was nice, man,” Robinson said. “I felt like I knew I was going to get it. I just had to catch the ball and it was gonna be my first NFL touchdown. And that’s what happened.”

Bold words for a young man who had never actually caught a touchdown pass at the pro level.

“We didn’t worry about coming out here and being underestimated or anything like that,” he said. “We just came out here with confidence that we were going to be able to get the win.”

If you think about it, Robinson and the Redskins are a perfect match. The so-called “experts” didn’t really give either one much of a chance, which is only helps to further motivate them.

“It definitely feels good, but in this league, you never know,” he said. “You can only pray about it. It worked out for me and now I’m here just trying to help out my team. It’s always good to show my true speed. Sometimes I’m not able to show it because it takes me a little while to get going at that top speed, but once I get going I am pretty fast.”

Of course, having such a talented quarterback like Griffin involved in the mix doesn’t hurt either. When Robinson is able to use that speed to get open, he said he knows the ball is going to be exactly where it’s supposed to be.

“He’s great. He’s great, man,” Robinson said. “It was a great start for him — getting a win in his first NFL start — and I just enjoy playing with him. Catching passes from him is like standing in front of a JUGS machine. He puts it exactly where you want him to throw the ball.”

Sure, it’s never wise to overreact to the first game of the season. But at the same time, winning is always better than losing. And if guys like Griffin, Garçon and Robinson can consistently play at this level, there are going to be plenty of wins to enjoy.