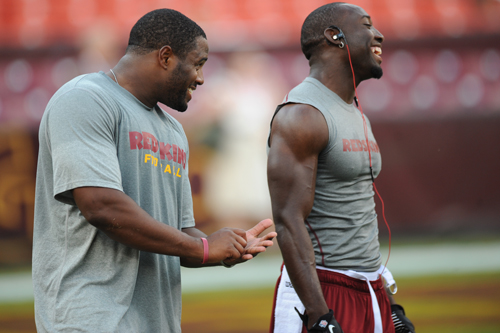 While I typically stick to sports on this blog, I think it’s safe to say that “Call Me Maybe” by Carly Rae Jepsen has definitely gone viral.

In case you’ve been in a coma this summer or live in a world without music, there are countless tributes to this particular bubblegum pop song — including, but not limited to the video of the Harvard baseball team lip synching on a road trip, service members deployed to Afghanistan covering it and of course, there’s the Miami Dolphins cheerleaders video that was featured on HBO’s Hard Knocks.

In short, it’s impossible to avoid this song. Even on a sports blog.

Which is why I wasn’t all that surprised to hear it playing at FedEx Field a few hours before kickoff when the Washington Redskins hosted the Tampa Bay Buccaneers last week. With so much time to kill before the game even starts, it’s understandable that the in-house folks would help pass the time by playing a few songs that aren’t exactly what passes for typical stadium music.

Which brings me to Redskins fullback Darrel Young.

Hearing “Call Me Maybe” play at FedEx Field two hours or so before a game isn’t all that newsworthy. But seeing a 5-foot-11 and 251 lb. man enjoying that pop tune so much that he felt compelled to serenade his teammates … well … that’s a little different, isn’t it?

“Call Me Maybe, Miley Cyrus … I absolutely listen to that stuff. That’s great music,” Young said. “You know, I don’t discriminate on music. Just because it’s a young lady’s voice, you can’t knock her for what she’s doing. I like the song. I sing ‘Party In The U.S.A.’ as well.”

Young isn’t a small gentleman. In fact, I would go as far as to say that if he wasn’t such a nice guy, he would easily be one of the most intimidating players in the team’s locker room. And yet, he’s now voluntarily admitting to loving the kind of music my wife blasts to drive me crazy on road trips. How on earth did this happen?

If you look at the photo above, you’ll clearly see receiver Aldrick Robinson cracking up while simultaneously trying to distance himself from Young. Why? Because Young gets so into the song that he was even pretending to jot down his phone number and give it to Robinson as he sang along.

But I can’t be too tough on Young. It’s been a tough month or so for the 25-year-old, who missed the entire preseason after straining his hamstring during training camp. Originally it was thought he’d miss the first two preseason games before making his return. Unfortunately for the third-year pro, his injury has taken longer than expected to heal and — judging by his pregame musical preferences these days — he’s been stranded on the sidelines for far too long.

“It’s rough anytime you’re in a position to do something that you love and you can’t perform because of a setback,” Young admitted. “Mentally, it can be messed up. I just can’t wait to hit somebody. I told Kyle [Shanahan] what I want the first play against New Orleans to be. If he follows it, hey, I don’t know. But after watching film, I know how bad I want to be out there.”

Clearly Young isn’t meant to be sidelined. Since injuring his hamstring, he’s started serenading his teammates and playing arm-chair offensive coordinator. For the sanity of Young and his teammates, this guy needs to get back onto the field as quickly as possible.

But before he does, feel free to click the audio link below to hear Young sing “Call Me Maybe” for yourself. Words simply cannot describe how wonderfully awesome this little soundbit truly is.