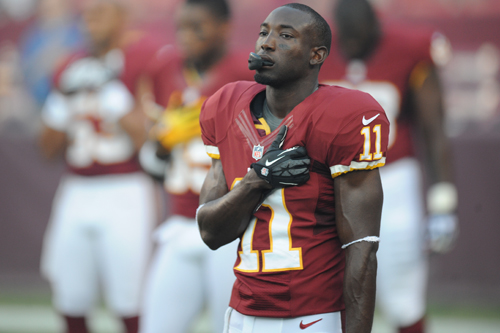 Southern Methodist University is not considered a football powerhouse.

In fact, when most sports fans think of SMU, the first thing that probably comes to mind is the “death penalty” sentence the NCAA handed down that resulted in the canceling of the 1987 season.

Well, clearly the Washington Redskins have a different opinion of the Mustangs these days — as evident by the three SMu players currently on the 53-man roster.

Consider this: just five Southern Methodist players have been drafted over the last two years. Three of them — offensive lineman Josh LeRibeus, cornerback Richard Crawford and receiver Aldrick Robinson — were selected by Washington.

Some might find this unusual — especially considering the Mustangs have gone just 24-28 since June Jones took over the football program in 2008. What do the Redskins apparently see in this middle-of-the-pack football program that no one else does?

“We’re a pipeline, man,” Robinson said with a laugh. “We’re putting them in the league like crazy right now. We’ve got SMU guys in Pittsburgh, in New England. We’re everywhere these days.”

I respect Robinson’s enthusiasm, but that still doesn’t change the fact that the Mustangs have a long way to go before they’re competing with the big boys of college football.

“Yeah, we haven’t been playing good ball,” he admitted. “But we’re getting back to our regular form.”

If SMU is going to turn the corner to respectability, Crawford knows one area that needs to be improved upon.

“We were a really good team, we just didn’t have any depth,” he said. “Our stars are really talented and they always have been, but we’ve just never had any real depth. Last year, we didn’t even have three corners. We played with two. The other guy was a freshman and I didn’t really feel comfortable with them putting him in. Now he’s going to be a starter and I think he’s going to be a better player than I was, but that lack of depth really hurts you.”

Like his alma mater, it’s not tough to overlook Robinson on first glance. Listed at 5-foot-10 and 181 lbs., the second-year pro doesn’t exactly possess a prototypical NFL receiver frame.

“Well, I ain’t got a lot of size,” Robinson said. “God didn’t bless me with that, but he blessed me with a lot of other things like speed and shiftiness. I can get in and out of my breaks quickly and I’m fast. I’ve got good hands. I’m a playmaker, man.”

A year ago, Robinson wasn’t even considered a legitimate option, even though the receiver position wasn’t exactly full of top-tier talent. This time around, Robinson felt confident that he had played well enough to earn his way onto the roster.

When asked to break down his teammates’ game, Crawford doesn’t hesitate.

“He’s one of the fastest human beings on the planet,” Crawford said of Robinson. “He’s a very talented receiver. I remember he came to SMU as a track guy that also played football. Now, he’s a football player who runs fast. He’s really polished his game and I’m really proud of him from what I saw last preseason to what he’s done this preseason. Seeing the jump he’s made in his game, I’m just proud to call him my teammate and friend.”

“Once we drafted him, I knew we were getting a good player,” he said of Crawford. “I played with him in college and saw he had great ball skills. You can already see with the interceptions he’s gotten that he’s got a knack for the ball. That’s what he brings to the table and he’s a good cover guy too.”

For LeRibeus, who once weighed as much as 360 lbs., working his way into playing shape and getting used to utilizing the chop block were the two biggest areas of focus during the preseason.

“My spine doesn’t thank me for that and there were a couple of times when it looked like I just flopped out there, but when you connect on a few blocks it feels good when you really hit a guy and know you opened up a huge lane,” he said. “I could have used some of that cushioning from the old days, but no, it was fun to get out there and haul ass. When we were on that eight-minute drive [against Tampa Bay] we were still balls-to-the-wall. That’s a testament to what Coach Shanahan has done in practices. We’re going hard every day and I think it’s already starting to pay off for me.”

As far as LeRibeus is concerned, the preseason couldn’t really have gone any better. He got invaluable playing time in this system and was able to improve each and every time he took the field.

“It’s just a confidence booster,” he said. “From Buffalo, when I knew the offense and knew what was going on, but don’t know how it’s going to be going up against these huge guys. I learned I could blocks them through Chicago and Indy, and then finally, you saw the final score. We were definitely more refined than we’ve been. I’m beyond excited for the season now.”

Conversely, Crawford refuses to pat himself on the back after an equally strong preseason. Even though the seventh-round pick had two interceptions, he’s still too much of a perfectionist to be content.

And yet, nothing was guaranteed for Robinson and his Mustangs compadres. There was still a chance they could have been on the outside looking in with Washington finally having some legitimate depth on the roster for the first time since Shanahan came to town.

“I’m just going to sit and wait, man. I’m going to put my phone on silent so if I do get a call, I ain’t gonna hear it,” he said with a laugh.

Fortunately for Robinson, the phone call he was dreading never came and now he’s got the chance to reward the Redskins for their faith in him and his SMU teammates. If each of them can continue to build upon their strong preseason showings, it’s safe to say the Redskins will likely turn their attention to Southern Methodist again in future drafts. And if other teams aren’t smart enough to follow suit, that would be even better.