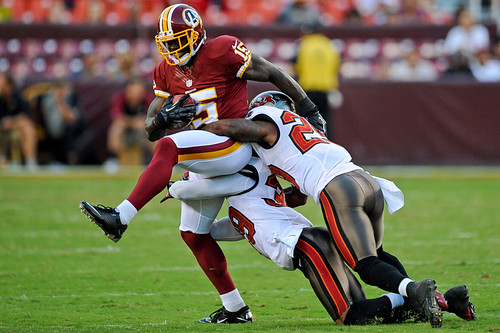 Disclaimer: If preseason stats actually mattered, guys like Jimmy Farris and Jesse Lumsden would be first-ballot Hall of Famers.

Fans of the Washington Redskins would do well to remember that as they try to forecast which players will survive final cuts and make it to the 53-man roster.

Over the last few years, the Redskins were so lacking in talent that some players made the final roster — not because of anything they did, but because a player they were competing against managed to play even worse.

Mercifully, head coach Mike Shanahan has done a solid job of overhauling the roster and those days appear to be a thing of the past. For the first time since he arrived, Shanahan actually seems to have some tough choices to make as he tries to build the best 53-man squad possible.

Two positions in particular — receiver and linebacker — have likely kept decision makers up late at night during the evaluation process. How many receivers can Washington keep? Which linebackers should stick around? These are difficult questions that must be answered before the Redskins can turn their attention to a Week 1 match-up with the New Orleans Saints.

It goes without saying that this is Robert Griffin III’s team. But which receivers he’ll have to work with still remains murky.

The first few names on the depth chart are set — with Pierre Garçon, Santana Moss, Leonard Hankerson and Joshua Morgan locks to make the team. But the rest of the wide out candidates are much less certain.

Anthony Armstrong — In 2010, Armstrong had 44 catches for 871 yards with three touchdowns. He averages 19.8 yards per reception and was a dependable target for Donovan McNabb whenever the Redskins wanted to throw the deep ball. But since then, the third-year pro has been irrelevant. His ’11 stats (seven catches for 103 yards) are what top-tier guys post in a week, not an entire season.

Why he should: He’s one of the faster guys on the roster and a solid special teams player.

Best guess: I believe the Armstrong makes the team. If he was able to make an over-the-hill guy like McNabb look good throwing the deep ball, then Shanahan’s got to believe he can do the same for RGIII.

Terrence Austin — Would you believe Austin’s stats were better than Armstrong’s last season? They were (12 catches for 137 yards).

Why he should: Austin might be undersized, but works his tail off. He can also play special teams, which is necessary when factoring the last receiver or two.

Why he shouldn’t: He’s a well-rounded player, but doesn’t really excel in any one area.

Best guess: He’s a likeable guy and easy to cheer for, but there are better players in this discussion.

Brandon Banks — Before the preseason even began, it was made clear that the only way Banks was going to make this football team was if he proved, once and for all, that he could contribute on offense. Sure, he’s a talented returner and all, but the rule changes the NFL made last season make it much tougher justifying a roster spot for someone who only returns punts and kicks.

Why he should: Banks has scored a special teams touchdown each of the past three preseasons. He’s a little guy, but if a defense gives him any room, he can make them pay. Plus, special teams coach Danny Smith has said he’ll stand on tables, if need be, to defend keeping Banks.

Why he shouldn’t: He was told to he had to contribute on offense to continue earning a paycheck and, with his career on the line, responded with just three catches for 54 yards this preseason. Not exactly taking the bulls by the horns, is it?

Best guess: He’s a fan favorite and Smith loves him, but I still don’t think that’s enough to sway Shanahan to keep him.

Dezmon Briscoe — At 6-foot-2 and 210 lbs., Briscoe possesses the prototypical NFL receiver body. He’s a big target with good hands and he’s not afraid to go up and get the ball if a pass is a little off target. Also worth nothing: the 23-year-old led Tampa Bay with six receiving touchdowns last season.

Why he should: Briscoe caught six passes for 117 yards with two touchdowns this preseason.

Why he shouldn’t: He doesn’t play on special teams and wasn’t barely used in the fourth and final preseason game.

Best guess: Out of everyone on this list, Briscoe seems to have the most upside to me. I’d hate to see the Redskins cut him and then watch him blossom into a full-time player elsewhere. Hopefully he makes the squad and continues to show progress.

Aldrick Robinson — The SMU product has blazing speed and is an underrated kick returner (27 yards per return during the preseason).

Why he should: Robinson looked like an impact player after posting six catches for 104 yards and a touchdown against Chicago in the second preseason game of the year. On his touchdown catch, the 23-year-old was able to haul in a less-than-perfect pass and outrace defenders for the score.

Why he shouldn’t: Yes, he had eight catches for 132 yards and a touchdown during the preseason, but most of that came in the Bears game. Otherwise, Robinson had just two catches for 28 yards.

Best guess: If the Redskins keep six receivers, he’s gone. If they find a way to keep seven, I think he sticks around.

That means I’ve got Armstrong and Briscoe making the 53-man roster if Washington only keeps six receivers. Robinson survives if they keep seven, or maybe they try to stash him on the practice squad. Either way, this is a much-improved position from just a year ago — when guys like Donte Stallworth and David Anderson somehow managed to collect paychecks.