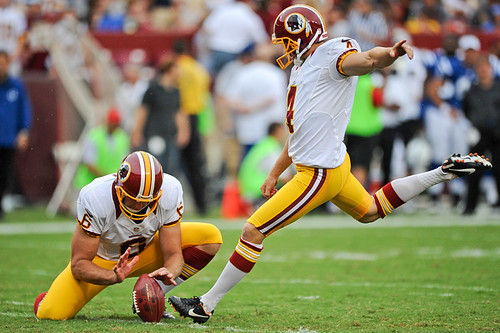 And for the second time in his brief NFL career, Gano has lost a job to journeyman kicker Billy Cundiff– who bested Gano in Baltimore in 2009.

What do we know about Cundiff? Well, for starters, dude knows how to get around.

*At this rate, he’ll have played for every team in the league by 2034!

Cundiff, of course, was only available after the Ravens released him Sunday. Head coach Mike Shanahan must have grown tired waiting for Gano to prove he was capable of being the long-term solution in Washington, so he hands over the job to a 32-year-old who was a Pro Bowl in 2010.

It’s also worth noting that over the past two seasons, Cundiff has converted 53 of 59 field goals from 50 yards or less, and he leads the NFL in touchbacks. On the flip side, he connected on just one of seven attempts from beyond 50 yards the last two years and missed a 32-yarder in the playoffs last season that proved costly in Baltimore’s loss to New England.

The Redskins have had a revolving door at kicker since Chip Lohmiller left town after the 1994 season. Cundiff struggles to stay anywhere long enough for people to learn how to spell his name. Clearly this is a match made in heaven.