getting to know richard crawford 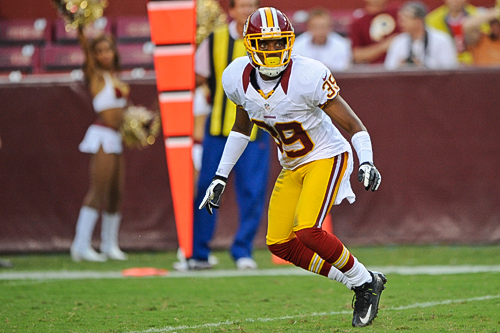 It’s not Kevin Barnes’ fault he was drafted by an idiot.

That was my initial thought Monday evening when I learned the fourth-year pro had been dealt by the Washington Redskins to the Detroit Lions for an undisclosed draft pick. After all, if anyone with a shred of common sense was involved in the decision-making process, Barnes never would have ended up in the burgundy and gold to begin with.

That’s because former executive vice president for football operations Vinny Cerrato had the chance to trade away that third-round pick (80th overall) in the 2009 NFL Draft for Kansas City running back Jamaal Charles, but because he’s Cerrato, he kept the pick and reached on Barnes instead.

Barnes struggled from the start here in Washington, playing in just four games his rookie season and the Redskins’ ground game was equally atrocious — Clinton Portis was knocked out of the lineup with a concussion halfway through the season and the rest of the pack (Rock Cartwright/Ladell Betts/Quinton Ganther/Marcus Mason) was unable to pick up more rushing yards than Jason Campbell.

Mercifully, Cerrato was gone after the ’09 season and the Redskins were officially turned over to people who know what the hell they were doing. These days, instead of wasting high-round picks on mediocre talent, Washington is able to find diamonds in the proverbial rough.

Case in point: cornerback Richard Crawford, who was selected with a seven-round pick (213th overall) in this year’s draft. The Southern Methodist product was the 25th cornerback chosen and was ranked by Scouts Inc. as the 75th best cornerback available, and yet, head coach Mike Shanahan and friends saw something in him.

Next thing you know, training camp starts and Crawford is the best rookie not named Robert Griffin III. He picks off two passes in his first week of camp and nabs another interception in his first preseason game.

Suddenly, he’s creeping up the depth chart and in the running for legitimate playing time while a player like Barnes can only dream of making such an impact.

“I’m just a player who is going to bring my full effort to the table at all times,” said Crawford, who previously played for something allegedly called Saddleback Community College before transferring to SMU.* “I’m just trying to help the team win however possible, whether it be on special teams or on defense in the nickle, dime or whatever. I’ll do whatever I have to do because I’m here to win championships. Nothing else — not individual stuff at all — matters to me.”

*Did you know the Redskins have selected three Southern Methodist players in the last two drafts? Receiver Aldrick Robinson (a sixth-round pick in ’11) offensive lineman Josh LeRibeus (a third-round pick in ’12) and Crawford. Not bad for a Conference USA school that’s gone just 15-12 the last two seasons.

That’s great and all, but most rookies — regardless of where they’re drafted — come in and immediately find their heads spinning as they try to make the jump from college to the pros. And more times than not, seventh rounders are just hoping to make the team. How has Crawford been able to walk onto the field and make such an immediate impact?

“I’m just being a football player and studying,” he said. “I wasn’t really a player who got a lot of attention. I didn’t go to the combine and I don’t even think I was listed on the junior prospect list coming out of a junior college, but I feel like I have a lot more value than someone coming out of the seventh round. I’ve got a chip on my shoulder and I’m just trying to show it.”

Crawford admitted to having a chip on his shoulder, so I was curious to hear how much of the draft he watched. Did he think he was going to be selected in earlier rounds? Was he driving himself crazy as he sat in front of the television waiting for his name to be called?

“I watched the first day,” Crawford said. “I saw Robert [Griffin III] get picked and I knew people who were going to get picked on the first and second day, so I watched. When [SMU teammate] Josh [LeRibeus] got picked, I turned it off. For the rest of it, I was asleep. I thought I was going to be a free agent. When the Redskins called me, I had just woken up five minutes earlier. But I’m happy to be a Redskins and happy to be here now.”

While he had already prepared himself in the event he wasn’t drafted, Crawford said it wasn’t that much of a surprise that he ended up in Washington.

It’s only natural that a young player just trying to make the 53-man roster would be willing to do whatever it takes to remain employed, but does Crawford have a preference as to how he’s used? Does he feel more comfortable playing man-to-man or in a zone? Would he rather play the nickle or dime?

“When it comes down to it, it’s still covering,” Crawford said. “You’re either covering a guy or covering an area. It’s all the same to me. I don’t really have a preference … but I actually think nickle is pretty fun. You get to blitz. You get to hit people. And outside corner is where you get your interceptions at. There’s good in both worlds.”

Another reason Crawford is valuable to this football team is his ability to play on special teams. While a guy like Brandon Banks has struggled to show coaches he can contribute in more than one way, Crawford has had no such problems.

“It’s fun on special teams,” Crawford said, who returned three punts for 42 yards against Buffalo. “It’s real fun to have the ball in your hands or you get to run full speed and try to knock somebody out.”

When asked to evaluate his performance to date, Crawford wasn’t interested in talking about the handful of plays he’s made. No, he immediately turned his attention to what he needs to improve upon.

“I wasn’t really all that. I missed a tackle or two,” he said, in regards to his play against Indianapolis. “And that’s not like me. I can’t afford performances like that.”

Between his versatility and his humble demeanor, it’s no wonder Crawford has already started winning over his coaches.

“I like Crawford,” said defensive coordinator Jim Haslett. “He loves football. He works. He’ll do anything. He’ll play nickel, corner, dime and he’ll punt return, so he does a lot of different things.”

And if he can become another ballhawk in Washington’s secondary, he going to win over a few more people along the way.

“I like him, man. I like the kid,” said cornerback DeAngelo Hall. “I can remember coming in here during OTA’s, they just had a rookie camp and Raheem [Morris] was showing us film on some of the rookies. We immediately saw him catch the ball and we were like, ‘Man, who is that kid?’ He just had great ball skills. He had a knack for just being around the ball.”