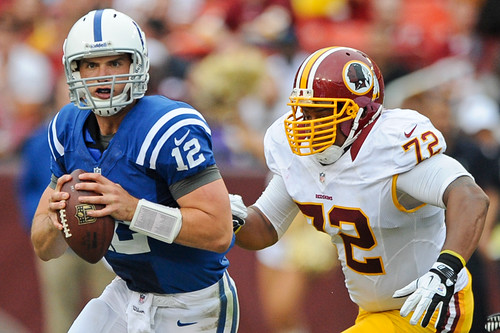 It’s safe to say that the Washington Redskins’ home opener was one of the most highly-anticipated preseason games in recent history. Not only was it a chance for ‘Skins fans to see quarterback Robert Griffin III in person for the first time, but the opposing team just so happened to have a highly-touted rookie quarterback of their own.

How rare was this exhibition match-up? Very.

In fact, Griffin and Indianapolis Colts quarterback Andrew Luck became the first rookie quarterback duo selected with the top two picks to face off in a preseason game since 1999, when Cleveland’s Tim Couch and Philadelphia’s Donovan McNabb faced each other.

And neither quarterback disappointed.

Griffin completed 11 of 17 passes (64.7 percent) for 74 yards and a touchdown, finishing with a quarterback rating of 93.8. Luck completed 14 of 23 for 151 yards with a touchdown, with a QB rating of 94.7. Both players looked very comfortable calling the shots for their respective teams and, best of all, neither looked like a rookie out there.

RGIII led the offense on touchdown drives of 66 and 80 yards on the team’s only two drives of the second quarter and recorded five first downs on each drive. On third downs, which have been an issue for the Redskins in recent years, the Heisman Trophy winner managed to find ways to keep the chains moving and, unlike Luck, Griffin was able to spread the ball around to more than just one or two targets, which helped Washington secure the 30-17 win over Indianapolis.

Because he won’t play in the fourth preseason game, Griffin heads into the regular season having completed 20 of 31 passes (64.5 percent) for 193 passing yards, with two touchdowns, no interceptions and a QB rating of 103.3. Needless to say, his coach is happy with how he performed during his three exhibition games.

“I thought Robert did a good job,” said head coach Mike Shanahan. “I think he keeps on getting better and better and more comfortable with the system, what we’re trying to do. That goes with the experience that most quarterbacks need to get better in the National Football League.”

While much of the nation tuned in to see RGIII versus Luck, it was the performance of anotehr rookie that stole the show. Sixth-round pick Alfred Morris rushed for 107 yards and a touchdown on just 14 carries and did his best to stake his claim as the Week 1 starter when the Redskins travel to New Orleans to take on the Saints.

Preseason or not, Morris’ performance was encouraging because Redskins running backs have cracked the 100-yard mark just nine times since Shanahan came to town. While Roy Helu Jr. and Evan Royster both looked solid last season, both are injured at the moment and the only other running back of note on the roster — Tim Hightower — just returned to action after tearing his ACL last year.

All of which means Morris has been given a chance to show what he’s made of, and he’s made the most of the opportunity.

“You can say that,” Morris said. “I definitely had a lot of opportunities, especially early on. Me being a rookie, I never thought that I would be getting this many carries or this much action on offense so soon. But at the end of the day, it’s the coaches’ decision. I’m going to keep making it hard, making the decision hard on them who’s going to be the starter and keep going out there and playing hard.”

3. “Blood” by My Chemical Romance

With both Griffin and Morris having productive days, it’s worth noting that the beleaguered offensive line had a respectable day at the office.

The offensive line is still without the services of right tackle Jammal Brown and guard Kory Lichtensteiger, but the guys stepping up to fill those holes have done an admirable job thus far. Sure, RGIII took a shot or two his coaches would rather not see, but the line didn’t allow a sack the entire day and the first-string offense averaged over seven yards a carry.

Can’t ask for much more than that.

And just to show how tough he is, center Will Montgomery still managed to block his man down field after losing his helmet on one play. The Virginia Tech product needed stitches after the game thanks to a gash on his forehead after being hit by a defender’s helmet, but Montgomery was so focused he didn’t even know he was bleeding until one of the referees told him.

Best of all, when the official did inform Montgomery of the blood streaming down the side of his head, he just nodded, picked up his helmet and went back to the huddle for the next play.

Last week, the Chicago Bears’ starting offense had little trouble moving the ball up and down the field against Washington’s starting defense. Pass rusher Brian Orakpo said that was because the team essentially went into the game blind because they didn’t specifically gameplan for the Bears.

Against the Colts though, the Redskins defense prepared as if it was a regular season affair, and the results were encouraging. Defensive coordinator Jim Haslett had to like much of what he saw as his aggressive defense was able to consistently pressure Luck while also limiting Indy’s ground game to two yards per carry on the day.

Middle linebacker London Fletcher and defensive end Stephen Bowen each picked up a sack on Luck, and cornerback Josh Wilson did a masterful job of shutting down his man in the passing game.

“We got a lot of talent on the defense, a lot of depth at every position,” said middle linebacker London Fletcher. “We got a lot of guys who can play football in the National Football League. Really we have the potential to be a top five defense, but we are going to have to keep working at it. Each week, go out and execute the game plan and try to get better.”

5. “Jump Into The Fog” by The Wombats

If you’re a fan of the burgundy and gold, the best part of this dominating win was seeing role/depth players stepping up. With Orakpo out of the lineup, a guy like Chris Wilson was able to get more playing time and responded with a safety. With safety Brandon Merriweather sidelined, Tanard Jackson made his presence known.

On the other side of the ball, receivers Dezmon Briscoe and Terrence Austin found a way to make Rex Grossman look like a professional quarterback. Both made acrobatic catches during a fourth-quarter drive that ensured the FedEx Field faithful went home happy.

Considering Shanahan inherited the oldest roster in football when he took over the franchise, it’s got to be a relief to finally have some legitimate depth on the roster.

Finally, here’s a link to my photos from this week’s game.