adam gettis wants to destroy somebody 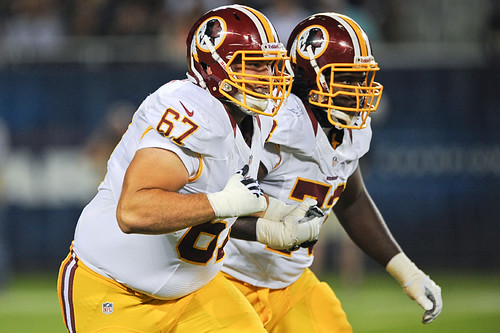 When the Washington Redskins traveled to Chicago to face the Bears last week, it was more than just another mundane preseason contest for rookie guard Adam Gettis.

The 23-year-old grew up near Chicago and went to nearby Lincoln-Way High School, so this was a chance for all of his friends and family to see him in action for the first time since he became an NFL player — which might explain why Gettis said he needed 50 tickets for the Redskins-Bears game.

“It was pretty cool,” Gettis said of playing a professional game down the street from where he grew up. “Just coming back home, it was an awesome experience. Being a Bears fan growing up, it was an awesome feeling and I’m glad I get to be a part of this team — to work with them and be out there. It was special to play against the Bears, but we’ve got a great organization here and my family definitely had to switch allegiances. I’m glad to be a Redskin.”

Because the offensive line has already been decimated by injuries to right tackle Jammal Brown and guards Chris Chester and Kory Lichtensteiger, guys like Gettis are getting valuable repetitions with the starting unit that they otherwise wouldn’t be able to experience.

“I’ve got a lot of things to work on,” he said when asked how he’s fared through his first two games. “As a rookie, you’ve got everything to work on — fundamentals, you can work on seeing things quicker — I’ve just got a lot to work on. But getting those reps out there, you see the game is starting to slow down for me a little bit more. You know, the more you play the easier it gets.”

As if learning everything expected from an offensive lineman in this offense isn’t enough, Gettis and fellow rookie Josh LeRibeus also found themselves out there with the special team unit against Chicago. The duo formed a wedge on at least two kick returns against the Bears, so I was interested to hear what that was like for a player I was guessing hadn’t been asked to do that in a while.

“It was fun, man,” he said with a laugh. “That was our first time doing it, so it felt good just to run downfield and hit somebody. Me and Josh had a good time doing it while we were out there, so hopefully we can keep on doing it because I think it’s fun. It kind of reminded me of playing defense in high school where you can go out and destroy somebody. That’s what we wanted to do and I’m going to continue to try and do.”

The Redskins used a fifth-round pick (No. 141 overall) in the 2012 NFL Draft to select Gettis out of Iowa, a college program that just so happens to utilize a zone-blocking scheme. While he might be a little undersized for some offenses, his head coach in Washington was pleased to land him.

“Yeah, he’s got the quickness we look for, kind of like Kory Lichtensteiger,” said head coach Mike Shanahan. “You know, he can play center or the guard position. He’s got speed. You can never have enough depth in that offensive line. That’s why I think it was big for us to get three offensive linemen that we were hoping we were going to get before the draft started. And we weren’t really sure when they were going to go, but we were counting on signing three if we could to add some depth to our offensive line after the injuries last year. And all three guys we got, we targeted, and that doesn’t happen very often. So we are very happy with the depth on the offensive line.”

And if Shanahan is worried about missing 60 percent of his projected starting offensive line, he isn’t admitting it to us. Instead, he prefers to focus on the positive — namely giving young guys a chance to show what they’re made of.

“We have a chance to evaluate some guys, and get them some valuable experience while a few of these starters are out,” he said. “That’s really important when they learn your system in the offseason . They get a chance to go through the OTA’s. They get a chance to go through the summer camp. But the bad is when you don’t have much depth to start with. If you only have 6,7, 8 guys and two guys go down, when you bring somebody in, they have to learn the system completely. We’re much better off than we’ve been, but hopefully we’ll stay healthy and get a couple of guys back.”

While Gettis believes there’s plenty of work for him to do, some of his teammates are already seeing something special out of him.

“He’s been playing his butt off,” said left tackle Trent Williams. “We couldn’t be more pleased with his effort and the way he goes about working everyday. No complaints out of him. He brings his lunch pail to work every day and busts his butt.”