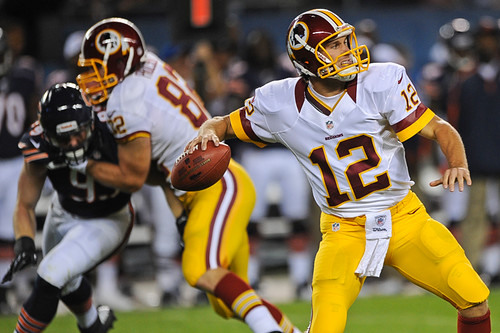 Forget the final score. Sure, it’s nice that the Washington Redskins were able to make their preseason game against the Chicago Bears competitive before ultimately falling to the home team, 33-31.

But at the end of the day, no one should give a damn whether or not the Redskins remained undefeated during the exhibition portion of their schedule. When it comes to preseason games, teams just want to a.) stay healthy and 2.) get young players playing time against someone other than their teammates. That’s it.

Honestly, ‘Skins fans should be thankful those are the two areas of focus during this time of year because Washington’s starters were thoroughly outplayed by Chicago’s during the relevant portion of this contest.

From their first play on offense, the Bears imposed their will against the Redskins — scoring on three of their first four possessions while racking up 262 yards in the first half.

And things weren’t any better on the other side of the ball either, as rookie quarterback Robert Griffin III was essentially running for his life behind a patchwork offensive line that struggled to protect the face of the franchise in this one.

RGIII looked great in his debut, but that’s probably because Buffalo never laid a hand on him during his limited action. Well, things were much different the second time around as Griffin, who completed five of eight passes for 49 yards, was sacked three times and pressured throughout the night.

Washington’s first six drives resulted in four fumbles, a fumble and a field goal. The score was 20-10 at the half and 30-10 after three quarters, which should give head coach Mike Shanahan and friends plenty to work on between now and the start of the regular season.

Now that we’ve covered the basics, here’s why there’s no need to hyperventilate over the less-than-stellar showing by the burgundy and gold:

“It’s preseason. We’re going into games blindfolded,” said outside linebacker Brian Orakpo. “We’re not gamplanning. We’re not looking at who is playing and who is not. We’re just running some calls and seeing if it works.

“They got us on some plays and opened the game with a big bomb,” he continued. “Obviously that’s something we’re not proud of with how we started the game. But guys came in and finished it strong. Even though we lost, it was a good game. But as starters, we need to get better.”

Against Buffalo, quarterback Kirk Cousins was pretty unspectacular — completing nine of 22 passes for 74 yards with an interception. One week later, the Michigan State standout showed critics why the Redskins were willing to draft a second rookie quarterback in the 2012 NFL Draft.

Cousins must have thought he was playing in the Big 10 once again, as he picked apart the Bears while completing 18 of 23 passes for 264 yards with three touchdowns.

“Kirk Cousins, let’s put it this way. I hate quarterback controversies, but after how he’s played so far, people are gonna say that.”

This, of course, is the dumbest thing you’ll read all week. No team — the Redskins included — surrenders up a bounty of high draft picks for the right to draft Griffin and then gives up on him after less than one game’s worth of action.

The Redskins are Griffin’s team. The second quarterback on the depth chart is still Rex Grossman. So while it was enjoyable to see Cousins play so well this week, at the end of the day it didn’t really change anything.

Washington entered the Bears game without the services of three starting offensive linemen — Jammal Brown, Chris Chester and Kory Lichtensteiger. By the time the first half ended, two more starters were knocked out of action — Orakpo and safety Brandon Merriweather.

Orakpo injured his shoulder while trying to tackle receiver Devin Hester in the open field late in the first half, and remained on the ground for several minutes. A few plays later, Merriweather needed to be helped off the field after injuring his knee.

“It’ll be alright,” Orakpo said after the game. “I’m going to get an MRI in the morning, but I’m fine. My strength is here. When you have a surgery, scar tissue builds up and when it breaks apart it kind of feels like you tore something, but that’s not the case. I’m fine.

“On that tackle, I overextended it to where it was uncomfortable,” he continued. “It was kind of scary at first and I thought I did something serious, but I came in the locker room and my strength’s still here and everything is still intact. We’re just going to clarify everything in the morning, but it’s nothing to worry about.”

Thankfully for ‘Skins fans, Orakpo knew what he was talking about — as the MRI showed no signs of a serious injury to the Pro Bowler’s left shoulder, according to Orakpo’s agent Ben Dogra. Merriweather also received good news, as his injury isn’t thought to be serious either.

Now the starting offensive line just needs to get back onto the field by the time the team travels to New Orleans and everything will be good to go.

While moral victories are for losers, it was still a welcome sight for local fans to see players such as returner Brandon Banks, receiver Aldrick Robinson, wide out Dezmon Briscoe and converted tight end Niles Paul rise to the occasion in Chicago.

Aside from Paul, who is assured a roster spot, each of those players has plenty to prove between now and when the final 53-man roster is set. And let’s be honest, while plenty of people continue to sing Paul’s praises, he hadn’t really done much other than drop passes since he moved to tight end.

Banks returned a punt 91 yards for a touchdown just before halftime, giving him a special teams score for a third-straight preseason, and Robinson, Briscoe and Paul each caught touchdown passes from Cousins during the second half of action.

It goes without saying that the better these fringe players perform, the better things are for Shanahan and friends as they try to assemble the best roster possible. The concept of depth hasn’t always been associated with the Redskins, but the two-time Super Bowl winning coach has done a masterful job of replacing an over-the-hill roster and giving youngsters like these a chance to shine.